A Day in Tel Aviv

It was my second day in Tel Aviv and I had decided to devote it mostly to street photography. In order to do that I would visit two of the city’s greatest sites, the Hayarkon Park and the famous city promenade. I would start at the east part of the park and walk along Yarkon River all the way to its mouth which is just north of the port. From there I would turn south and walk the promenade up to Hassan Bek mosque.

Before going there, I wanted to see the museum of  art, even though I knew that there wouldn’t be time to visit it since it was Friday and it would be closed early for the Shabbat. Even so, the magnificent building that houses the museum was a good enough reason to take the half an hour walk. 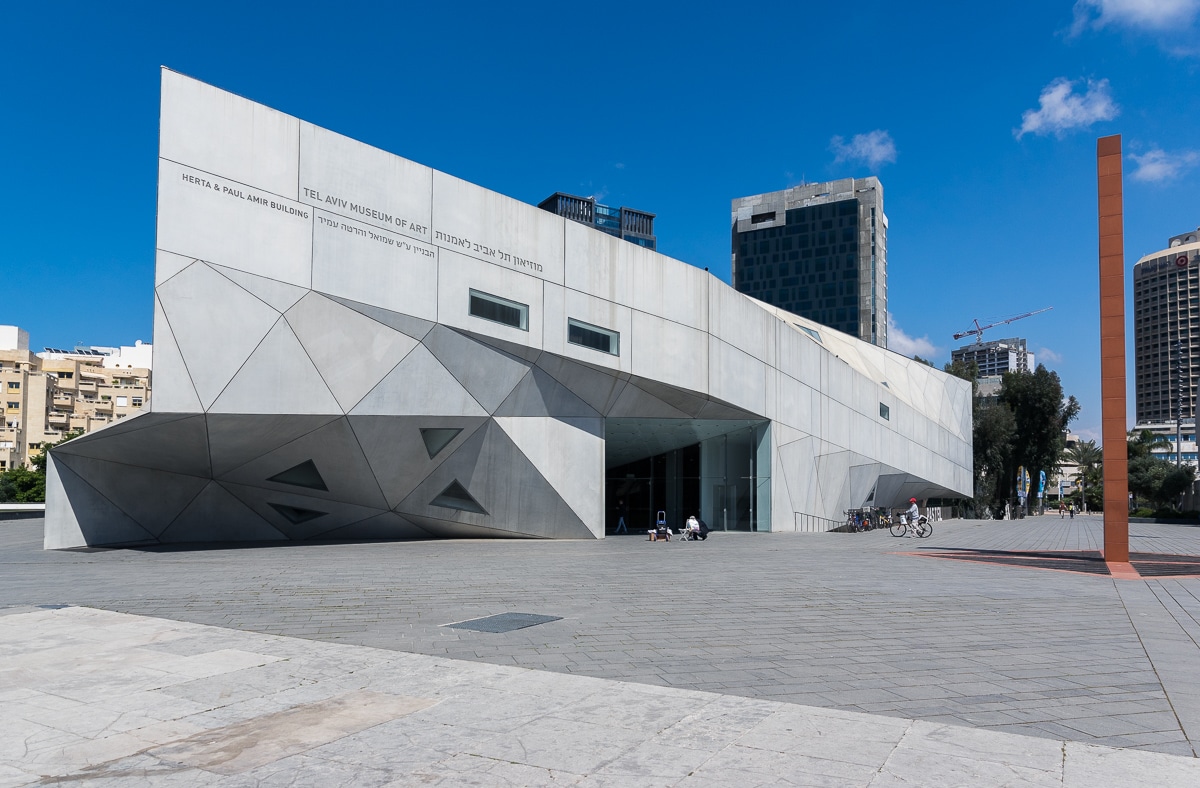 Indeed the building looked like nothing I had seen before. There is not a single curve on it. It is made from several mostly rectangular and triangular flat concrete surfaces which are divided by small gaps, giving the impression that the whole construction is made out of paper. Some of these panels have triangular windows; they reminded me Star destroyers—the Imperial warships from Star Wars.

It was quiet, so after I fooled around for an hour it was time to go. The reason why I decided to walk to Hayarkon Park from the art museum is a mystery to me until today. I didn’t mind the extra hour, it was just that between the museum and the park, there are only office buildings, lots of traffic and not any people. So walking around there with a camera was rather pointless and I would had  prefered to have spent that time on the promenade. 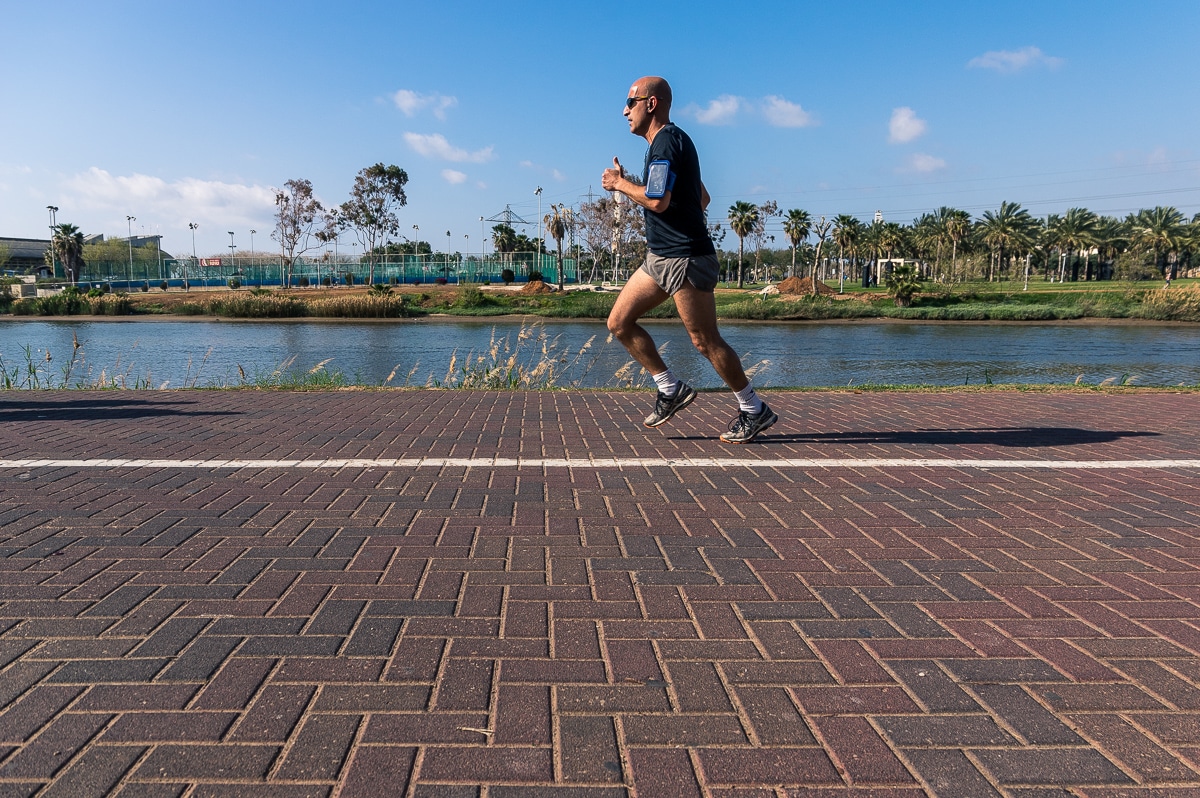 Finding your bearing around Hayarkon Park can be challenging. It is spread on a vast area which gradually narrows and occupying the banks of Yarkon river which flows to the Mediterranean Sea.

Except for the elaborate gardens, there were also extended areas with “wild” vegetation away from the trails where people had picnics or gathered herbs. When you’re there, Tel Aviv disappears behind a wall of vegetation and you can only see some tall buildings, far away into the horizon which gives the park a sense of remoteness. 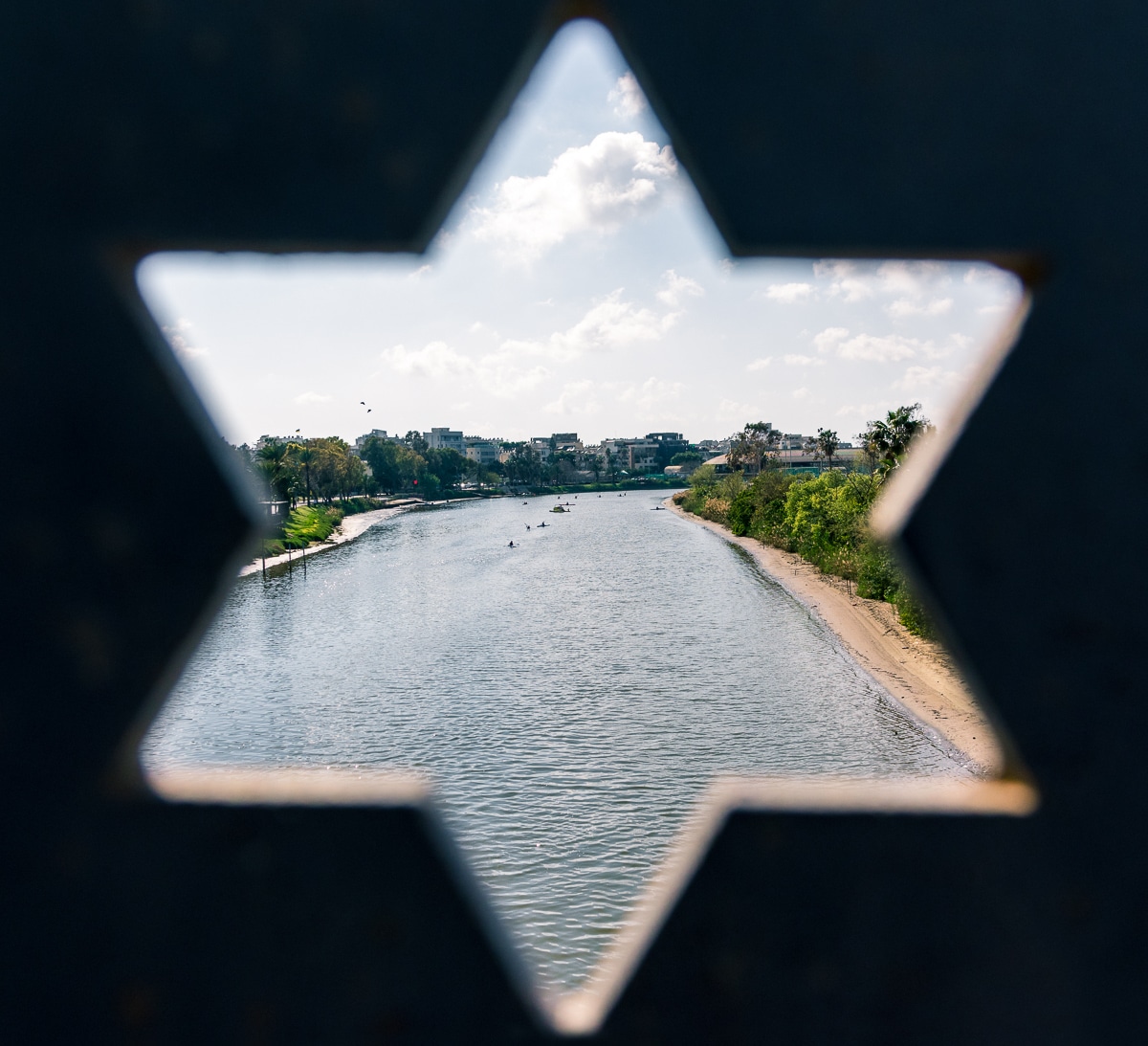 For a moment, I forgot I was in Tel Aviv; lakes, dirt roads, wooden lunch tables and the Yarkon River full of colorful canoes paddling up and down the stream drew a landscape that was more rural than urban. Lots of people were using the numerous sports facilities while others just enjoyed a jog. There was also a mud race sponsored from a known brand that day. It was fun to watch the runners covered in mud as they were running from obstacle to obstacle. 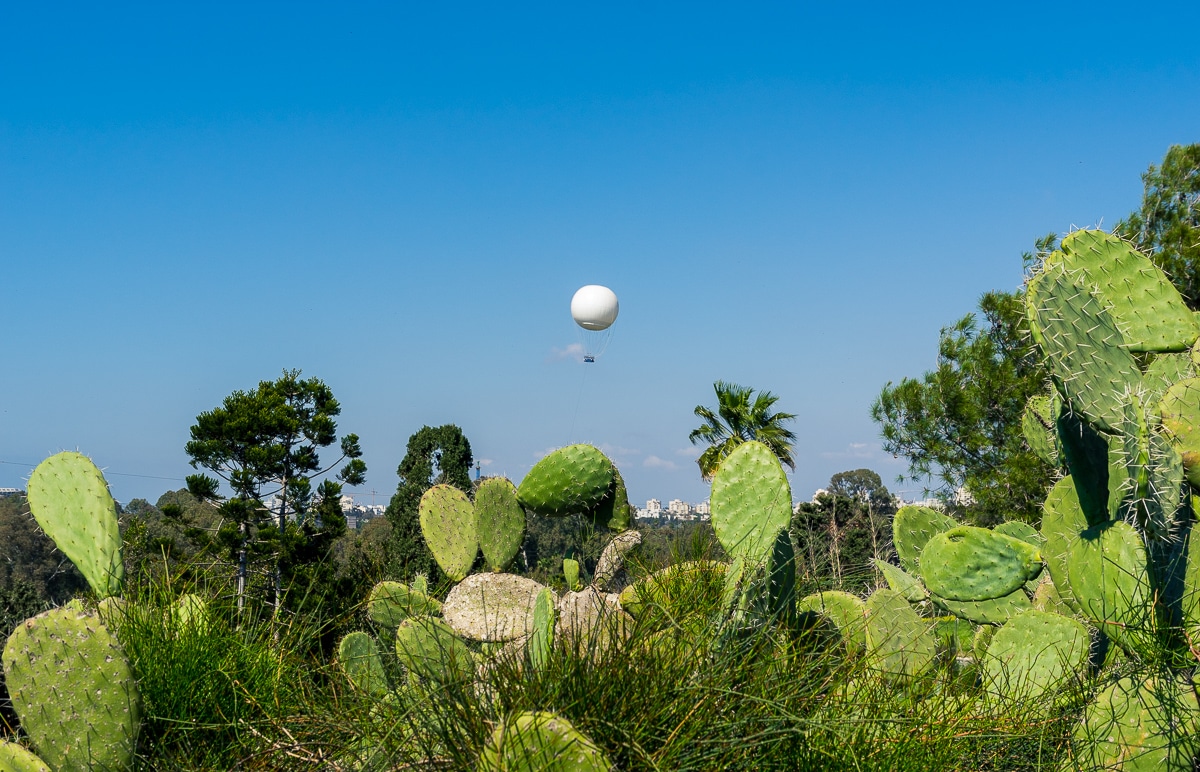 I have to say that most of the locals seem to adopt a very healthy lifestyle. Bicycle usage is widespread, and the number of people running or exercising throughout the city was impressive. Families were outside, doing activities rather than sitting somewhere and drool over their phones. I really liked that. I could have spent the whole day in Hayarkon Park and still I wouldn’t manage to see all of it. I strolled along the river, mostly shooting and briefly stopping here and there.

Without realizing,  a couple of hours had flown by the time I reached the seafront near the port. On its north side, was a nice dock laid with thick wooden boards and a white and red carousel in the middle. I stopped in the small food plaza  for a quick coffee which was pretty good.

The promenade was buzzing with people of every age, religion and color enjoying their afternoon stroll. Seniors were walking slowly up and down while youngsters with roller blades and skate boards swished past everyone. People playing beach volley and rackets, small outdoor gyms and slackliners, DJ parties and street artists. This place is vivid! 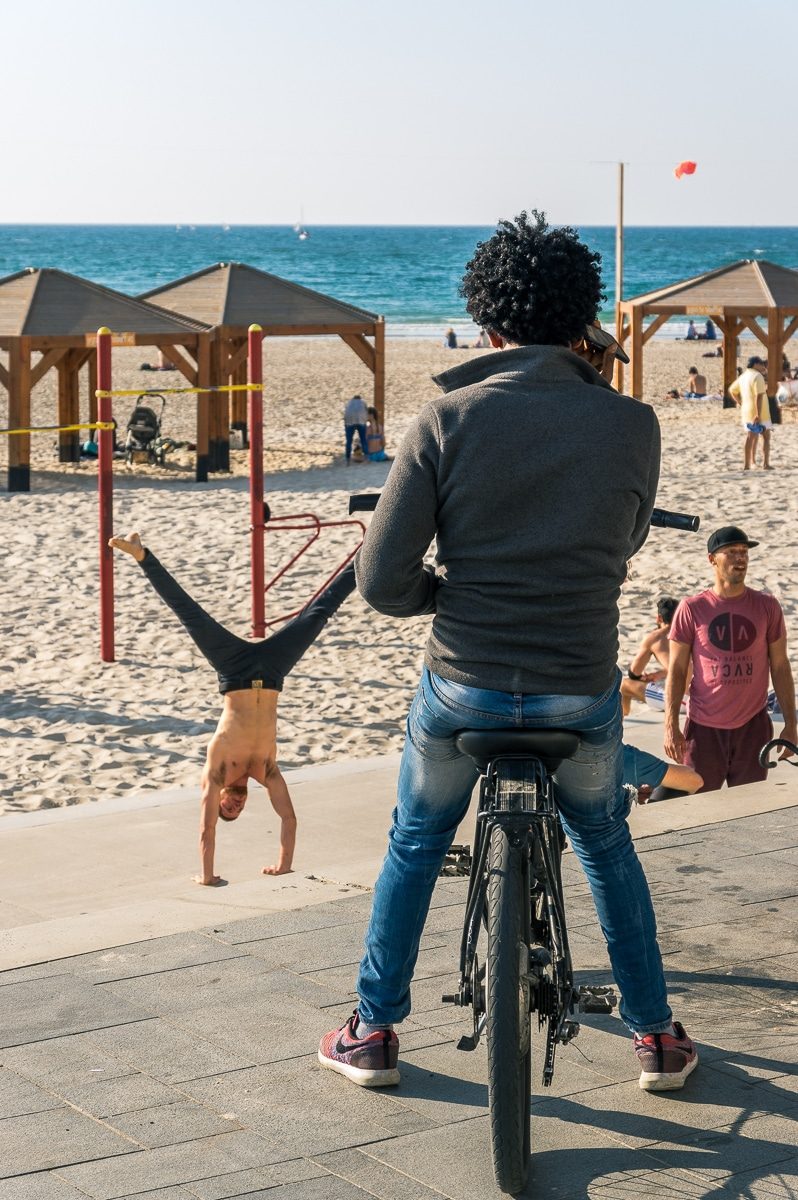 Influences from the US were plain to see everywhere. You get the same vibe like you do while watching pictures from Venice beach with the body builders, the hipsters and the street performers. Lots of characters around and the best of all, everybody is cool about having his picture taken. Most didn’t even pay attention to me which was ideal. I hanged around musicians a lot, and all of them,and  I have to say all were performing way above average. Like the had been auditioned before getting their permit. 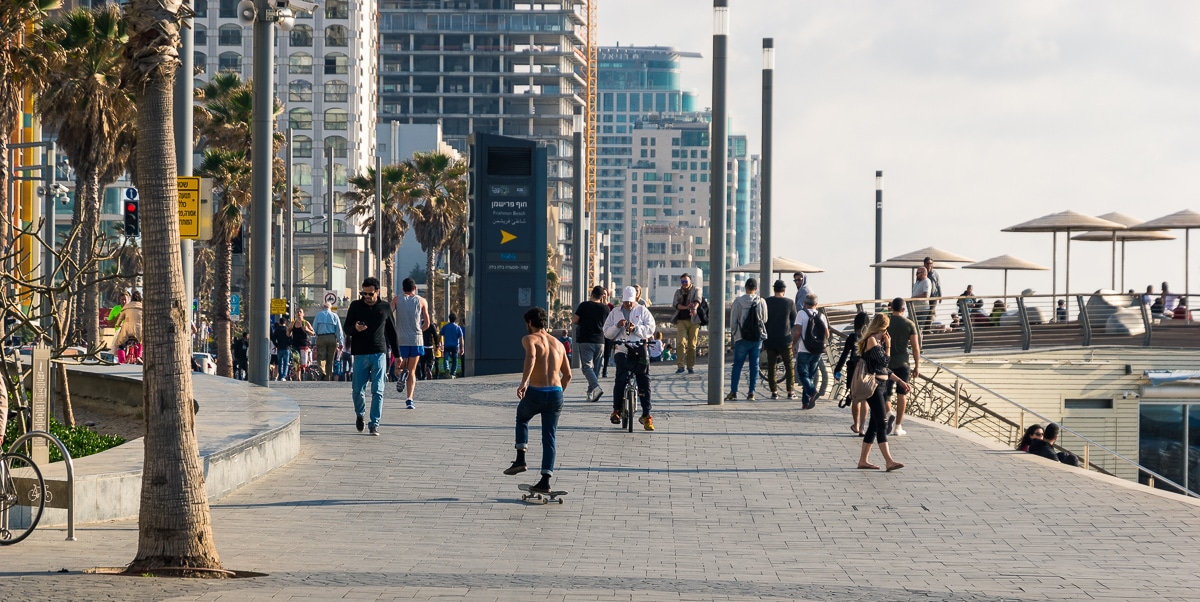 I could see there were different crowds around every beach. Families, party goers, hipsters, and surfers doing their thing on beaches distinctively named Gordon, Metzitzim, Banana, Jerusalem and Hilton. 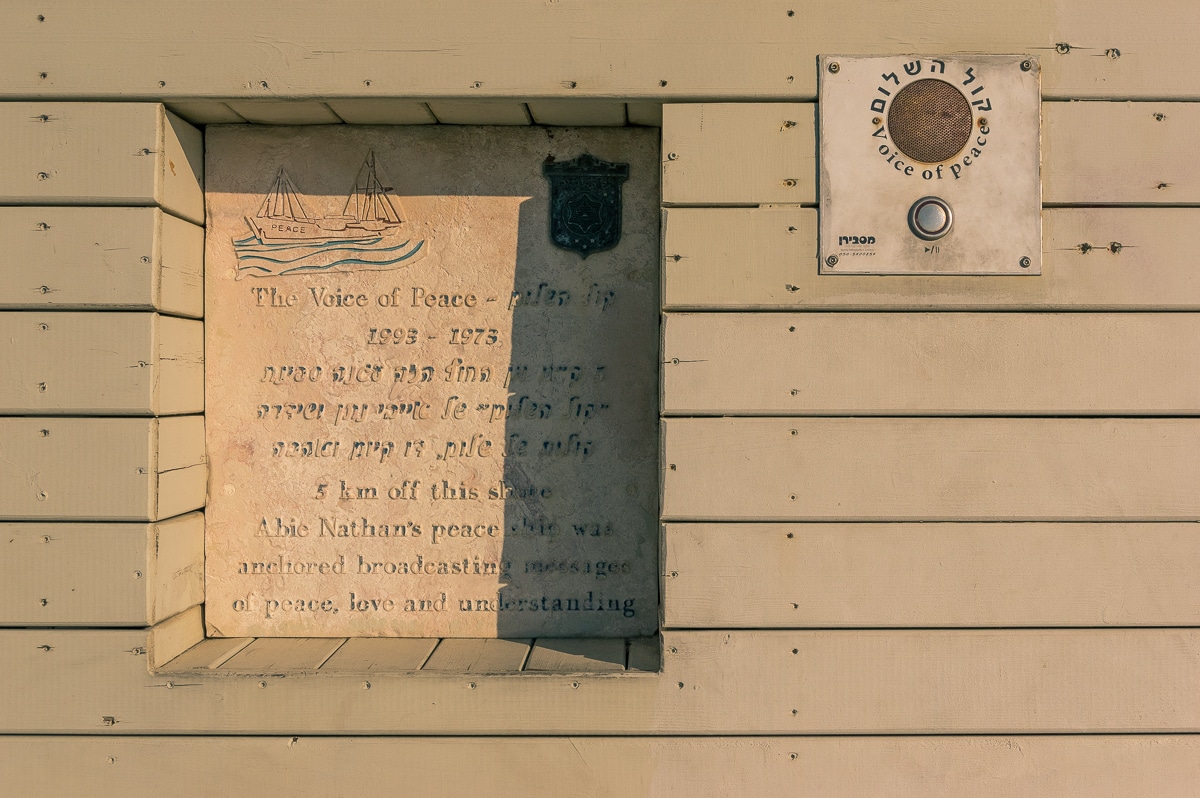 The Voice of Peace was a legendary radio station which broadcasted from an old ship five kilometers off the coast of Tel Aviv. It was operated by Abie Nathan—an active pacifist and humanitarian who had managed to support the whole project with the help of John Lennon and other personalities of that time.

The station was immensely popular to Israelis and Palestinians alike since it was the only media that gave both sides the ability to be heard and communicate through its telephone forum. For this reason Nathan was able to keep it running for twenty years even though the Israeli government didn’t like it at all. They did manage to put him behind bars for half a year in 1991 though. The station broadcasted in November of 1993 for the last time and MV Peace—the ship from where the station was emitting eventually got sunk by Nathan on November 28th. A memorial plaque next to a speaker at Gordon beach is all that is left to remind what the Voice of Peace once was.

The minutes became hours and as the afternoon wore on and got a soft golden light. The volume of people lessened but there were still hundreds around me at any given moment. When I reached Banana beach and Hasan Bek mosque, it was time for me to call it a day. I walked a bit more towards Jaffa and then turned left through Neve Tzedek and its little houses for one last time. 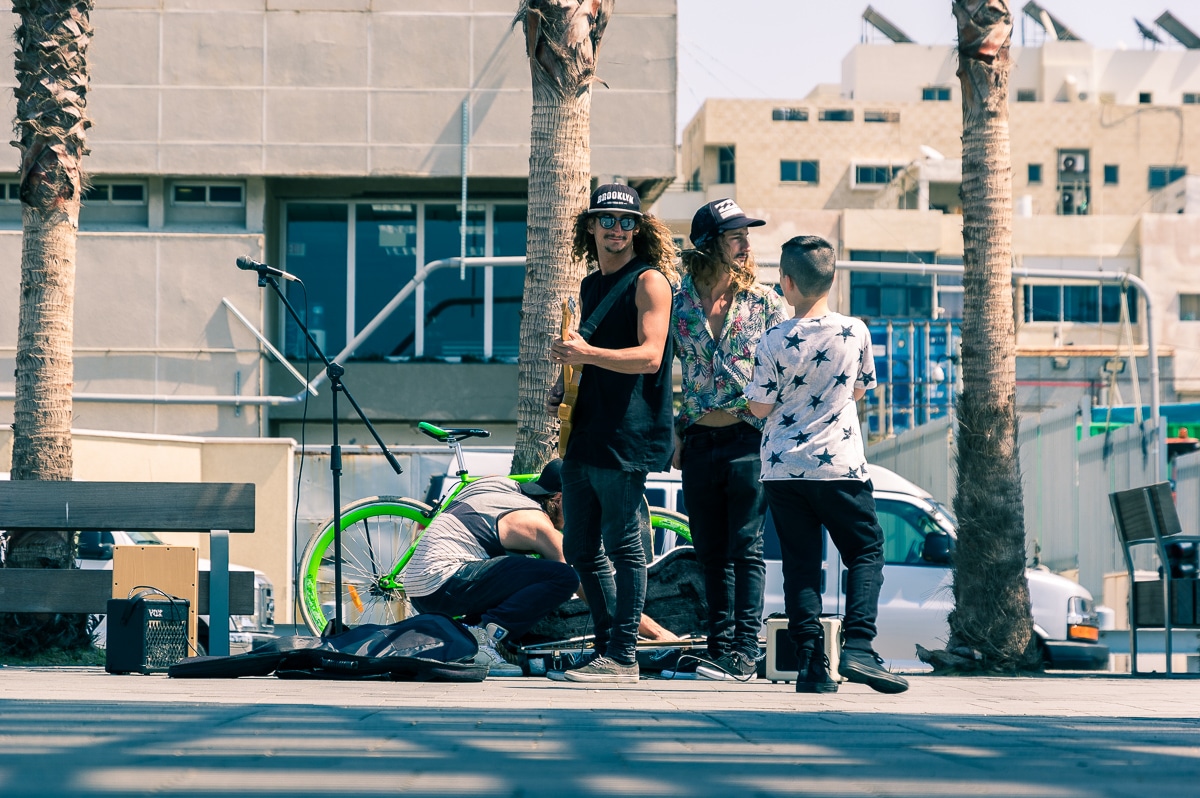 All in all I had a great day in Tel Aviv. Nothing out of the ordinary but still the kind that sticks in the mind for a long time. I definitely have to return back at least once more. I already feel nostalgic as I go through the pictures I shot that day on the beach. 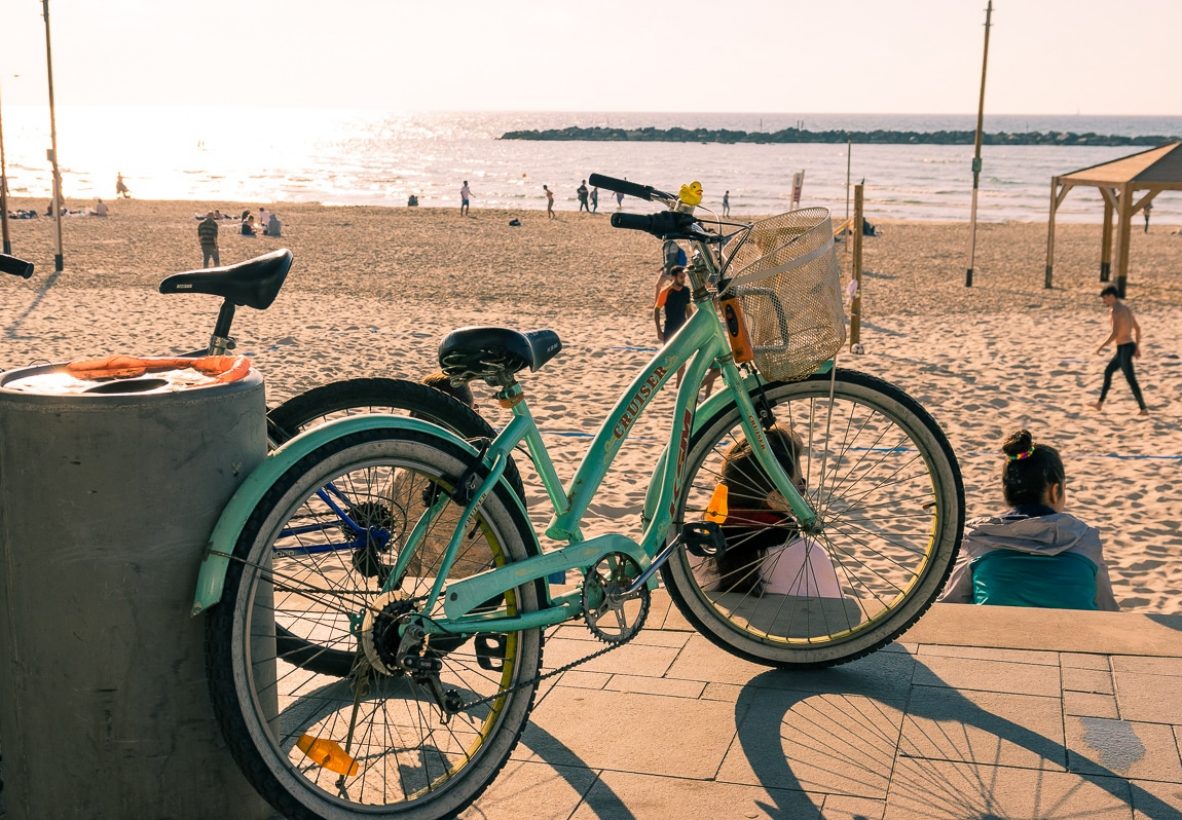 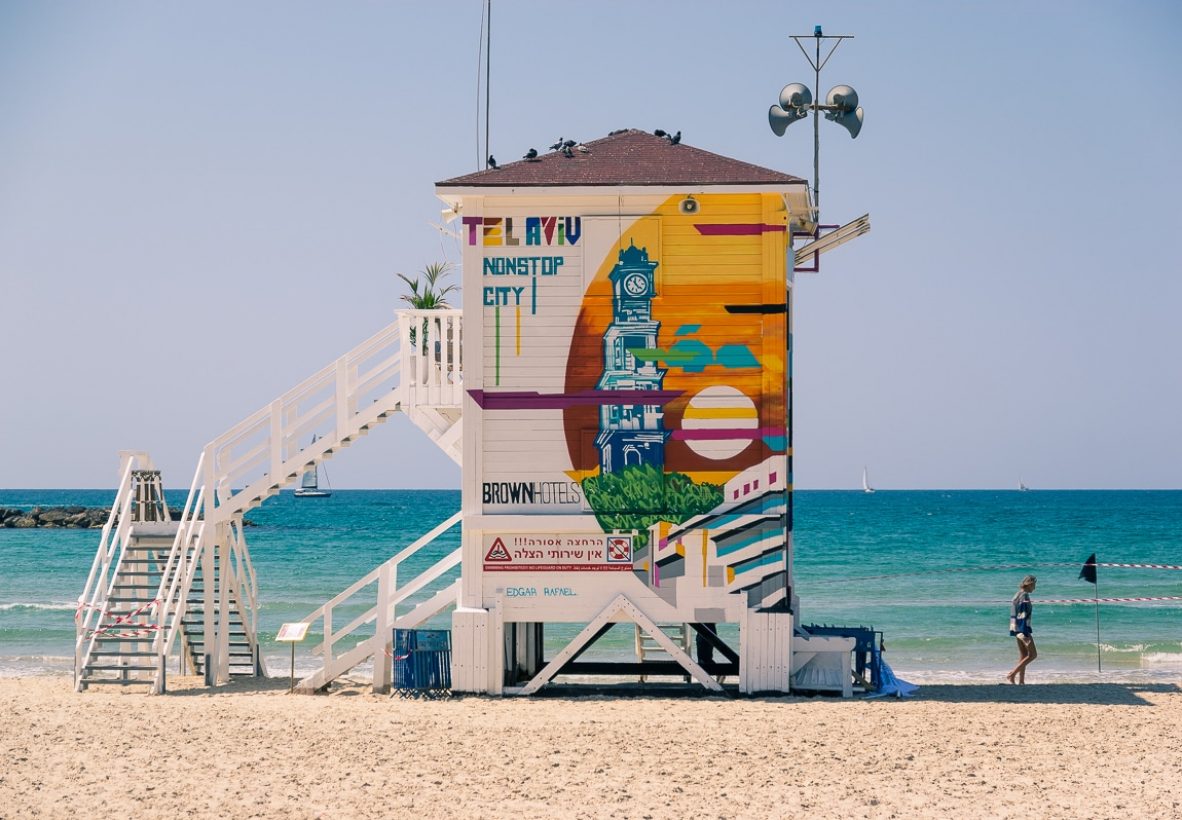 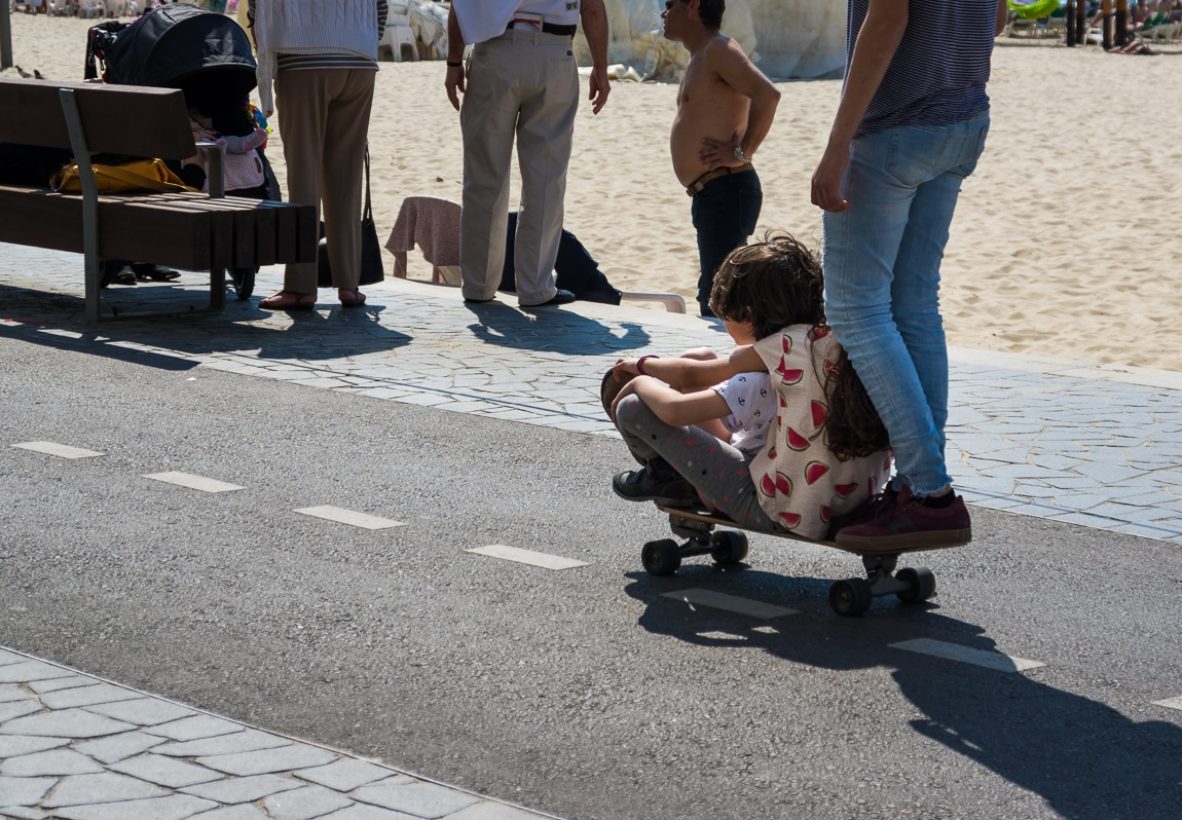 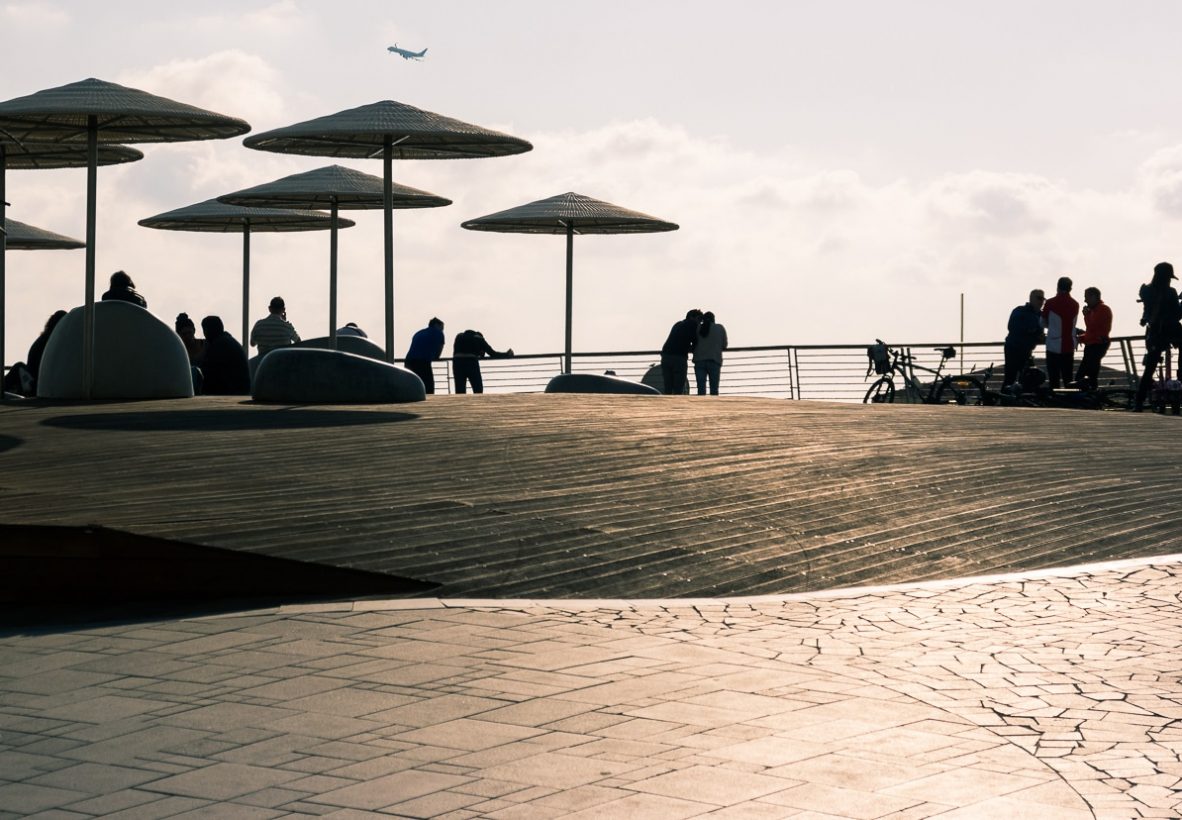 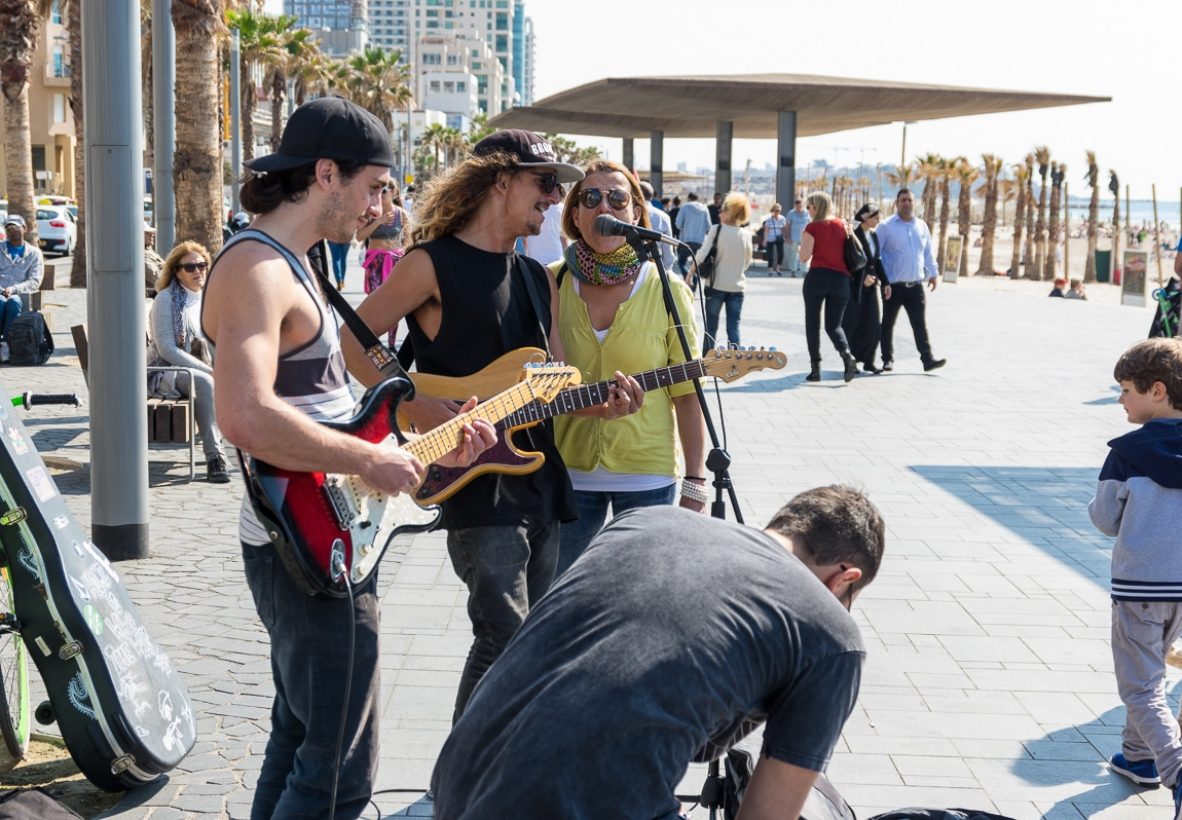 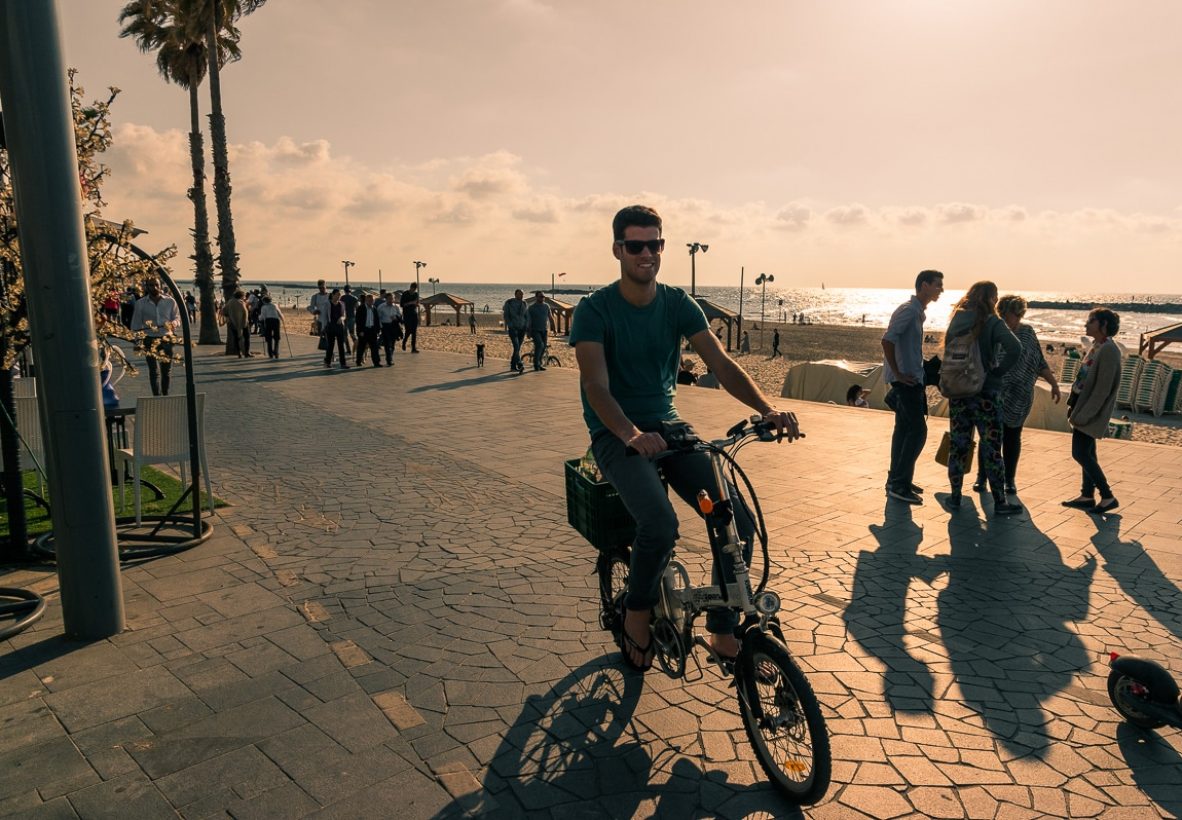 Map
Posted in Asia, Israel, Middle East, Tel Aviv, Trips
Would you Like to Subscribe to Our Notifications?