Our fifth day in Zagori started with a hearty rural breakfast. It was splendid with five types of homemade jam and cheese produced by the owners among other things. You just can’t beat top ingredients no matter what you cook out of them.

The day’s hike was simple and fairly easy. The guide would drop us outside Vradeto—the highest village in Zagori. From there we would walk to one of the most visited sights in the region called Beloi—a breathtaking viewpoint above Vikos, no more than twenty minutes from the village. Then we would return back and descend from the prominent skala of Vradeto—a stone–paved trail which ends near Kapesovo village and until 1974 was the only connection of the village with civilisation. Finally, we would hike through the woods to the village of Kipi—our base for the next two days.

Vicky, our guide for the day, drove for twenty minutes before stopping on a sharp left hairpin not far from Vradeto. A trail started there leading to the small cemetery just outside the village. Why drive when you can hike, right?

Fifteen minutes later we were hanging with a donkey that was outside the cemetery’s gate all by itself. We left the animal alone to eat its grass and kept walking south into the village. It was Saturday and the place was busy with people who had come to trek and see Beloi. Most of them were sitting outside a café in small groups. They had come from the city of Serres and belonged to an elder’s walking club. They seemed very jolly and active. In fact, they looked more like students in a school trip than seniors. We had a short conversation about our hikes and how many days we were in Zagori.

Eventually we left them behind and walked east till we got out of the village and caught the trail to Beloi. It was relative flat and for once more scattered with cows. Twenty minutes later, the path took us through some limestone formations which shaped a corridor and sooner than later we were on the perched stone balcony at the edge of Vikos’ west wall, known as Beloi. The view was awe inspiring. And for the first time we realized the full extent of Vikos’ abysmal depth. The gorge makes a forty five degrees left turn just in front of the viewpoint, aligning in a way that the balcony is looking straight into the gorge like a theatre gallery in front of the stage. It was majestic. I couldn’t stop thinking how great it would be if I was here during the sunrise or just a moment before the sun would hide behind Tymfi. We enjoyed five minutes by ourselves before a group of hikers arrived. The balcony doesn’t have space for more than ten people, so we packed our tripod and cameras and took the road back. 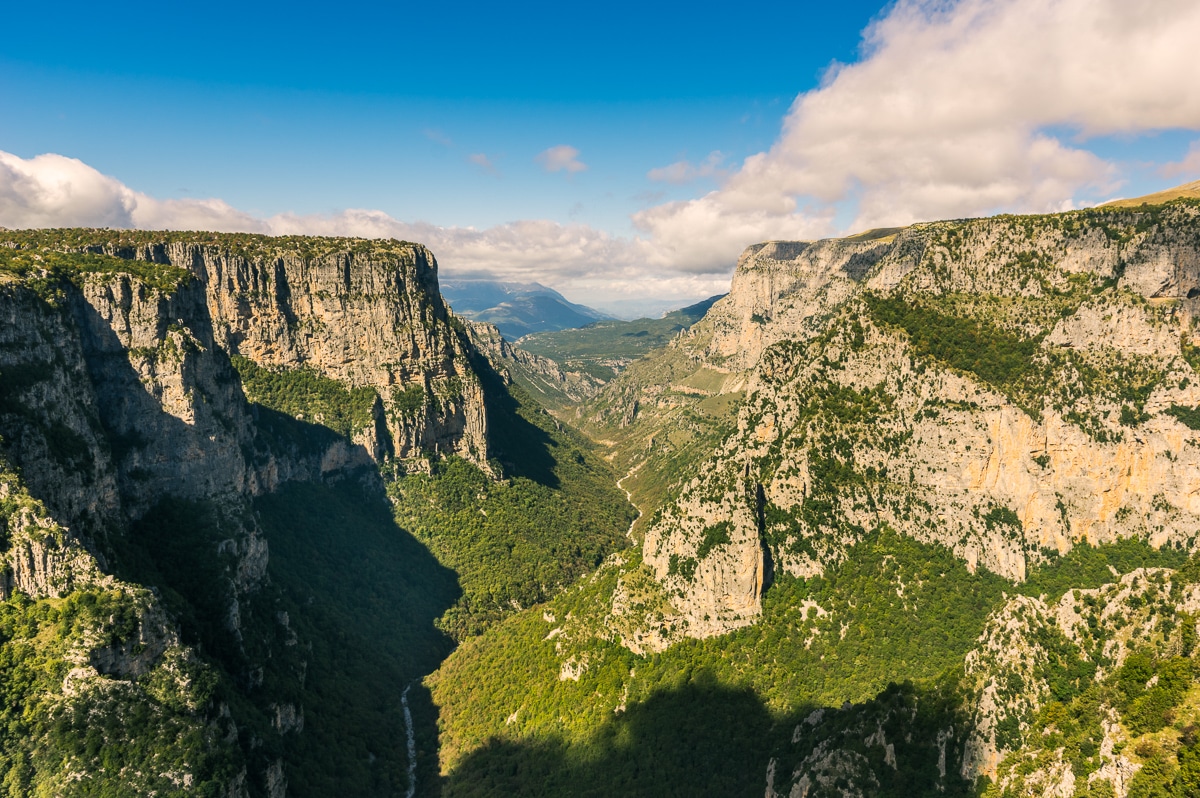 Vradeto (1340m) is famed for its skala—a small paved road, which was the only way for people and animals to get to the village till 1974 taking them around an hour to climb its 250 vertical meters. The handmade structure took twenty years to finish and today is the most impressive and well maintained skala in Zagori with more than a thousand steps and almost forty bends. The massive construction is made of local stone making it barely visible when observed from the main road. 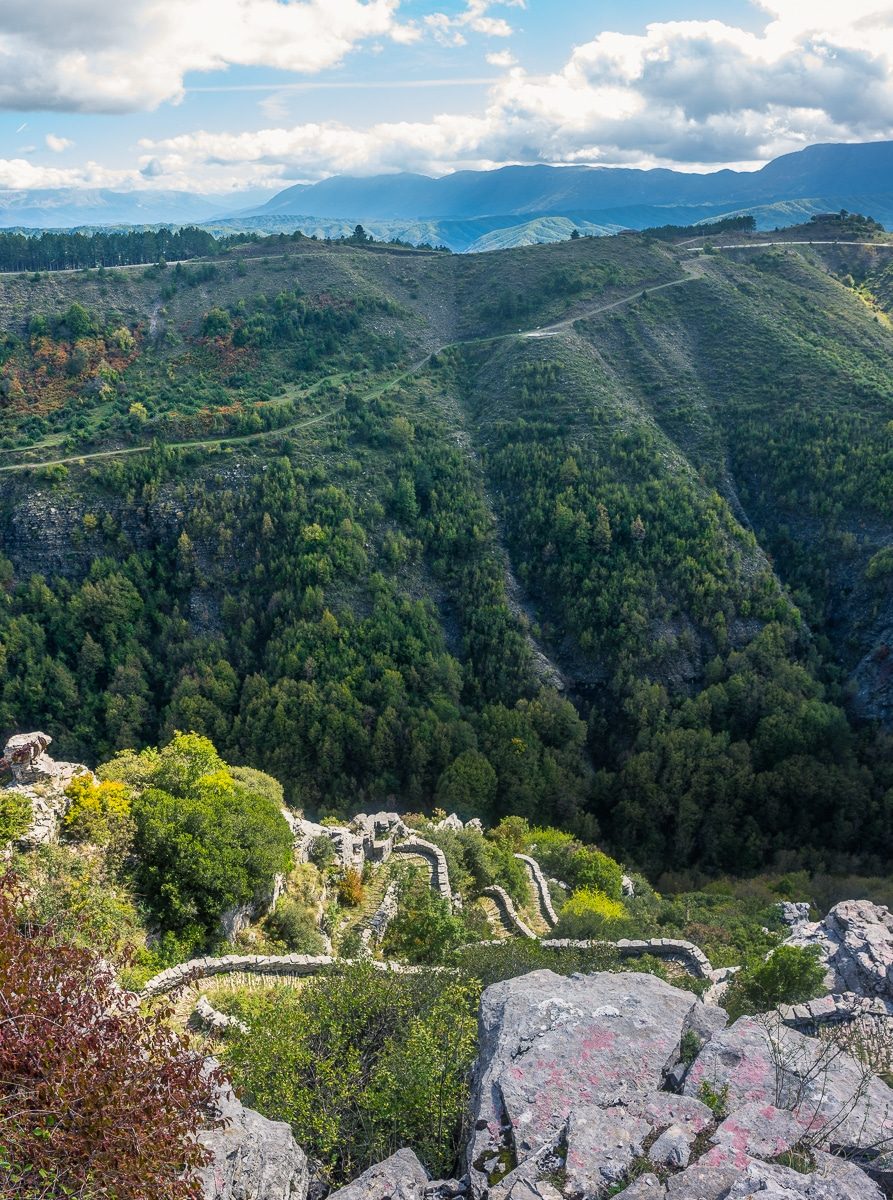 While hiking, I couldn’t help it but count the small carved stones that were wedged there like a lego by the local craftsmen. Probably there are more than a million. When I wasn’t looking down, I admired the magnificent view to the mountains of the infinite country and the little village of Kapesovo on the hill opposite. We encountered many people on our way down that Saturday. It’s a great walk but definitely not suitable for people with weak knees. 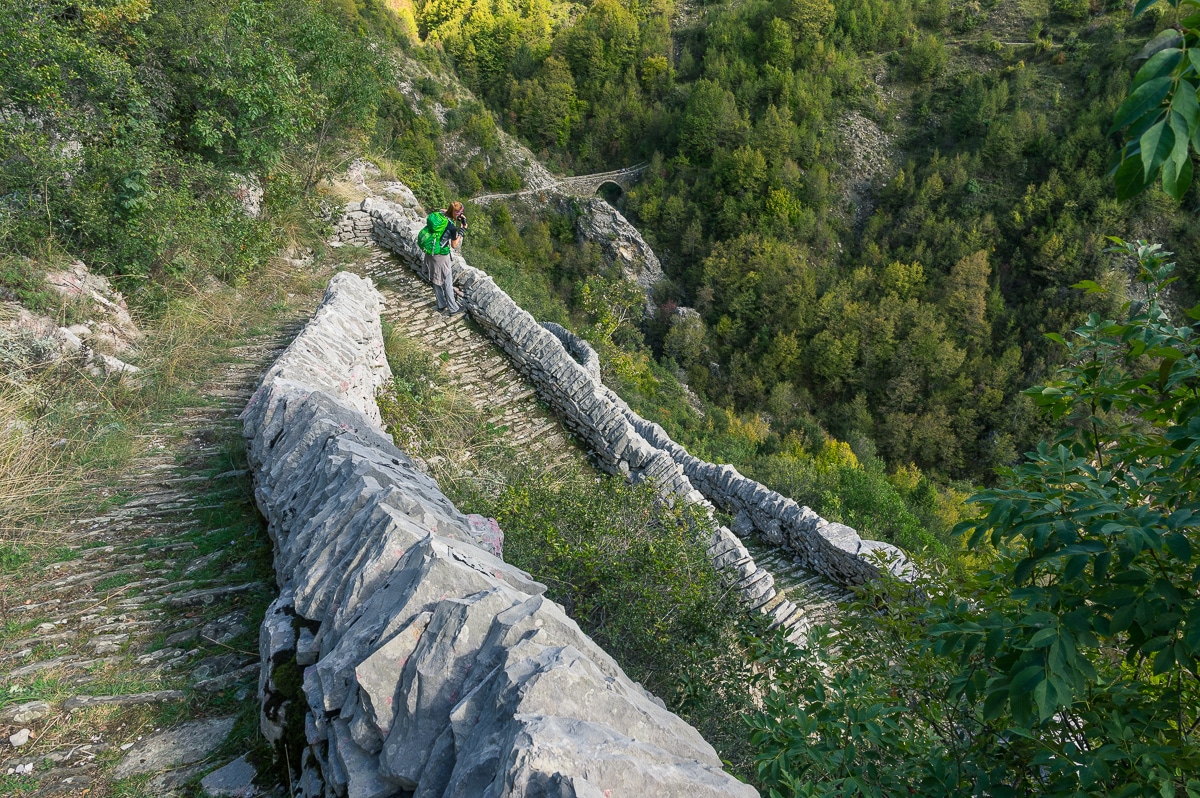 At the bottom, we crossed a small arched bridge and walked for another ten minutes on the road up to the entrance of Kapesovo. This village’s cemetery is built on top of a fort–like structure which is seven or eight meters high. There, the tarmac ends and a beautiful calderimi takes its place. These cobbled roads can bring a place to life. Even an almost deserted little village like this one. It is the way the stones are perfectly laid and their seamless connection with the houses which are built of the same material. It is even the thin grass that grows through the stone gaps as nature claims back the material that people took. 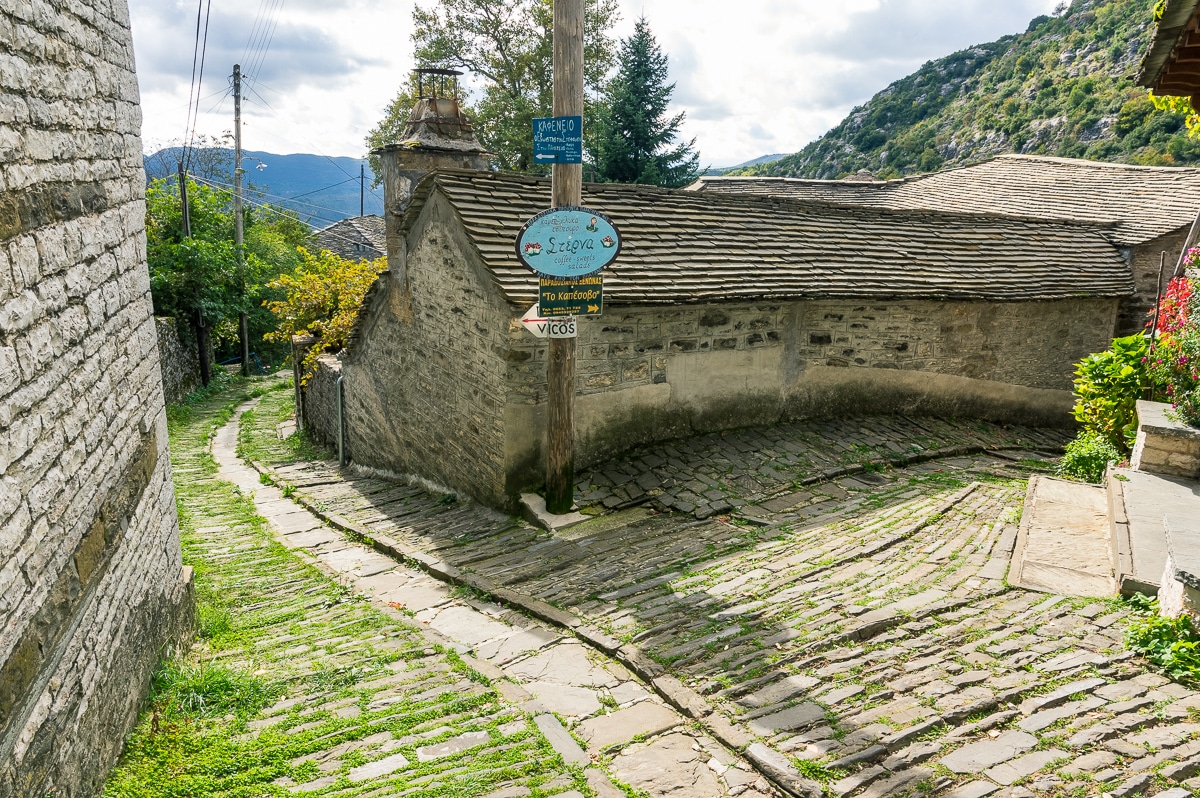 Walking down the narrow alleys, we met no one but a cat and a dog that were getting some sun, laid in the middle of the way in the laziest and most care–free manner.

Time really stood still around here. On the square we found a cute small shop with a couple of people sitting outside. It was tiny loaded with local products from the floor to the ceiling. Herbs, handmade knickknacks, liqueurs made from local fruit, dry mushroom and jams.

Anna, the lady owner was very warm and pleasant. She pointed a bulky furniture which was in the middle of the small shop and told us to have a look through the glass on its top. Amazingly when I leaned over, I saw a whole cistern several meters deep. It was cylindrical, around two meters wide and carved in the solid stone. For a moment I stopped and tried to process what I was seeing.

“It is part of the church of Saint Nicolaos which is just behind” said Anna. It was empty of water and I could see its bottom several meters below the shop. When I lifted my head, the shop was looking different, more magical like a place from the Land of Oz. 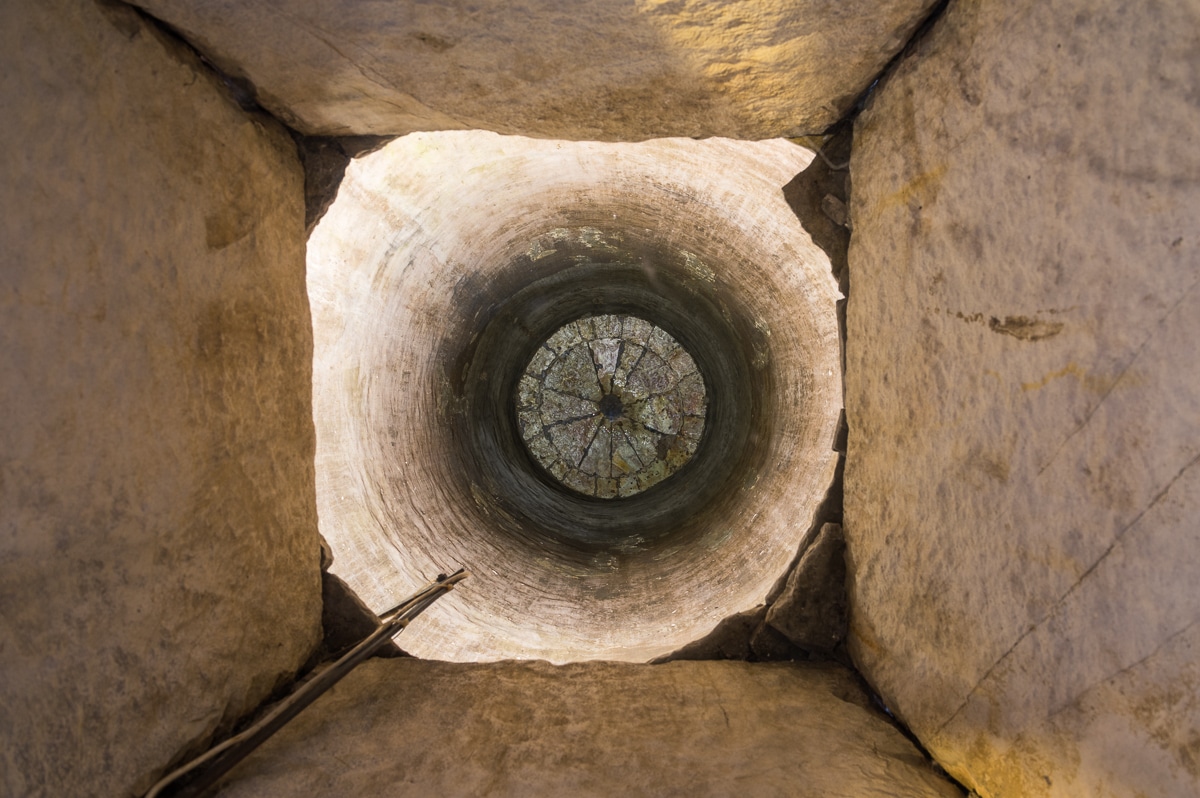 We bought several things, ordered tea and went outside on the little blue benches. There were a couple of coffee shops around but none was open. The square itself was empty except from the old plane’s yellow leafs on the ground and another dog enjoying the quietness.

We asked Anna if we could have our lunch right there and not only she allowed but gave us tomatoes from her garden too. Thin skinned, aromatic and a tad sweet, like a real fruit should be. She, and her husband also maintain a traditional guest house not far from the square, called “Thoukididis.”

“How many people reside in Kapesovo?” I asked. “No more than ten or twelve,” she replied. “Cats and dogs outnumber people here. Sometimes loneliness can be overwhelming in the winter.” Indeed I could imagine how difficult things could get. It is obvious that most people who stay in Zagori, have chosen the hard way over the easy one for the quality of a life where they wouldn’t have to live by the clock, but a hard life nevertheless. 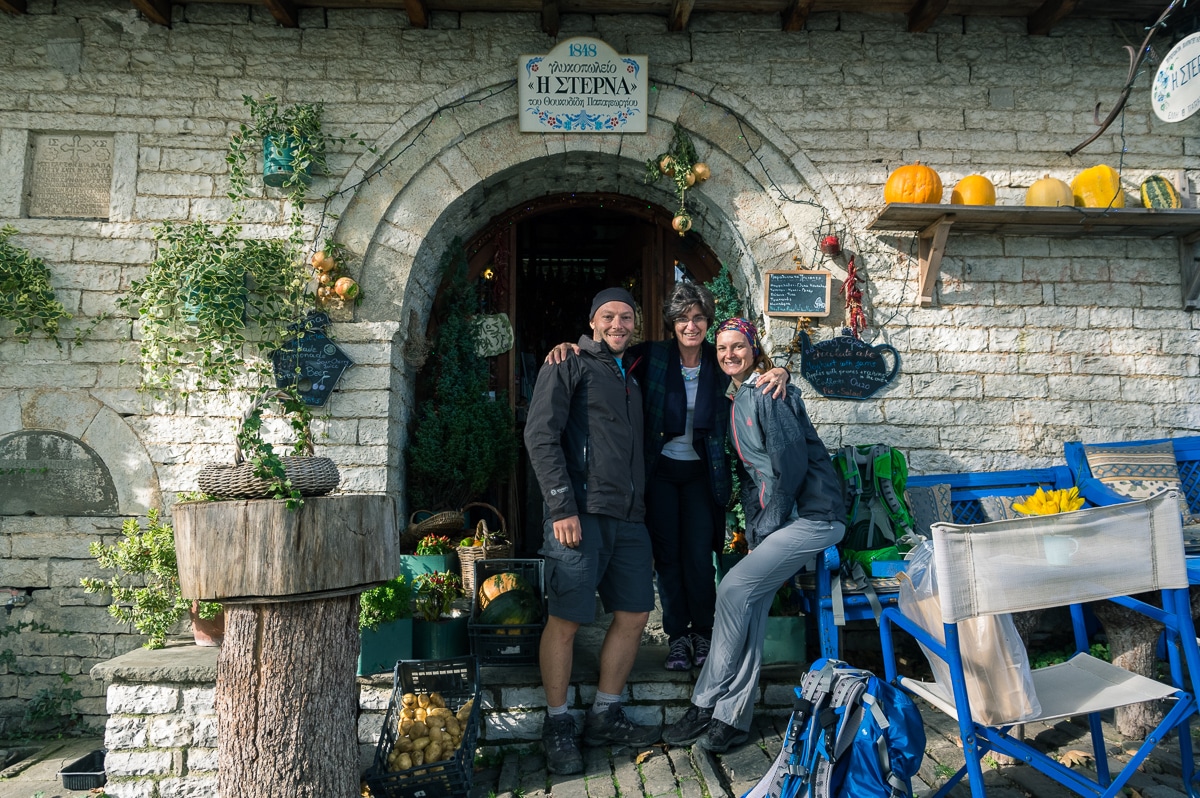 We thanked Anna and went back on the road leaving Kapesovo behind and walking into the forest towards Kipi. At some point we crossed the main road and got back into the forest again. The trail obviously was not frequently walked so sometimes we had to rely on the red marking to stay on it. The weather was a bit breezy and at some point near Vikos river, the trees were so dense that it was dark, humid and a bit cold. 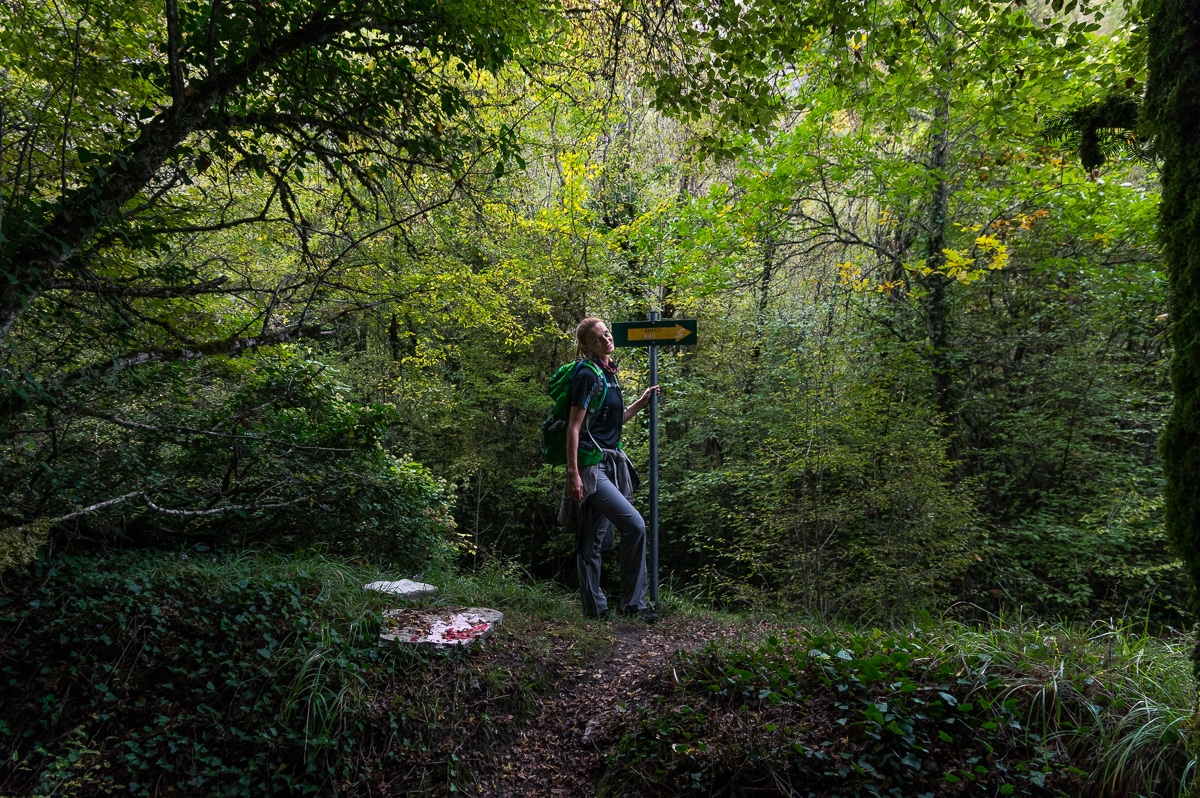 We reached the bridge of Lazaridis-Kontodimos an hour and ten minutes after we left Kapesovo. Kipi is no more than three minutes from there, built on a slope, in an amphitheatrical way.

Hotel Machalas was on the right, beneath the road level. A complex of small houses built around a beautiful garden. Our room was spacious with a small kitchen and of course a fireplace, classic Zagorisian architecture and a killing view outside the window. 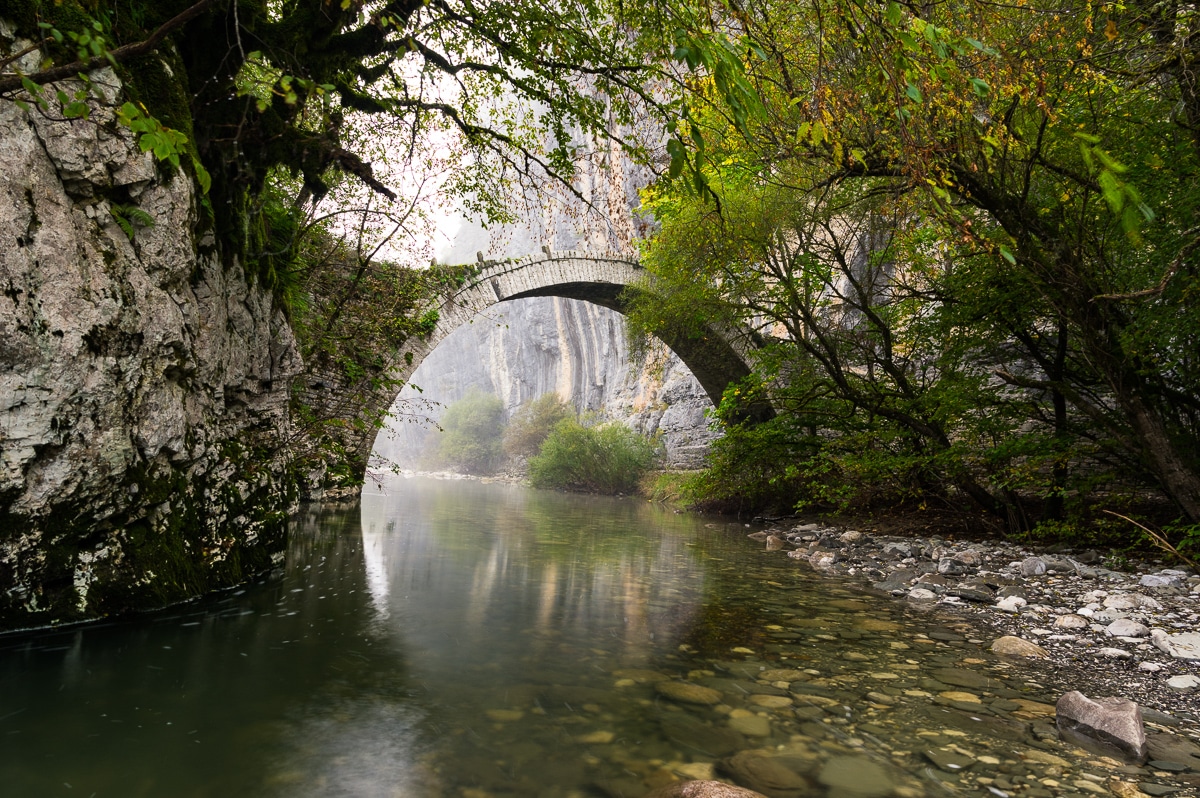 Our dinner included traditional cheese pie, boiled greens with olive oil and lemon, vegie soup and baked lamb with potatoes. Again everything was so fresh and delicious. I started to think that even with all this walking eventually I would put on weight…

Next Day : The Break 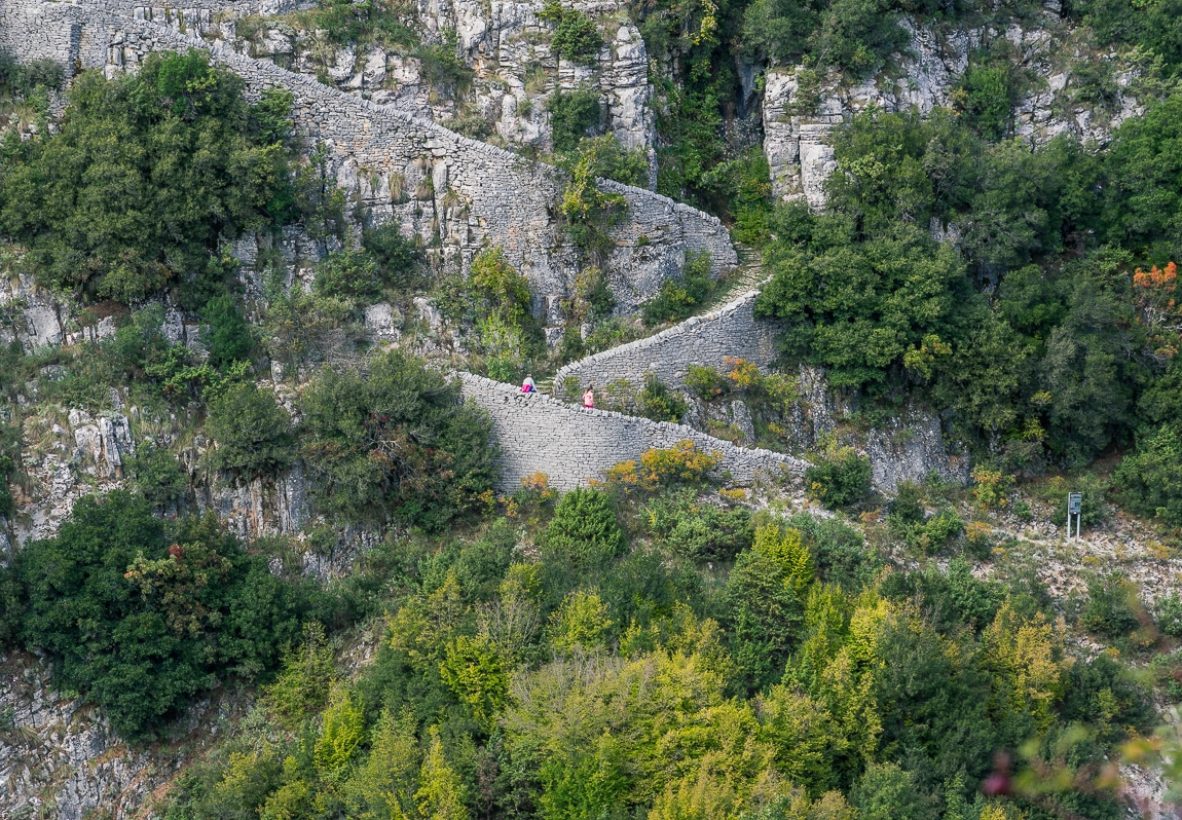 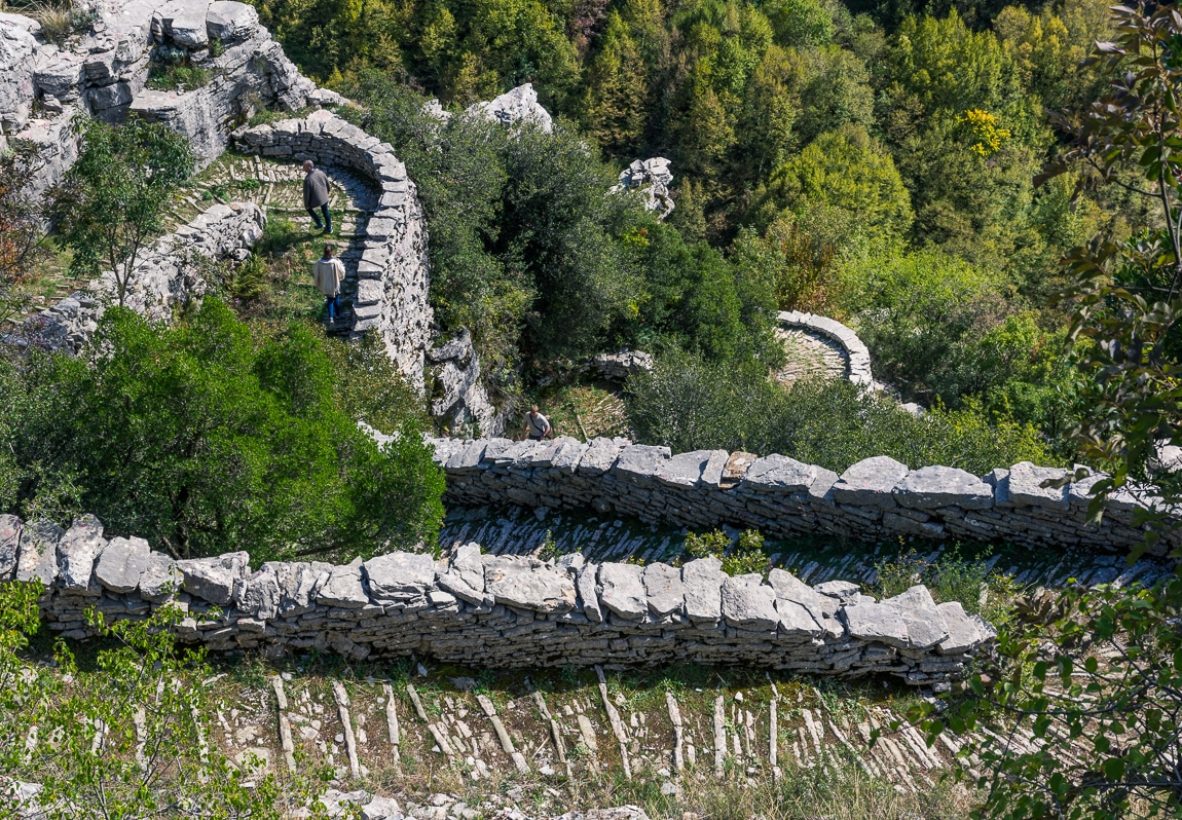 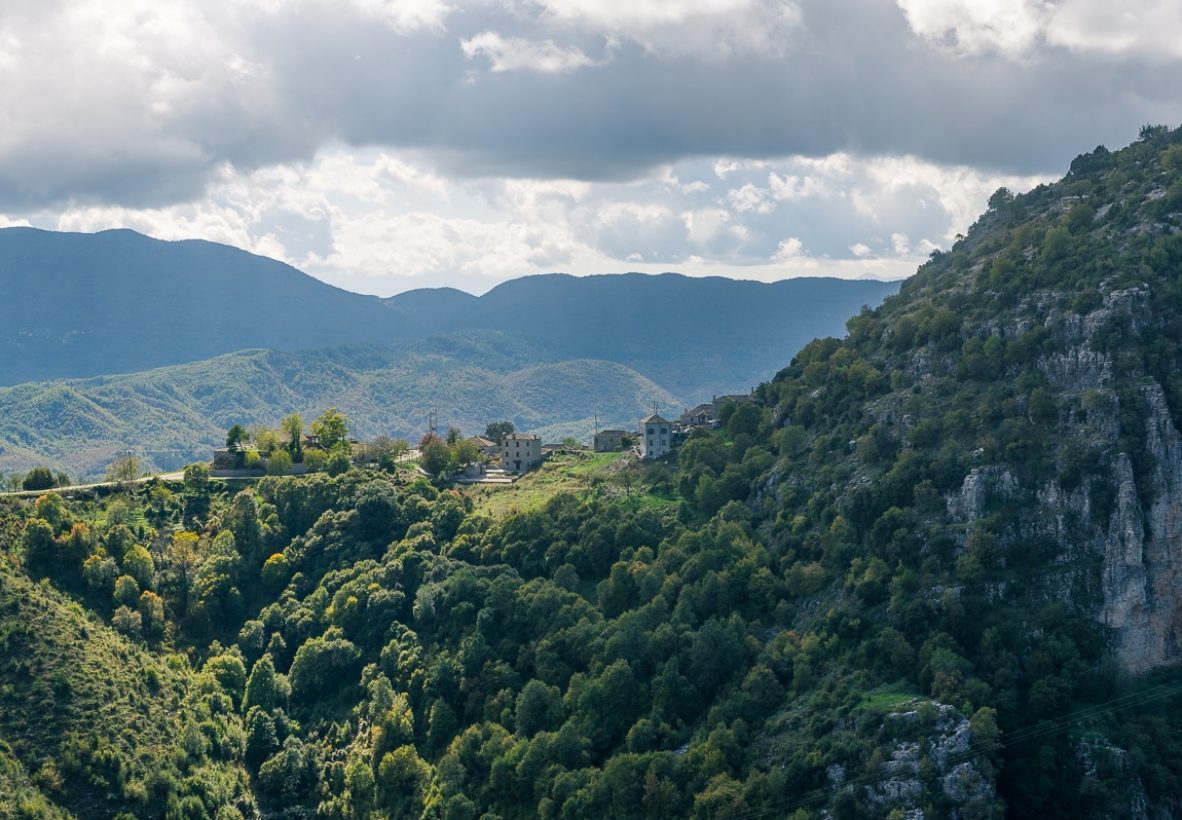 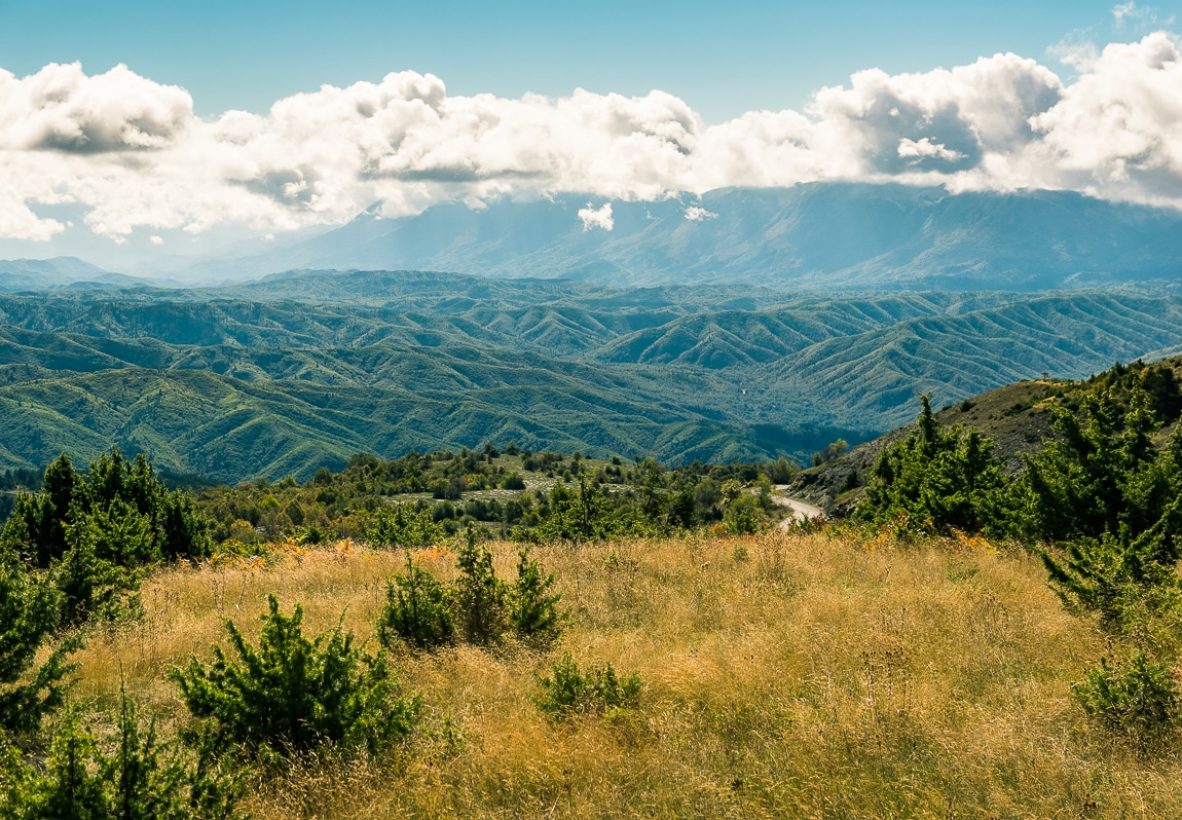 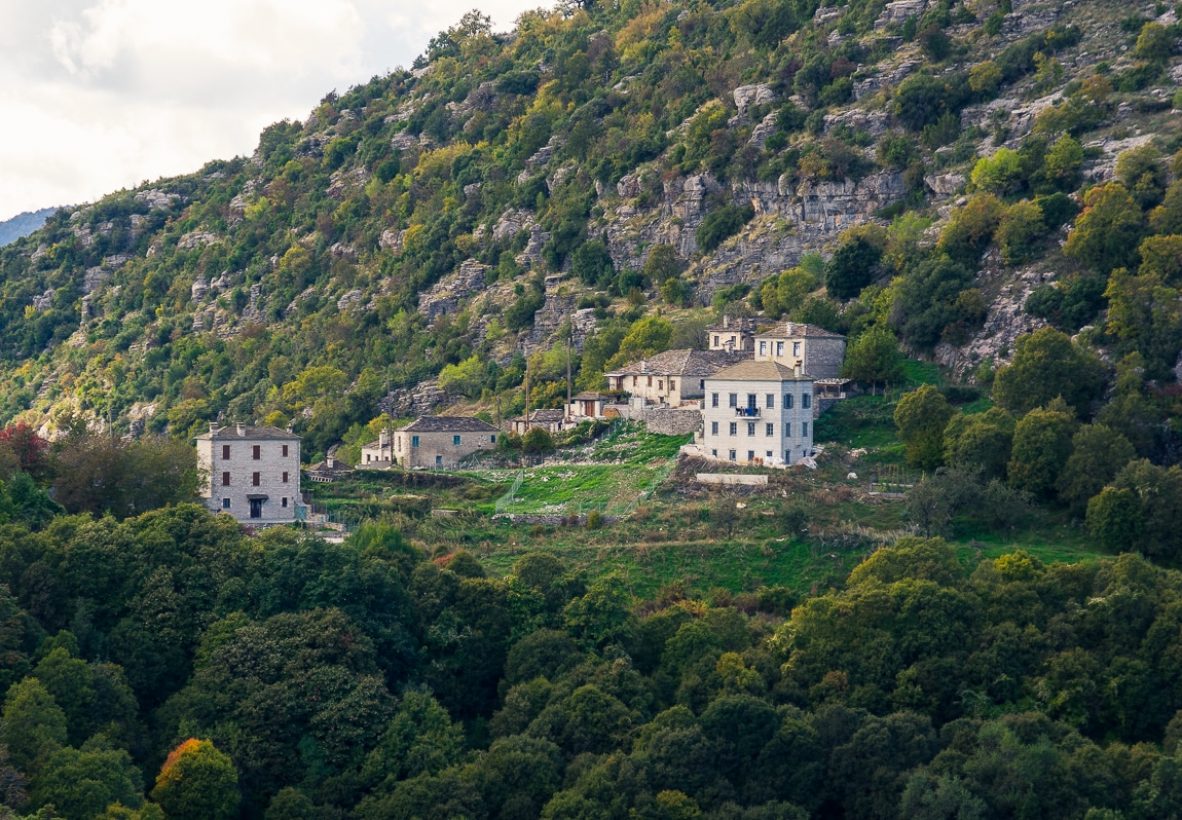 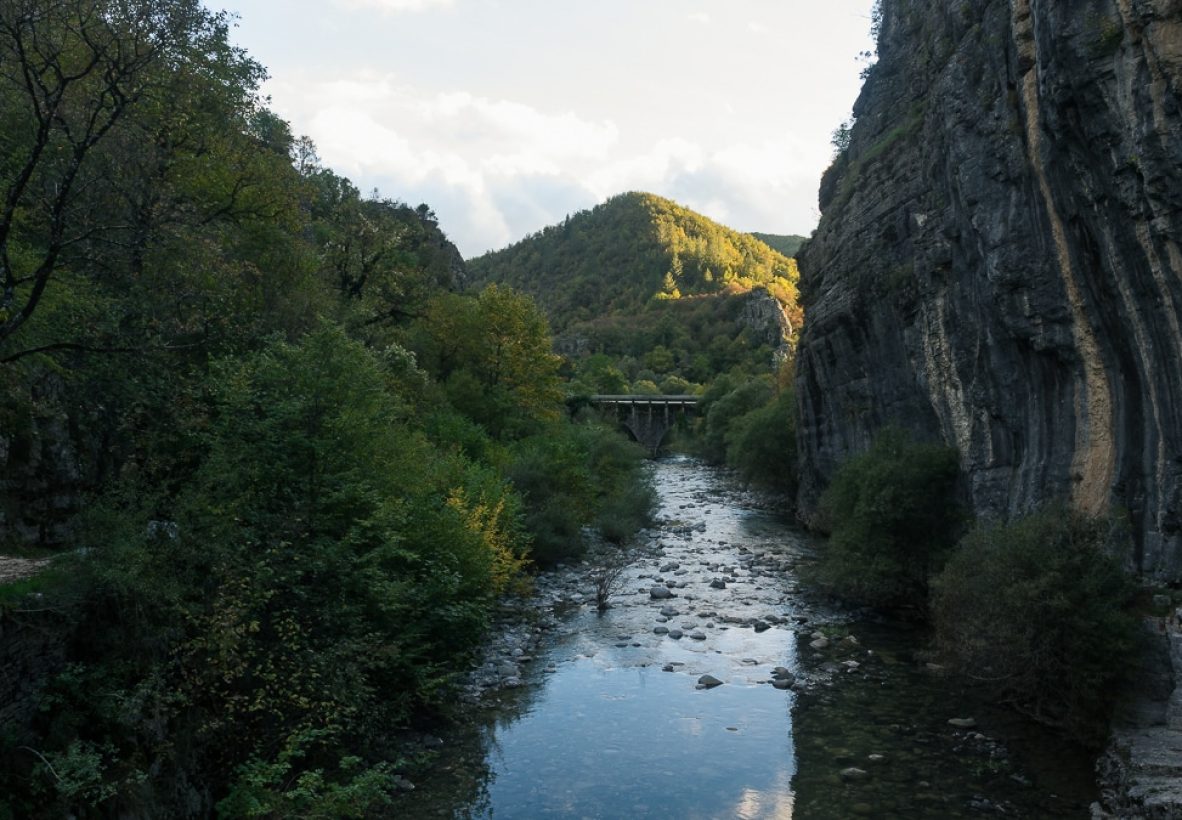 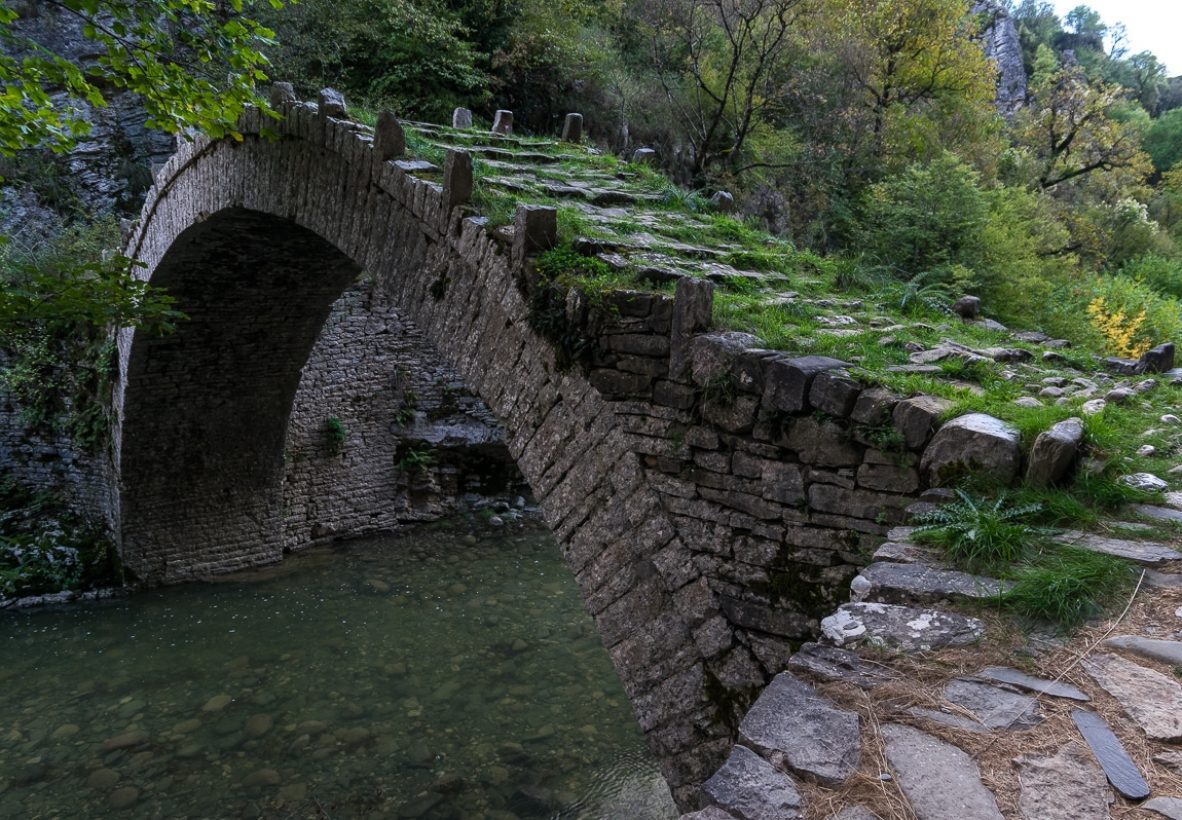 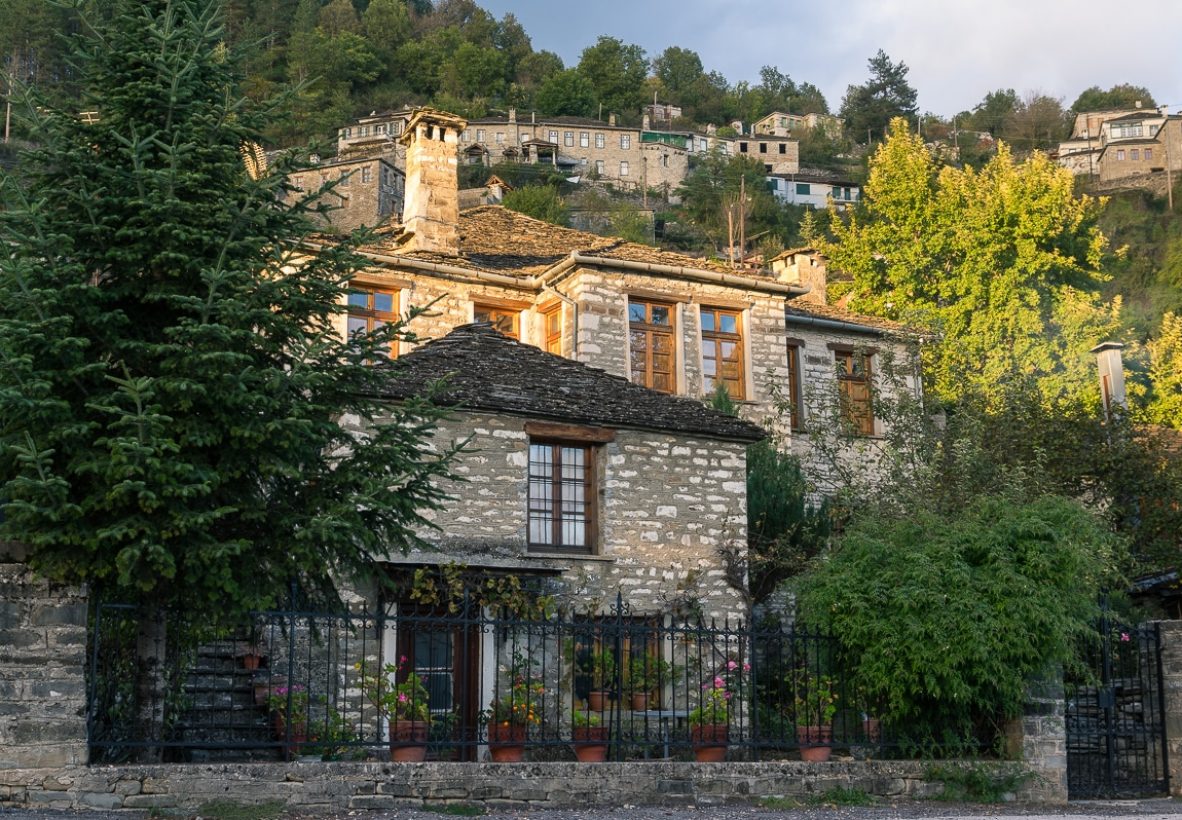 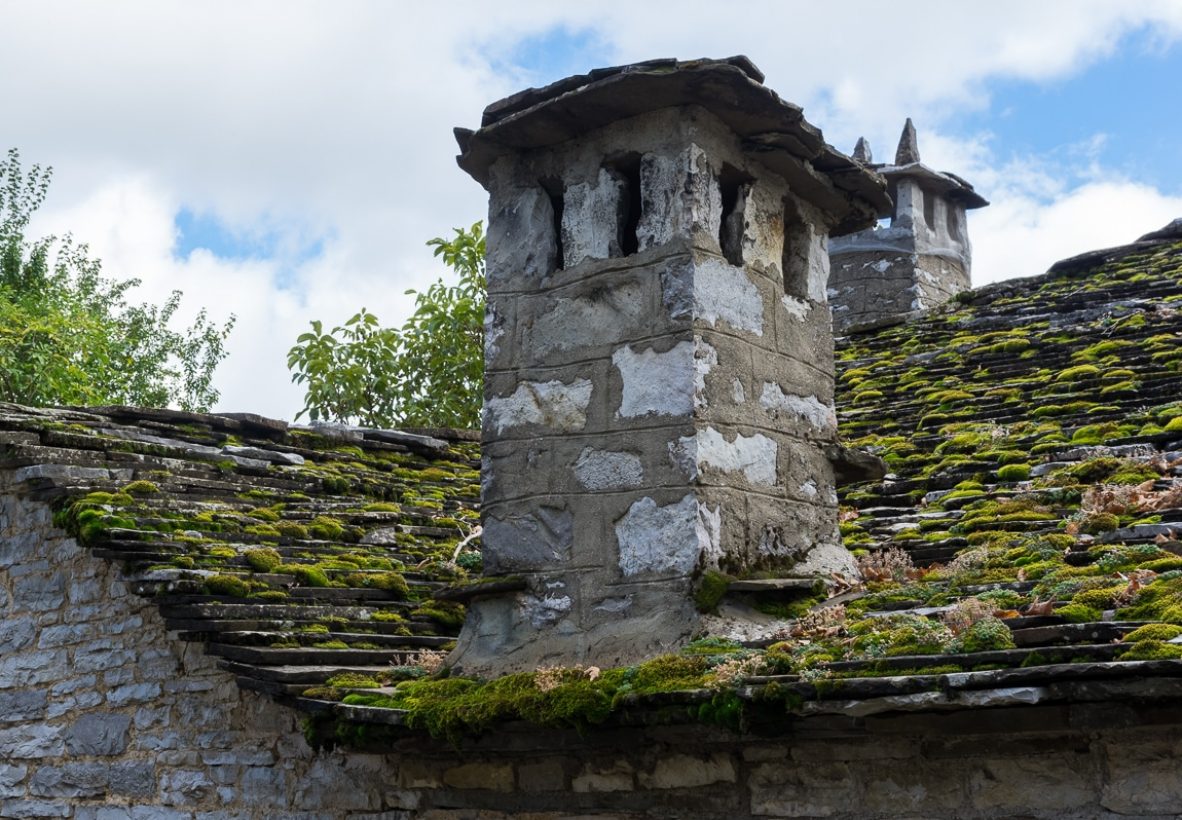 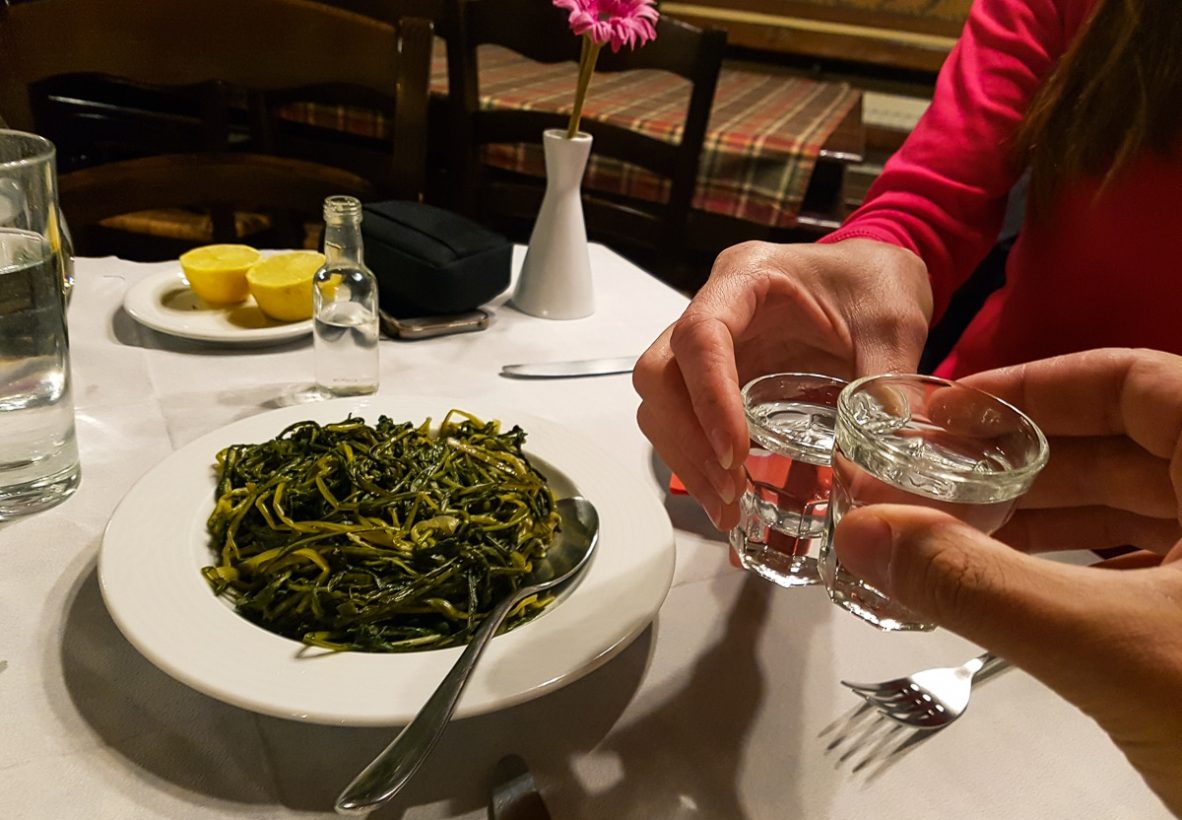 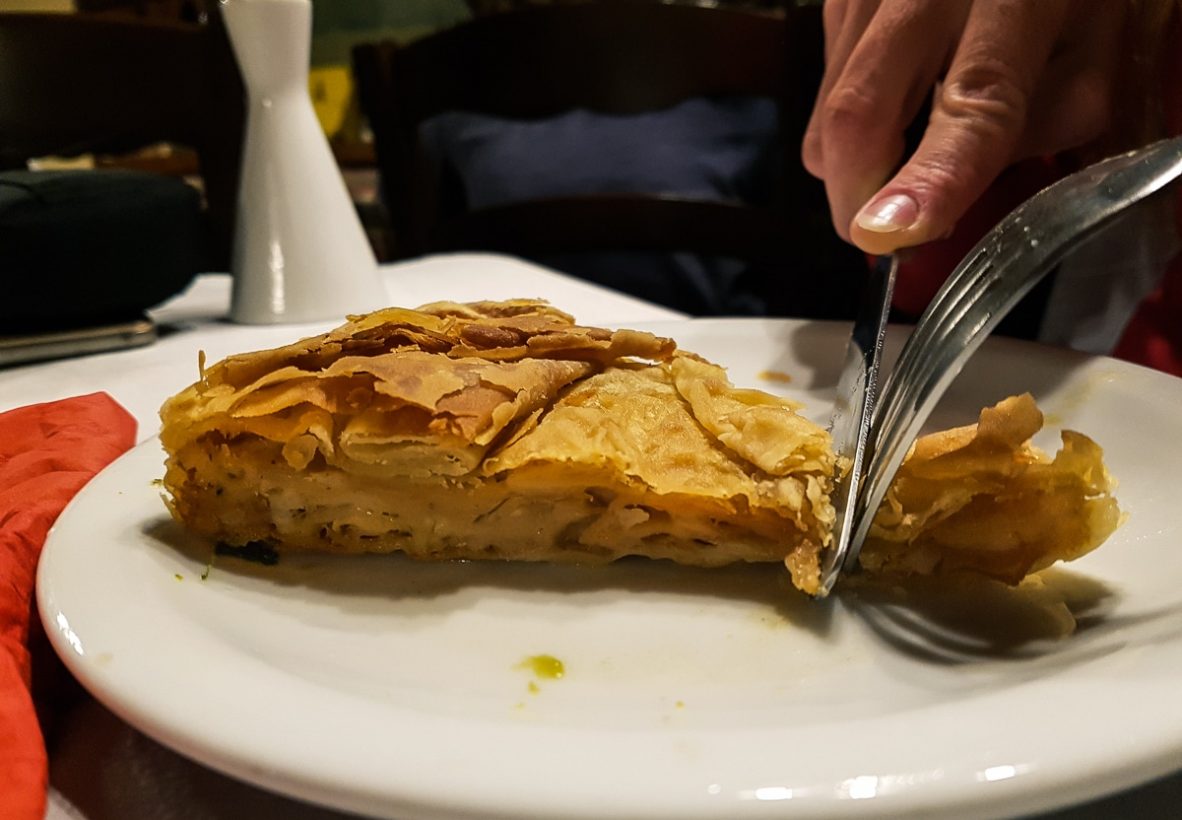