Sibiu is a picturesque medieval city located in the renowned Romanian region of Transylvania. The city’s historical center, which holds most of the interest, lies on the east bank of Cibin river and is divided into the pastel colored Lower town and the more strict and upper class, you guessed it, Upper town.

Hermannstadt—as Sibiu is called in German, was built by Saxons in the middle of 12th century and had already become a wealthy trading center by the 14th. Its craftsmen were organized in 19 guilds which played a decisive role in the city’s prosperity and cultural flourish. Something  expressed today through the city’s philharmonic orchestra, three theaters, and Sibiu’s international theatre festival among others. 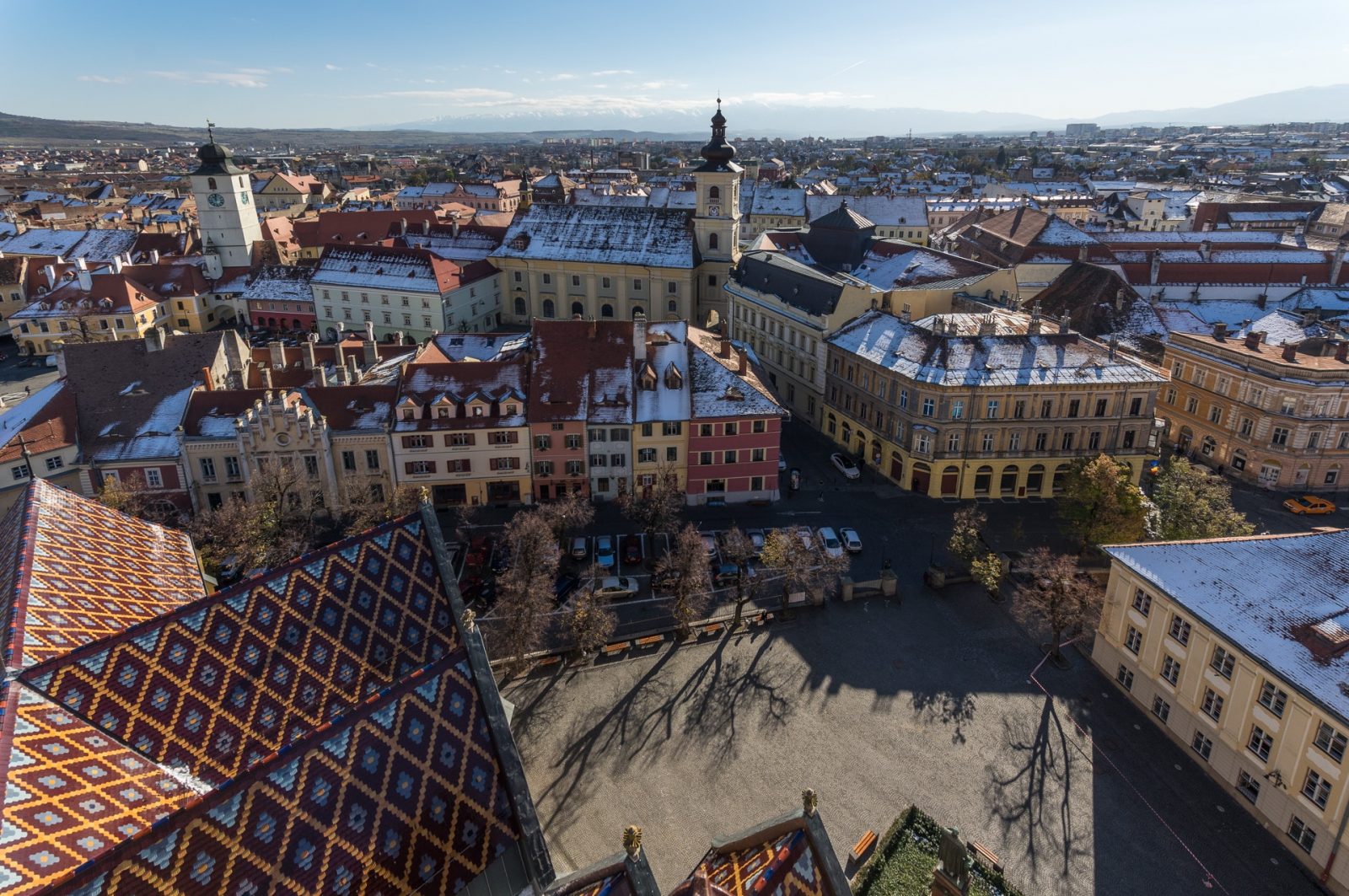 The scenic historical center is a strong candidate to enter UNESCO’s world heritage sites, something I believe will eventually happen. Sibiu’s historical character is preserved relatively untouched and that’s obvious from the moment you set foot in the old city. Modern interventions have been kept to a minimum, and fortunately, no sacrifices have been made in the name of touristic growth. I dare say that it sets an example for many cities around the world.

My cab passed under the Bridge of Lies and kept on for a few more meters only to pull up where the ascending street met the square. I paid the man, took my staff, and looked around for a bit while stretching and getting my bearings. Across the square, a row of colorful buildings gazed at me with their characteristic narrow roof-windows looking like the slit eyes of a monster peeking through its hideout — a distinctive element decorating many of Sibiu’s rooftops. They call it “Little Square” but it’s not that little after all.

My hotel was right next to the Bridge of Lies, one of Sibiu’s famous landmarks. Hotel Casa Luxembourg (review) would be my home for the next couple of days. A historical building colored peach and yellow with eloquent decorations around the windows. 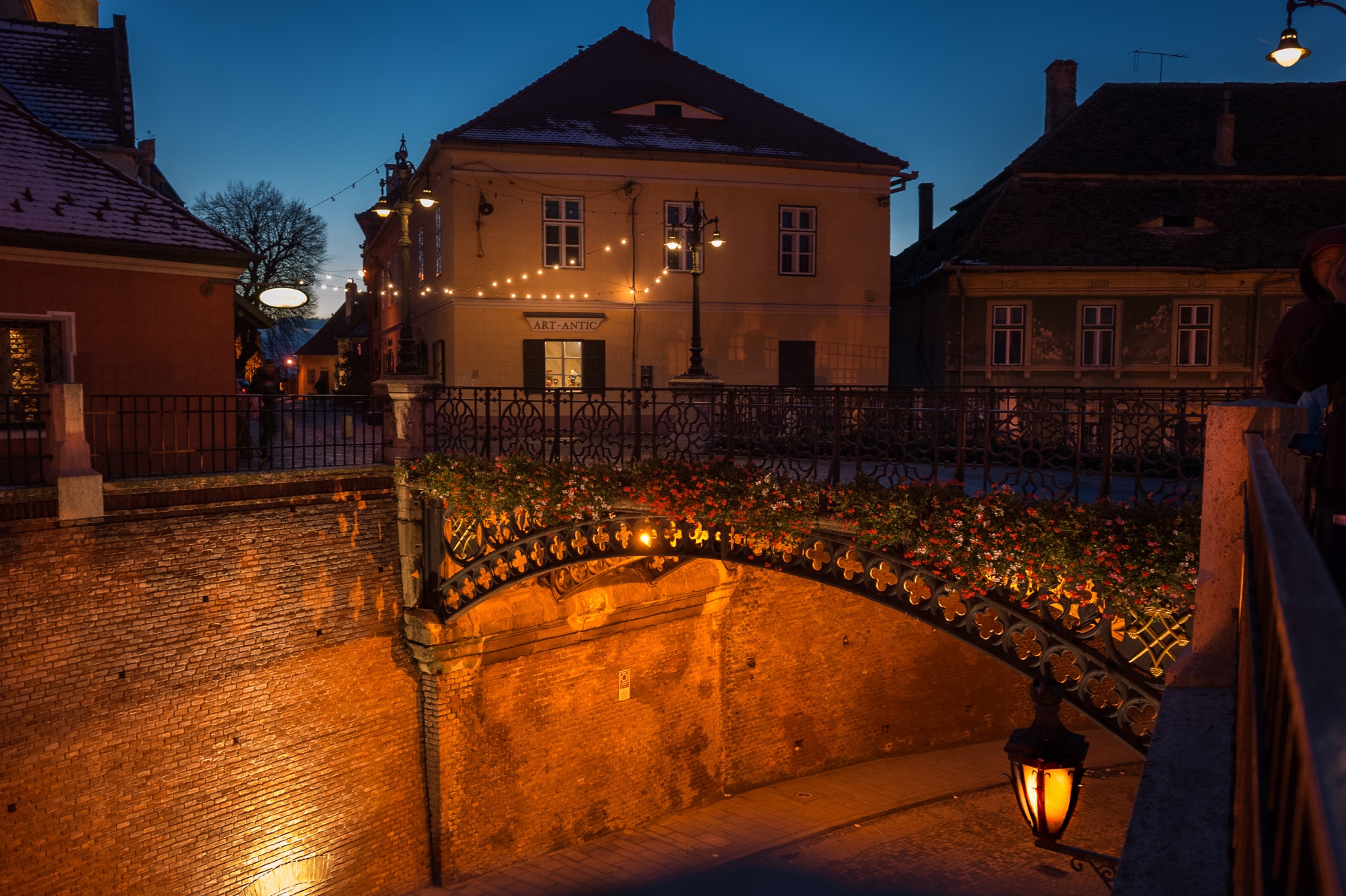 My first impression of the upper town was nostalgic. The buildings around Sibiu, induce this romantic mood you always get when visiting a medieval town. Pristine and untouched, it’s able to drag you into the illusion of a past era. I felt the same walking around Sighisoara—an equally gorgeous Romanian city.

The only thing breaking the strict line of rooftops around the square was the bell tower of Holy Trinity cathedral and the Council Tower, at the base of which two tunnels led to the north corner of Great square.

The sun gave the sky a vivid golden tone as it was about to set, and the last light was fading on the rectangular square by the time I got there. It was epic in proportions and as a spectacle. The most photogenic side—the northwest,  is occupied by the art-nouveau City Hall and the majestic Holy Trinity, the city’s iconic baroque-styled church. 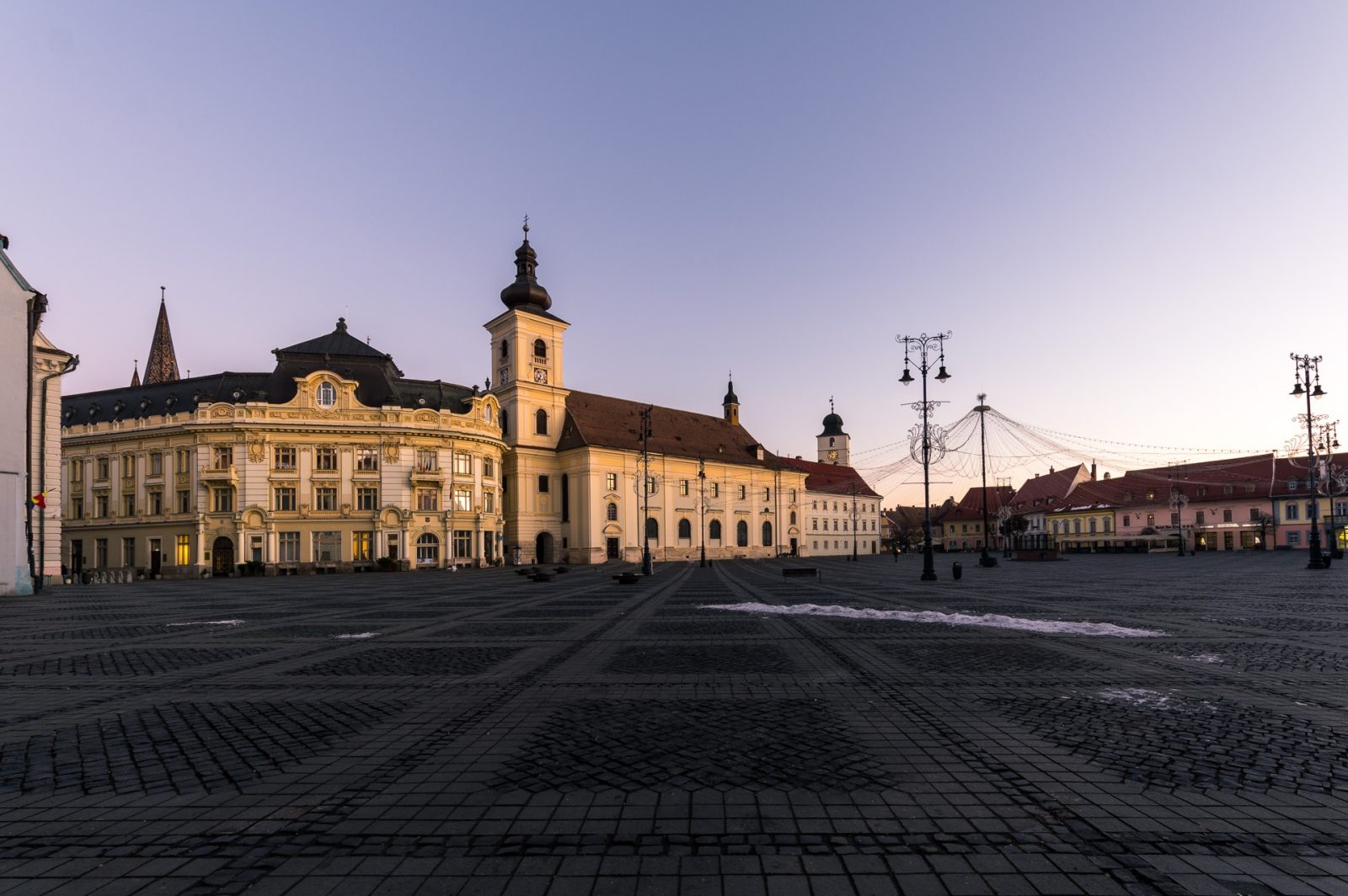 Just across the town hall is Brukenthal Palace—house of the Governor of Transylvania and Romania’s first museum. Today Brukenthal National Museum includes several different museums: the Pharmacy Museum, the museum of Hunting and the museums of History, Romanian art and, Contemporary art.

Behind the city hall, the Gothic Lutheran Cathedral—Sibiu’s most imposing building, features the highest tower in Transylvania. The unobstructed views to all directions make the stair climbing worthwhile and from the top, one can see the whole town and the church’s decorated rooftop which is covered with colorful tiles creating beautiful patterns. 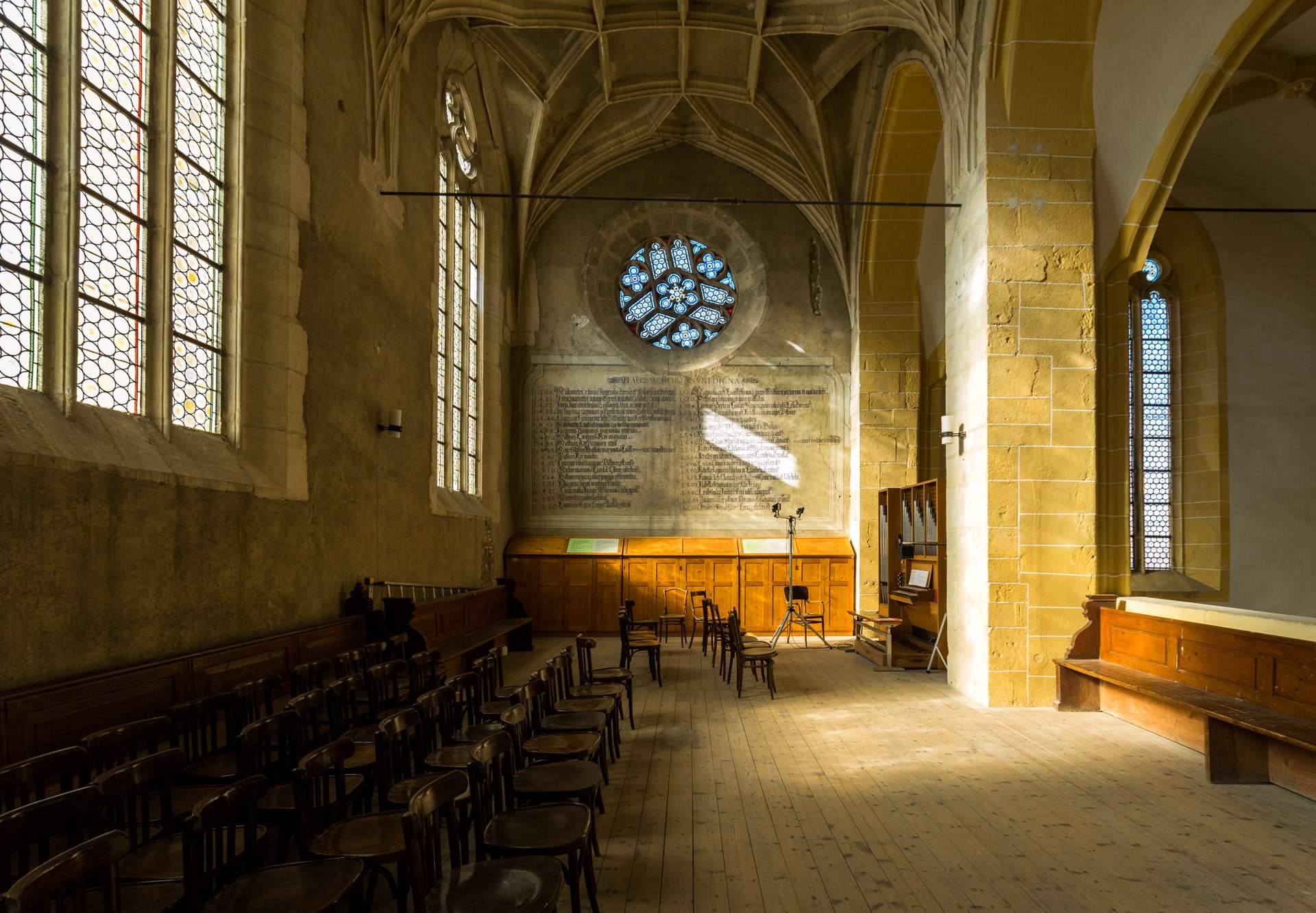 Like all historical cities, Sibiu is meant to be walked. The experience can never be full unless you stroll across the cute little shops and inside the shady narrow alleys with the colored walls and the high arched passages, which, many times, lead you to hidden little corners where more alleyways are waiting, to take you further into the city’s depths. Same goes for the Lower part of the city even though it has lots of cars.

A thing I joyfully discovered during my wanderings is that the city’s food scene is of a very high level, with some restaurants providing brilliant dishes that look and taste heavenly. Monsieur Joben right on the Great square being my favorite. As for coffee and alcohol, the numerous little cafes and bars around the two squares and their side roads, can keep you from getting bored for many days. The prices, are friendly everywhere, like in most places in Romania.

When roaming a big city, you always take care not to get lost. It’s something constantly lurking in the back of your mind. In little places like this though, you want to get lost. You want your mind to go blank as the time passes by and you get deeper and deeper into a sweet exploring bliss. Isn’t this the pure essence of traveling after all? To forget yourself and clean your mind’s whiteboard, making space for new places, experiences and people?

Talking about writing, Sibiu would be an ideal writing getaway. It’s small, inspiring and relative quiet.  I actually did write a bit in my extravagant hotel room. Watching the Little square and the Bridge of Lies outside my window had a novelistic aura to it. There are many legends on how Romania‘s first iron forged bridge got its name. The most prevalent being that it will collapse if someone on top of it says a lie, and the most romantic (not) that it took its name from the short-lived promises of love that couples make on it. 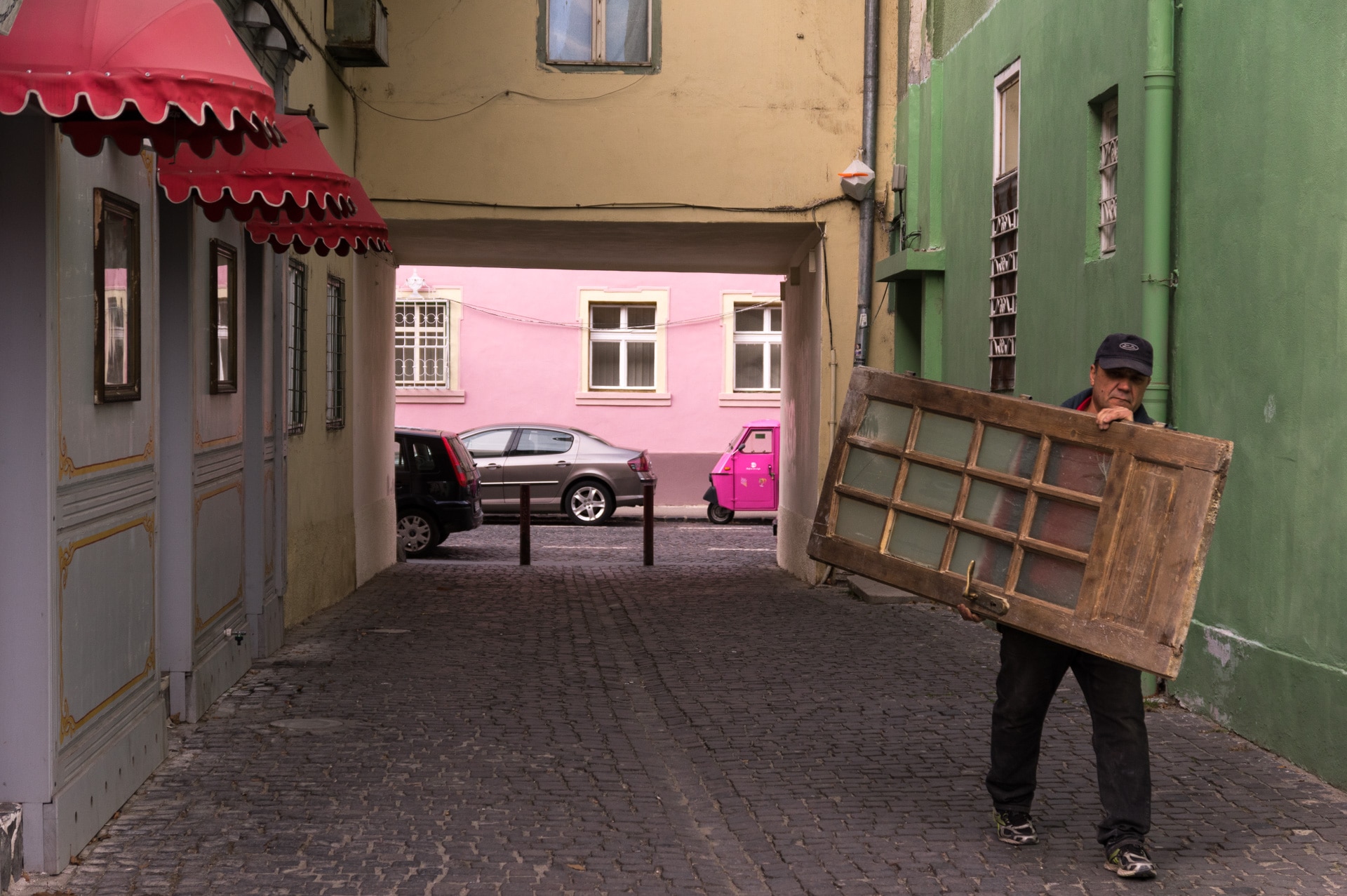 Besides summer, during which various events and festivals take place around the city, the most special time to visit Sibiu is during Christmas when the city puts its party clothes on and millions of lights create a very warm atmosphere raising its coziness to new levels.

This is exactly why Sibiu is special and differs from other cities. It manages to create a bond with the traveler. It’s not faceless, it is welcoming and approachable. It has got a soul that it’s easy to distinguish and experience, and for this, it will always be one of my favorite destinations in Romania.