I was eager to see Bucharest for the first time but on the same time I wasn’t sure what to expect. Romania is not entirely in Balkans, nor is completely a central European country. Historically it was part of the Eastern Bloc but after a certain point it kept its distance from Moscow.

All these differences kind of reflect to the Romanian capital, making it look a bit erratic. Bucharest is great no doubt but it takes some effort in order to get to know it. It’s a small riddle, you have to work your way to its core, and when you do, it will reward you. 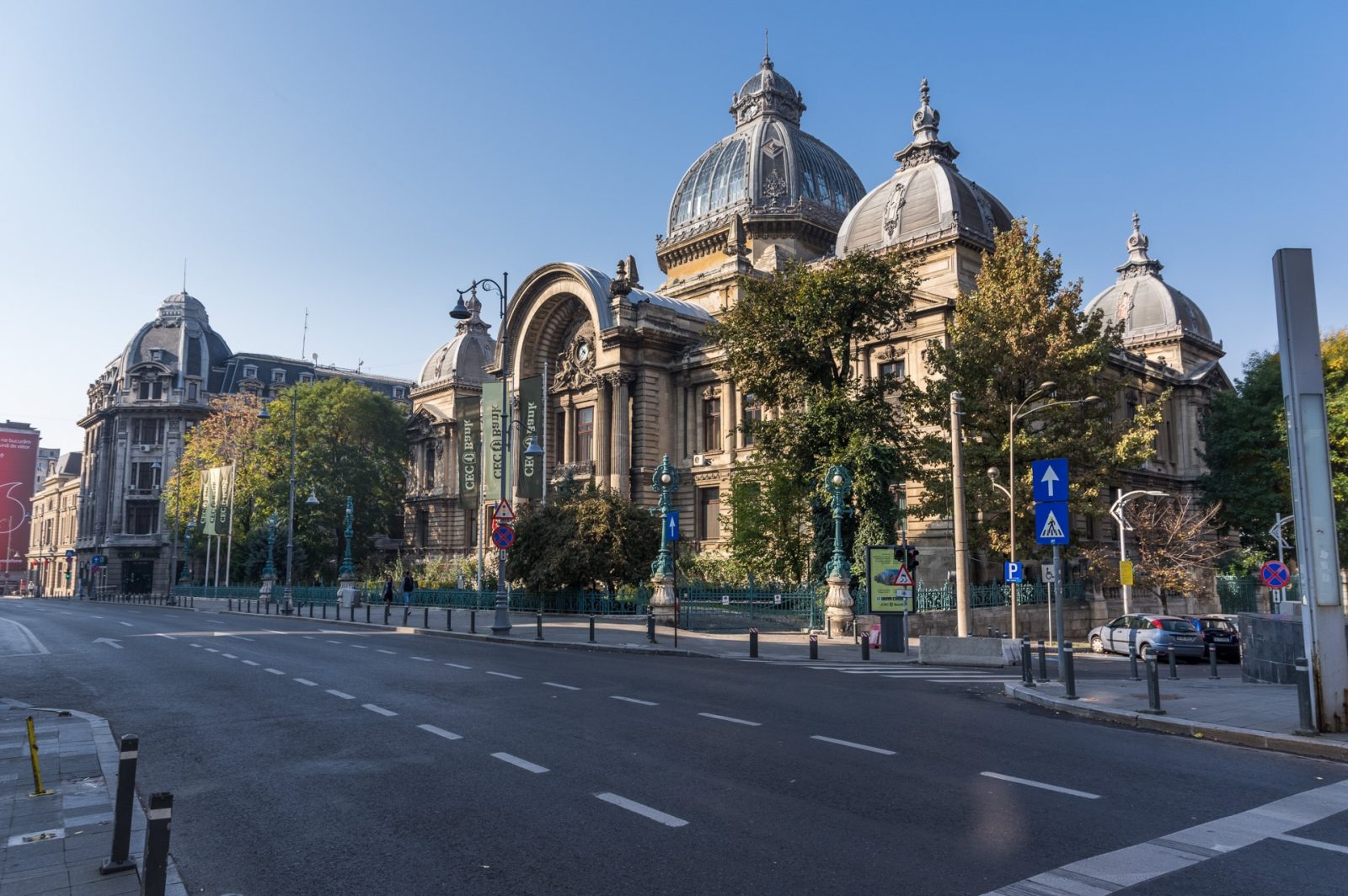 In the City of Bucharest

I arrived on the early flight from Budapest, and while it was comfortable and relative quick, I was still dizzy after my five-hour drive from north Slovakia all the way to the Hungarian capital through thick mist and pitch dark country roads.

Bucharest was already on its feet as the small shuttle bus was traversing the motorway to the city amidst the warm October morning.

We went around the Arch of Triumph (smaller but similar in design to the Parisian one) heading to Victory square and immediately to Victory avenue—one of the city’s oldest roads— towards the city and the parliament.

My hotel was between the parliament and the old town—probably two of the biggest points of interest in Bucharest. Since the weather was lovely, I decided to drop my bags and walk the busy route to the old city center.

First, I crossed the green and buzzing with people Izvor park. Young couples were walking up and down, kids were cycling and dancing on the grass and seniors were just relaxing on the benches while watching all the others.

As soon as I walked out of the park, the only thing that separated me and the old city was Dambovida river, on the banks of which the Bucharest initially got built. It’s not very wide and its calm waters flowed rather peacefully under the small bridge. I made some shots of nearby buildings which caught my eye the way they projected their clear reflections on the water and before I knew it, I was walking the streets of the old town. 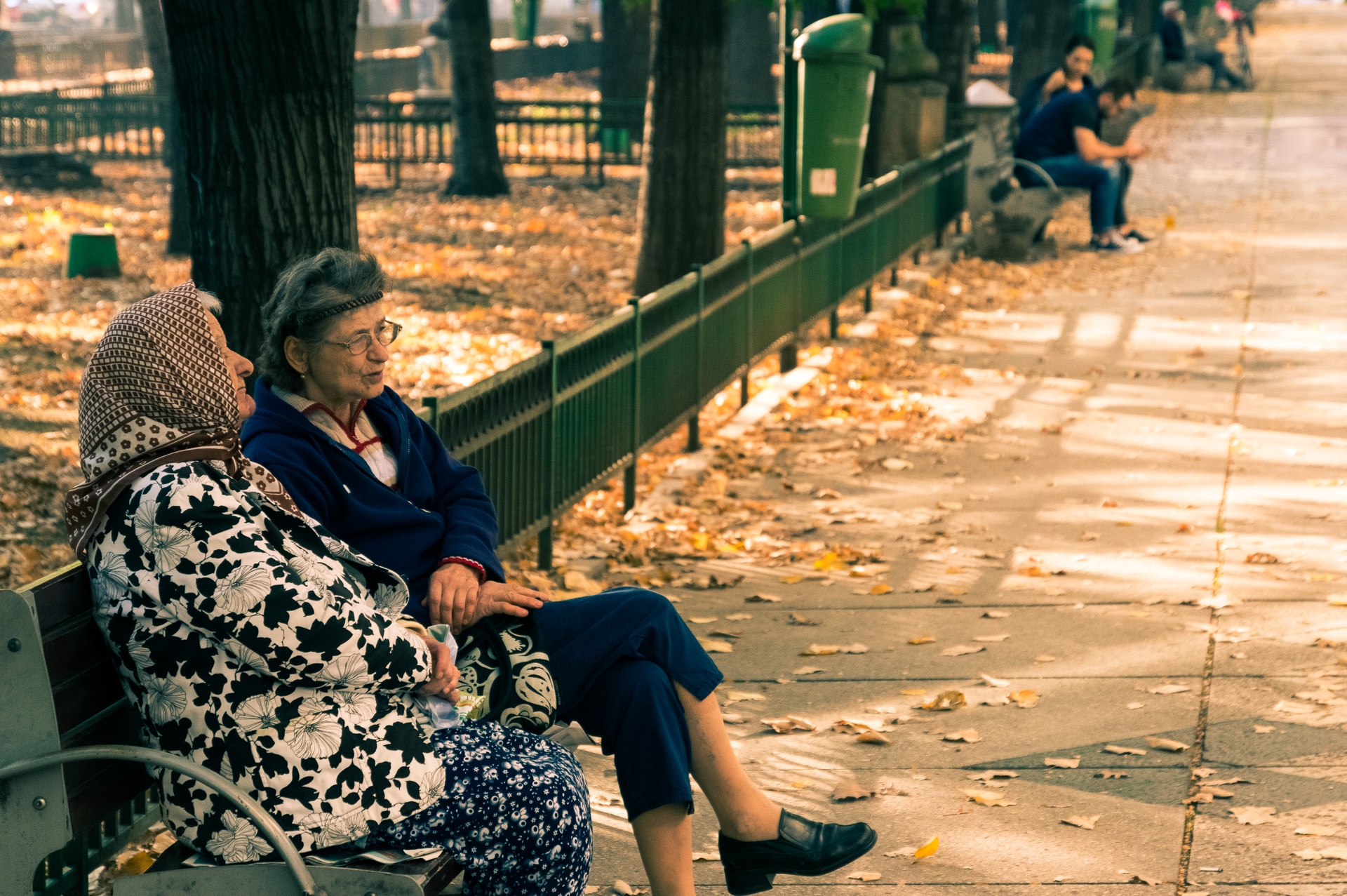 This part of Bucharest has been through a lot in the course of centuries. Several disasters and the country’s last dicator (Cheausesku) have taken their toll but even so, the old town is still radiant and waits to be explored. Its busy alleys are paved with stone, though the granite has been removed from some roads and has been sold for profit sometime in the past. The bustling sidewalks are full of small cafes where people sit and relax while sipping a usually good cup of coffee and watching the passers-by.

I picked one to sit, on Stavropoleos street just opposite the magnificent Palace of Deposits and Consignments and next to the equally spectacular National Museum of Romanian History. Both of them are on the aforementioned Victory Avenue where many other buildings from Belle Époque era are built. Further down the narrow street is Stavropoleos monastery with its small church. Even though is dwarfed by the nearby buildings, it still manages to stand out with its beautiful frescoes on the inside and the outside. The small building next to it houses among others a library with the most extensive byzantine music book collection in Romania.

Walking further down the road I turned left at the end of the triangular Palatul Pinacotecii and walked along the National Bank and its museum. These French neoclassical buildings have distinctive rooftops, decorated with copper plates which look like they are ablaze when they mirror the late afternoon sun. The Pura Vida sky bar across the street is great if you want to chill with a drink while watching the sun setting behind those two spectacular buildings. 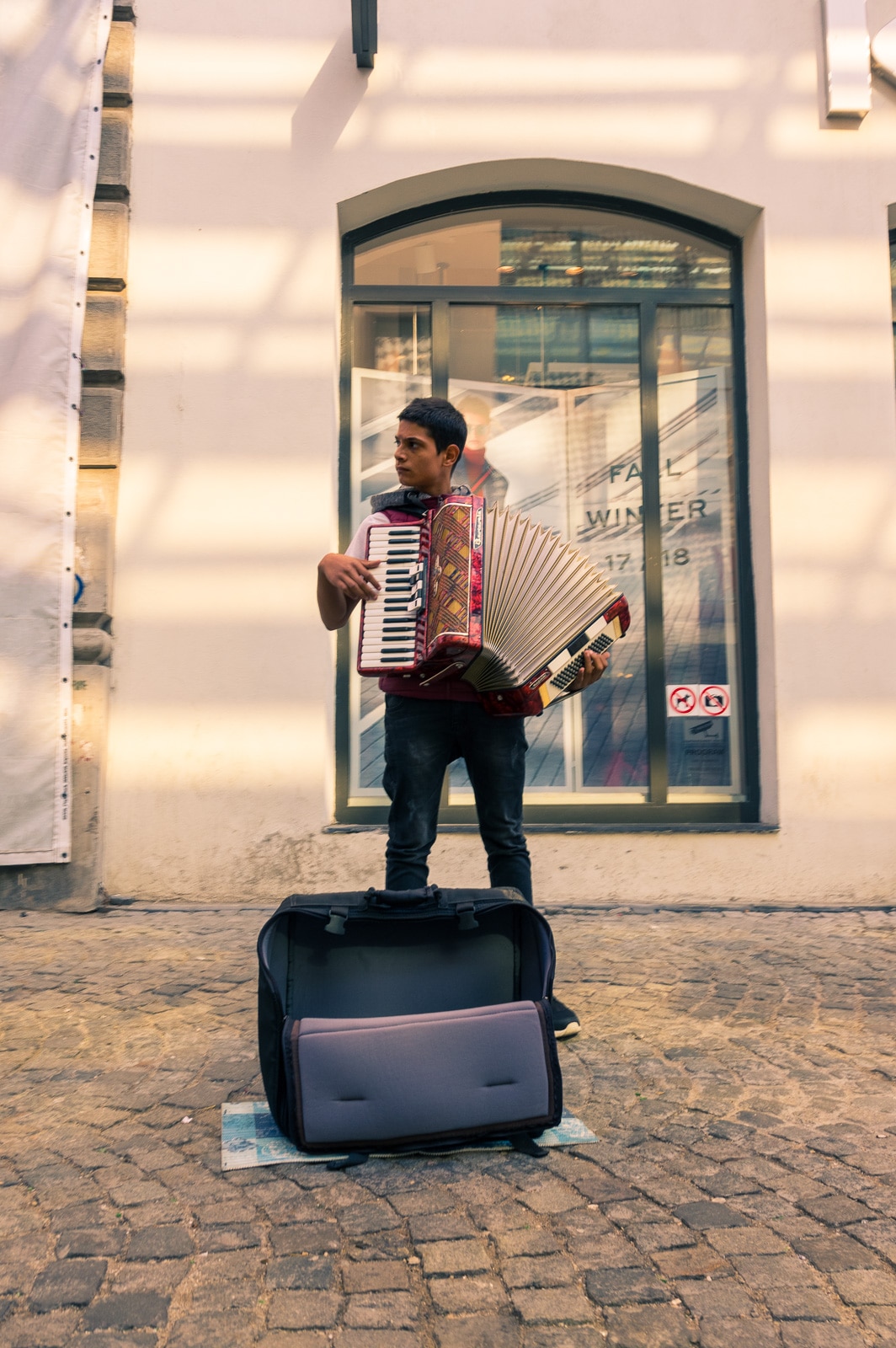 Other sites of interest around the area are the ruins of Gurtea Veche—the old court which Vlad Tepes (the prince of Wallachia whose brutality inspired Bram Stoker’s Dracula and was later tied to vampire myths) had built in the 15th century. The dungeons underneath were used to detain Vlad’s prisoners.

For people who are looking for a quick bite, grabbing a pastry from one of the small shops on Regina Elisabeta Boulevard and eating it on University square is a nice alternative to a full lunch.

Victory Avenue with its beautiful belle epoque buildings and eloquent street lamps is one side of the city. The other is the numerous heavy communist structures made of cement. However no matter how monotonous a building can be, nothing comes near to the monstrosity known as the palace of parliament. 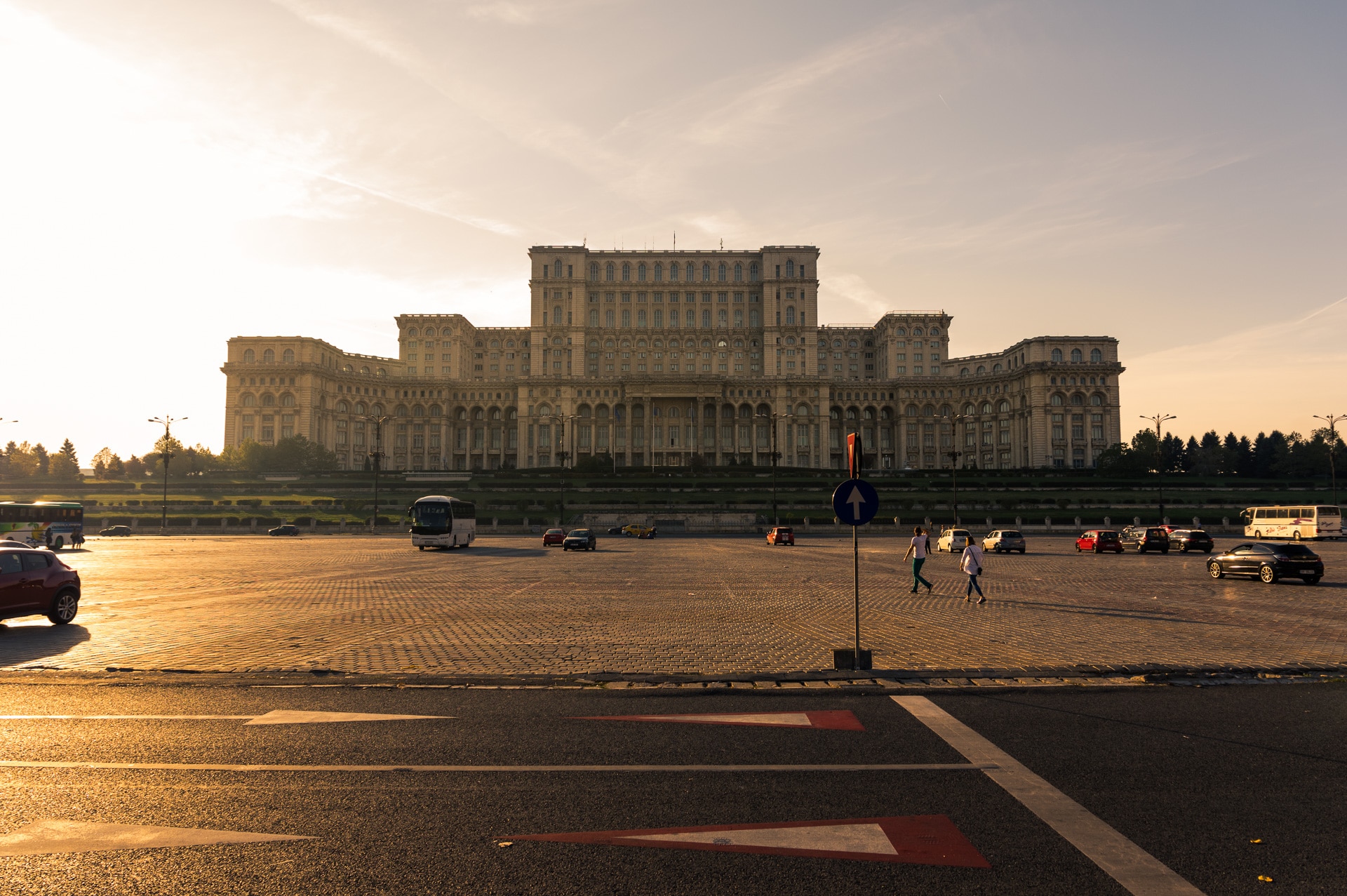 This structure is so vulgar that it ends up being interesting. Looking at it from the front, brought only excessive adjectives to my mind: monstrous, colossal, gigantic. The 2nd biggest administrative building in the world—second only to the pentagon, has 1100 rooms of which only 400 are entirely finished and many less are actually being used.

It was the fantasy of Romania’s modern dictator Nikolae Cheausesku whose rather disturbed mind thought that it would reflect his “grandeur”. Naturally he also thought that the bigger the reflection, the greater he would look.

Once known as Casa Poporului which ironically means the people’s house, the only relation this structure has with people is that 40.000 of them had to be relocated in order to make enough space for it to be raised. Their houses were demolished and of course no one was ever asked.

The only buildings that got spared were some churches and a few other buildings which were literally lifted from their foundations and rolled to a new location by the brilliant engineer Eugeniu Iordăchescu who devised a pioneering method to move buildings on rails, sometimes for several hundred meters.

Working accidents were frequent and eventually it cost the Romanian people the outrageous amount of 3 billion Euro (3.4 in $) in today’s money.

Today except for the parliament, it houses the Museums of Contemporary Art, Communist Totalitarianism and one devoted to the Palace itself.

Fact :
The three presenters of BBC’s famous show “Top Gear”, raced three supercars on the roads of the building’s huge underground levels, for a special episode about Romania.

Bucharest has been a rising force in Europe for the past years and there is a very good reason for that. The city’s special character have the potential to satisfy most of the travelers no matter what they are looking in the Romanian capital. History, culture, nightlife, culinary scene—this city has it all. If you add to the equation the great prices and the numerous airplane connections then I really think that it’s a great destination. 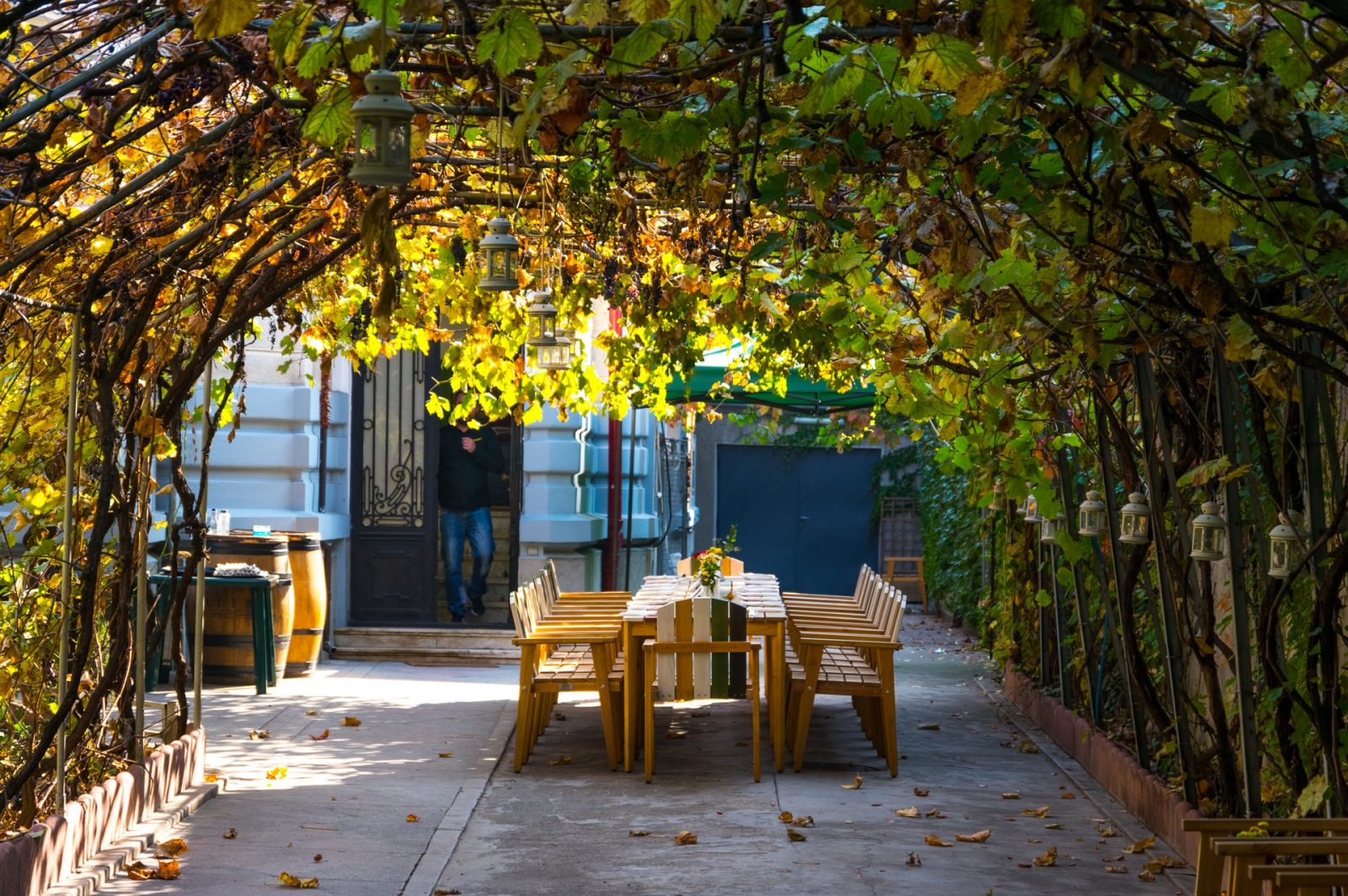 Where to Eat
Gastronomika : A great restaurant far from the crowded tourist center housed in a beautiful mansion with a great garden where you can sit and have your lunch or dinner under the vines. Tasty fusion cuisine with meat and fish.

Nightlife
After sunset the city gets live while many of Bucharest’s rooftops lighten up. Small and bigger spaces become the perfect spots for a late afternoon drink with the moon above your head and the city at your feet. There is a place for every taste and especially downtown where except the usual touristic pubs you can find great spots where locals go. Pura Vida and Nomad sky bars are two excellent choices to start with. 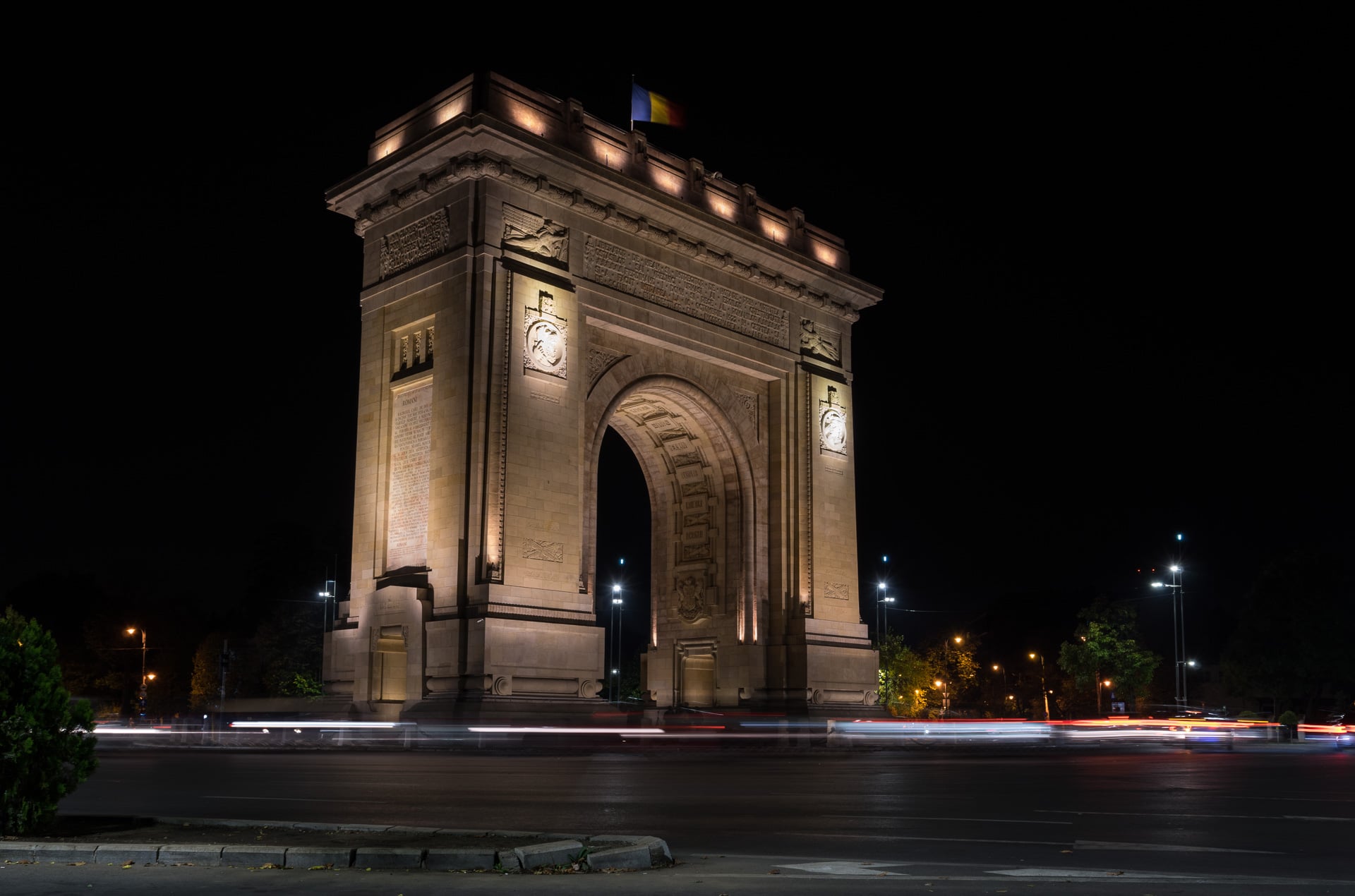