If a distillation came out of Ireland — its pure essence concentrated in a single place, that would be Dunquin.
The next parish to America, as they used to call it, is the westernmost village of the Irish mainland, right on the tip of Dingle peninsula where the prolific green of the meadows is abruptly cut by the deep blue of the Atlantic Ocean. Dunquin (Dún Chaoin in Gaelic) is built on the foot of Mount Eagle, overlooking this eternal battle between earth and water.

A few miles off the coast, the abandoned Blasket islands endure the passage of time with stoicism, like their inhabitants had done for centuries before the last of them crossed the sound once and for all in 1953. The Great Blasket has produced some of Ireland’s famous writers and storytellers like Peig Sayers, Maurice O’Sullivan and Thomas O’Crohan. Not a bad crop for a settlement that never had more than two hundred people, and a testament as to how a place can shape a person instead of the other way around. When life on the island declined and the last inhabitants moved to the mainland, the small village on the north east side of the Great Blasket was left deserted, and the houses, whose stone walls had provided shelter to the islanders for years, were left to become earth again.

Storytelling has a special place in Irish tradition. It was what people did during the long cold nights when they gathered around a turf fire and exchanged legends and stories about everyday life. Living around Dunquin may not be as harsh as it used to, but it still has a seductive slowness so obvious to an outsider like me. The village is only ten miles away from Dingle—a small fishing town of two thousand, but feels more like a hundred… 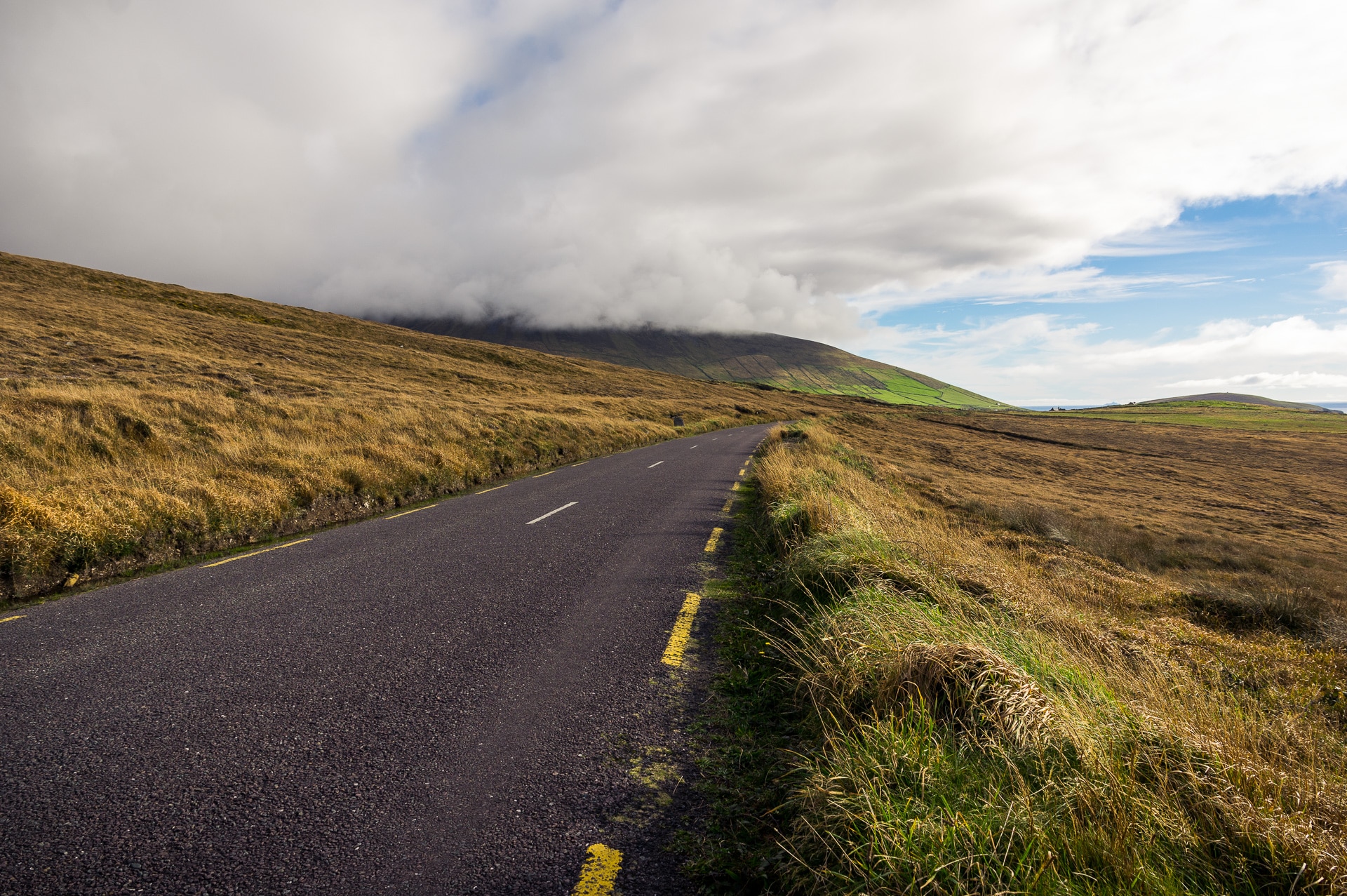 The Slea Head Drive is one of the most beautiful roads in Ireland. It starts and ends in Dingle and it’s an amazing way to explore the coast of the peninsula.

When we arrived, it was already ten o’clock in the night. We hadn’t encountered a single soul after Dingle. The single lane country road was so narrow near Dunquin that there were short recesses on the fields here and there in case two cars met. Not a frequent problem apparently. The village was dark and in order to locate our Airbnb I had to call the host for coordinates, otherwise we would have spent an hour searching. The cottage was small but as delightful as it looked in the pictures. The night was moonless so we would have to wait the following day in order to admire the ocean. 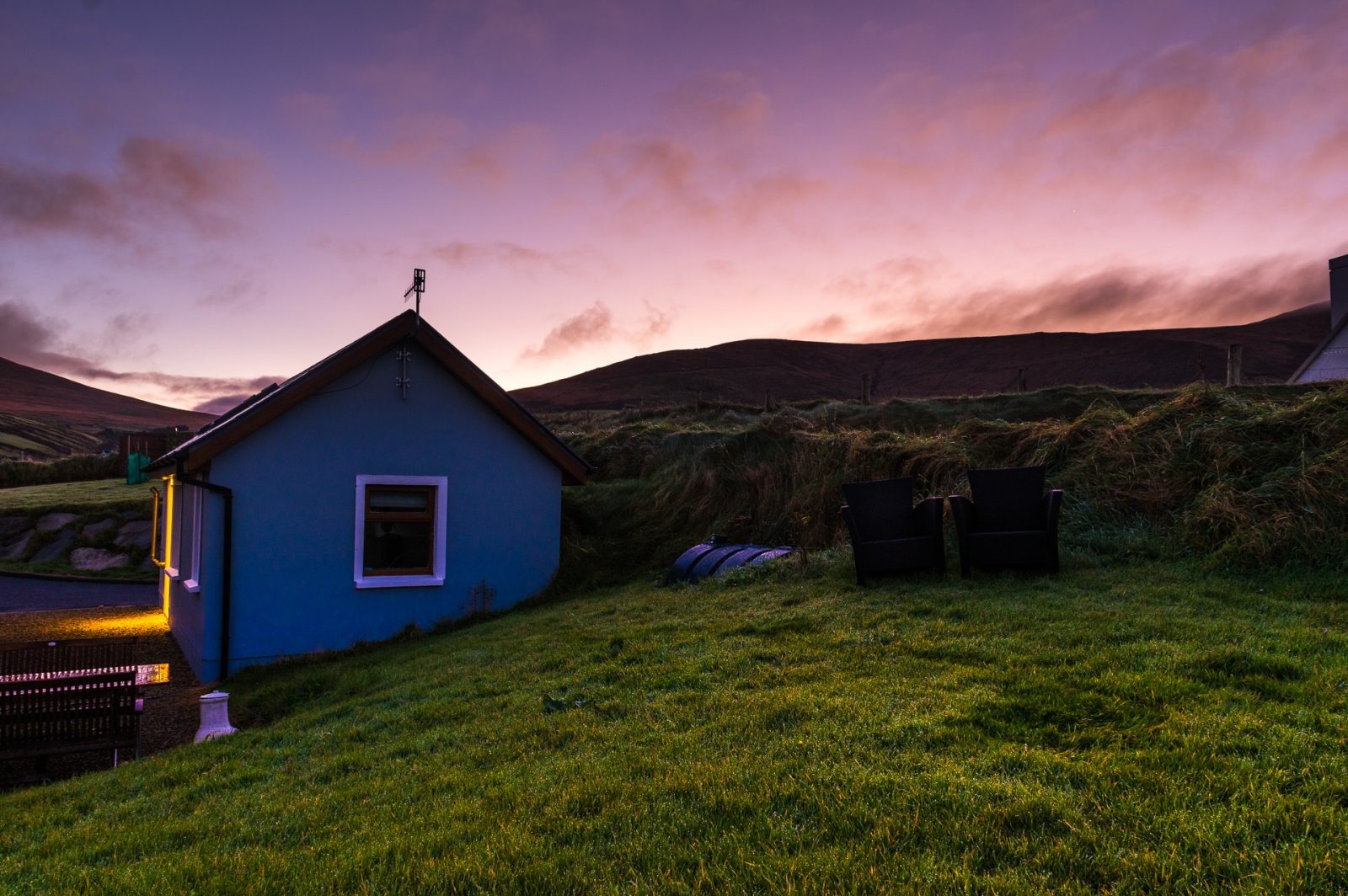 Next morning, I woke up while it was still dark, I took my camera and walked out. It was chilly but there was no wind except for a small breeze picking up from time to time. The light rustle of the grass leaves broke the silent. It didn’t take long for the blue hour to come and cast its light on the horizon revealing the outline of the Great Blasket island. Teraght with its pointy silhouette was just behind it and next to it the “sleeping giant” or “dead man”—as Inishtooskert island is called, lived up to its name, resembling a human being as convincingly as a piece of land could ever have.
I got a few shots trying to combine the landscape with the seascape just behind it, but it didn’t really work as I had hoped for, mostly because of the neighbor’s yard that was in the way. Well, photography is like fishing, most of the times you come back empty handed. I took in the scenery a for bit more and went back to bed. 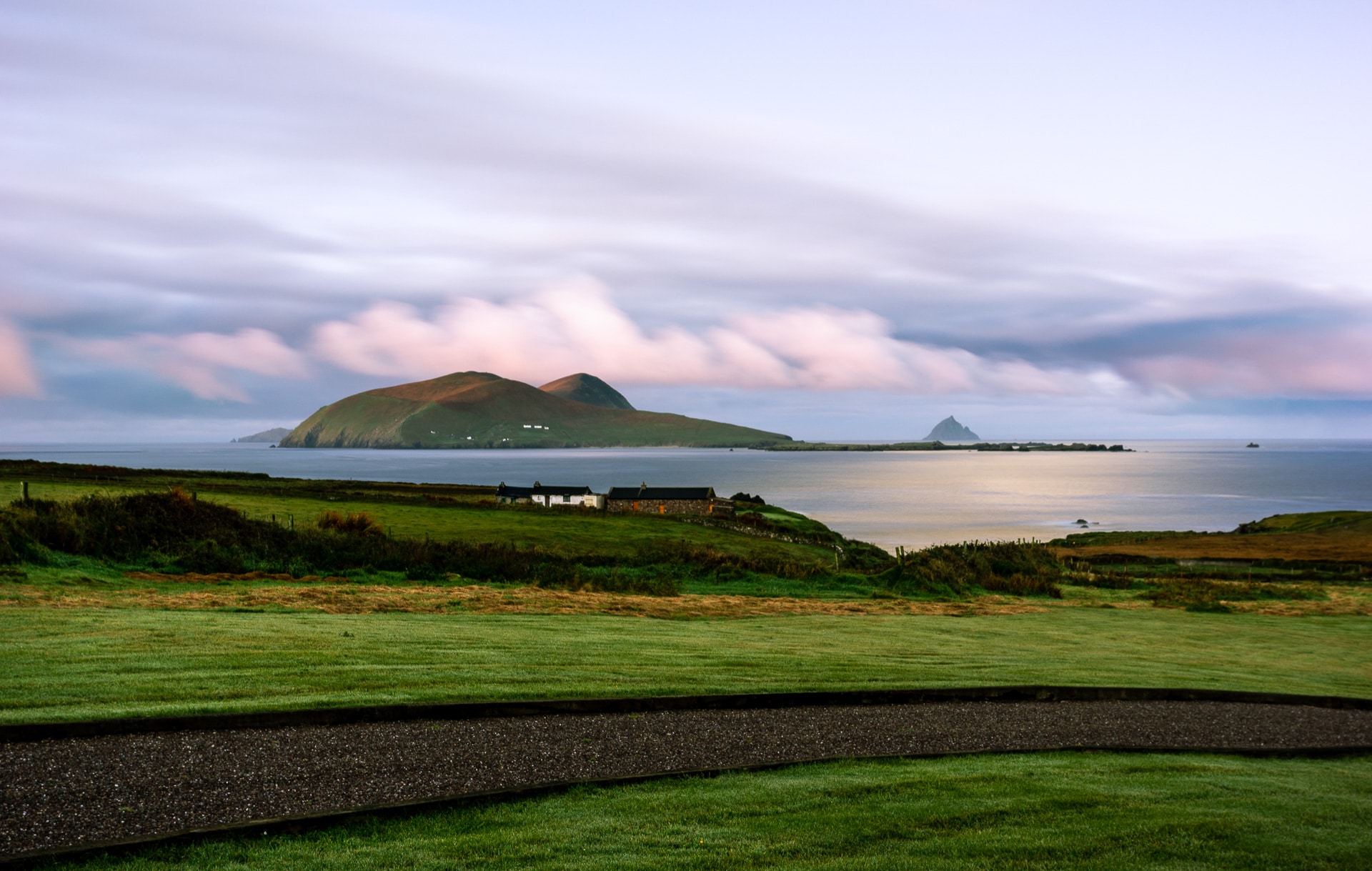 
We had hoped to take the eco tour around the isles and perhaps spend a night at the Great Blasket, but we were a day late for the former and the unpredictable weather had made the latter a risky choice, because we could get stuck there for several days. Not a bad prospect, but there was just not enough time. Too bad since I was hoping to watch the bird colonies on the islands and maybe some whales and dolphins. We would spent more time in Dunquin instead, not a bad trade-off.

The harbor seemed like a good starting point. While walking through the village’s green pastures with the small houses and the ocean in the background, I admired the way that this old community had been built in harmony with nature. There was nobody around around save for a few sheep and cattle, usually contained by stone walls. Irish sheep are always marked by the owner’s colors, something that makes them look like modern art in a rural themed canvas. 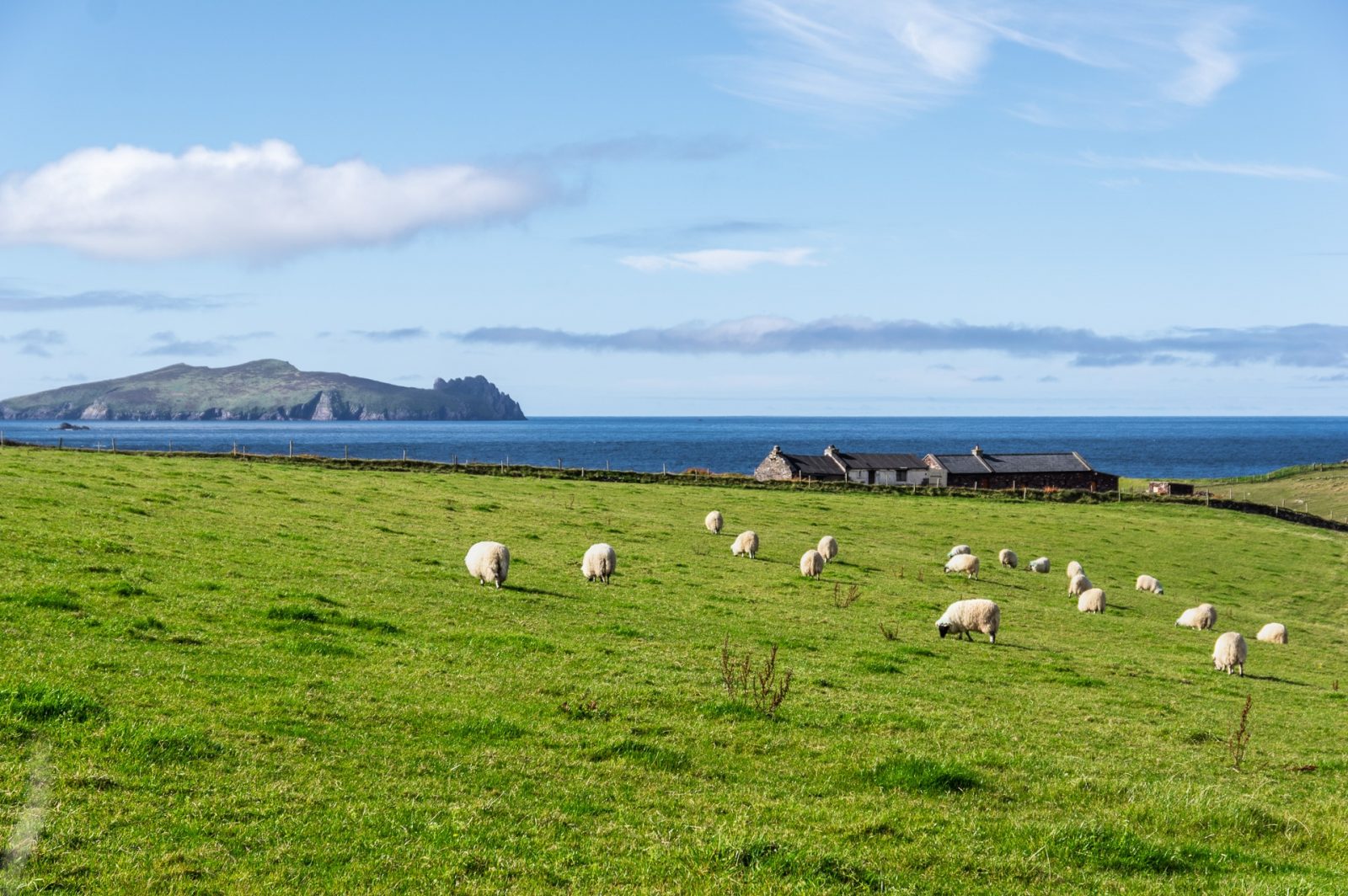 The old harbor is two minutes outside the village, at the bottom of a steep and well protected cliff bay. A narrow concrete sheep way spirals down the small pier which was, and still is, the place where boats leave for Blasket Islands. All supplies had to go through this little harbor in order to—weather permitted—reach the islanders. A few times a year, flocks of sheep are still being transferred to and from the islands, flooding the sheep way and creating an impressive spectacle.
Miraculously, that morning, there was no wind and the ocean was as calm as a millpond. A young man greeted us on his way up from the dock. People were working on the pier, dismantling a curragh to store it for the winter. Curraghs are traditional boats found in Ireland and Scotland. They have a wooden frame which nowadays is covered with canvas and resin as opposed to the animal skins and tar used in the past. Even stripped down, it looked pretty heavy and these people had to exercise great strength and endurance in order to carry it up the steep hill. The dock was surrounded by sheer cliffs, and was protected by two pyramid-shaped rocks protruding out of the water in the middle of the small bay. 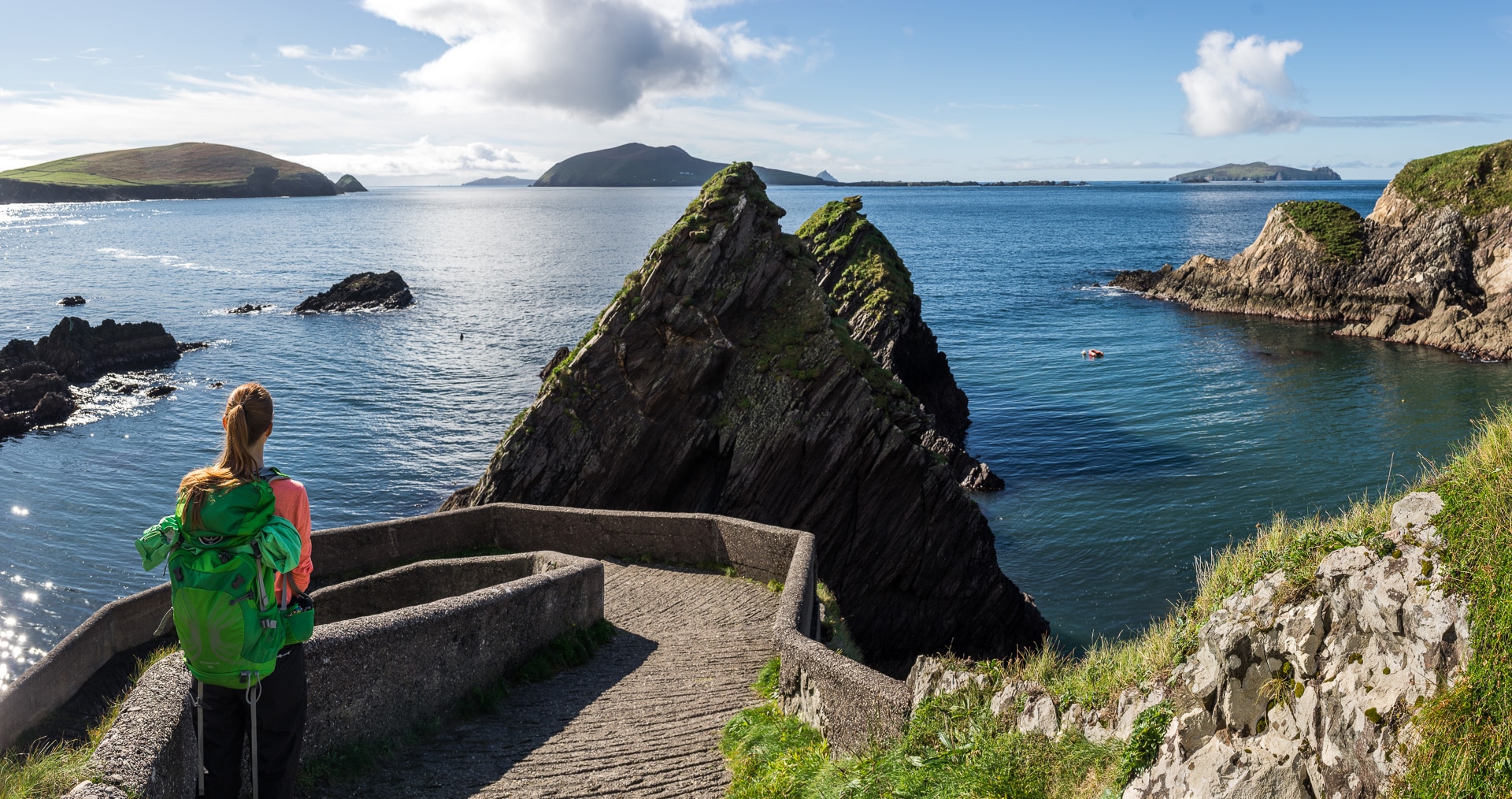 Next, we took the coastal trail heading north. It’s a very scenic route with some great viewpoints offering great views, sometimes to the left towards the sea and the “sleeping giant” and other times to the right where Dunquin and Mt. Eagle are. The trail is flat and rather easy to walk. At some points there were steady ladders helping us to go over fences and stone walls that were in the way. 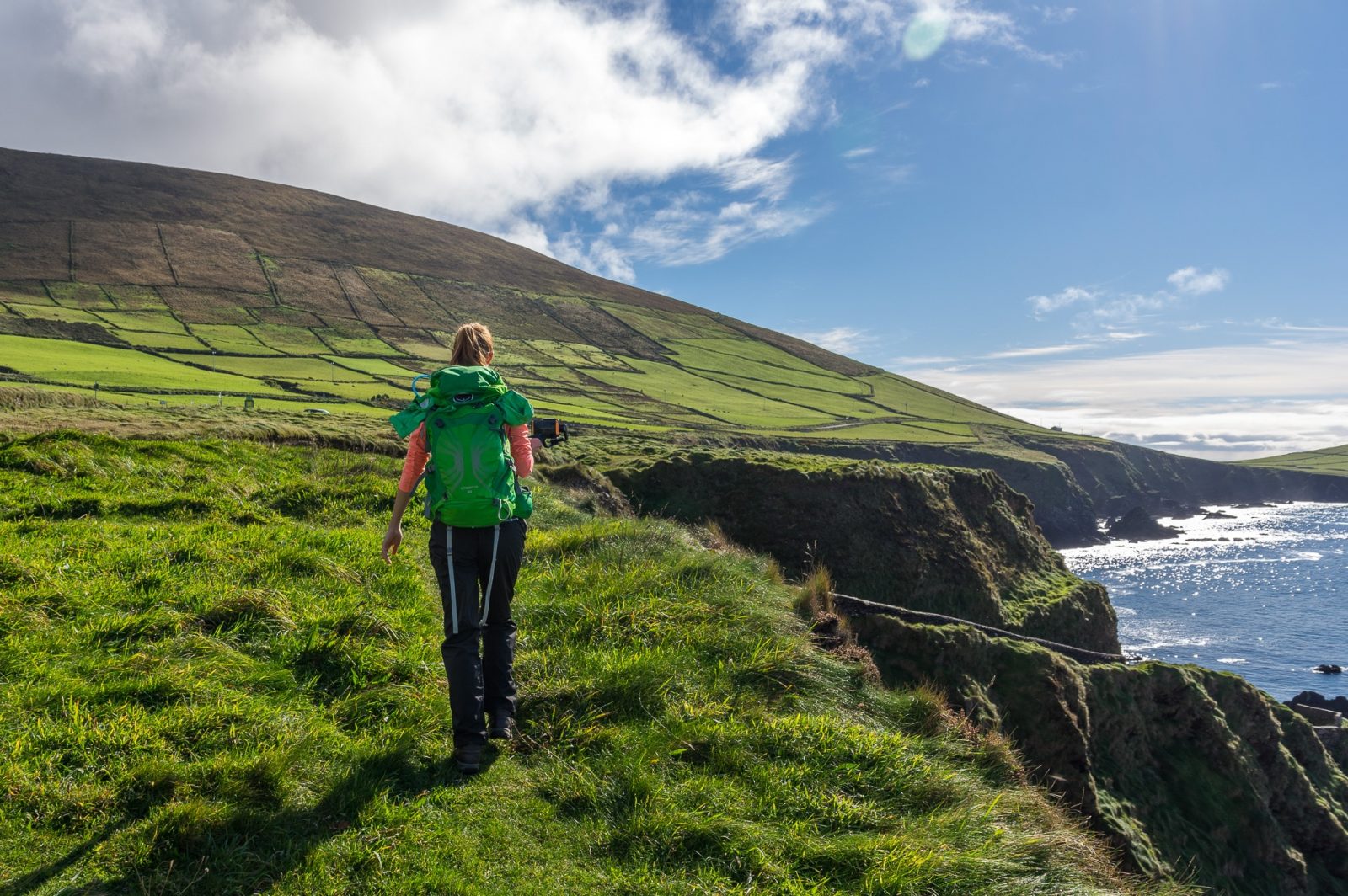 Another famous site, perhaps the most famous of all, is the abandoned schoolhouse which was a part of the movie set for “Ryan’s Daughter” (1970). The movie was about an English officer who fell in love with a married teacher during World War I in a fictional village called Killary with Robert Mitchum starring as the cheated husband. Even though the movie didn’t go as expected it was a turning point for the local community which had the whole crew there for almost a year back in 1969. A small village was also constructed next to Dunquin but it was demolished soon after the shooting was over leaving only the schoolhouse as a proof that a big multi-million production ever took place there. The old building is still standing and though the roof has fallen, it still retains its charm and the view of the bay from its front yard is amazing. 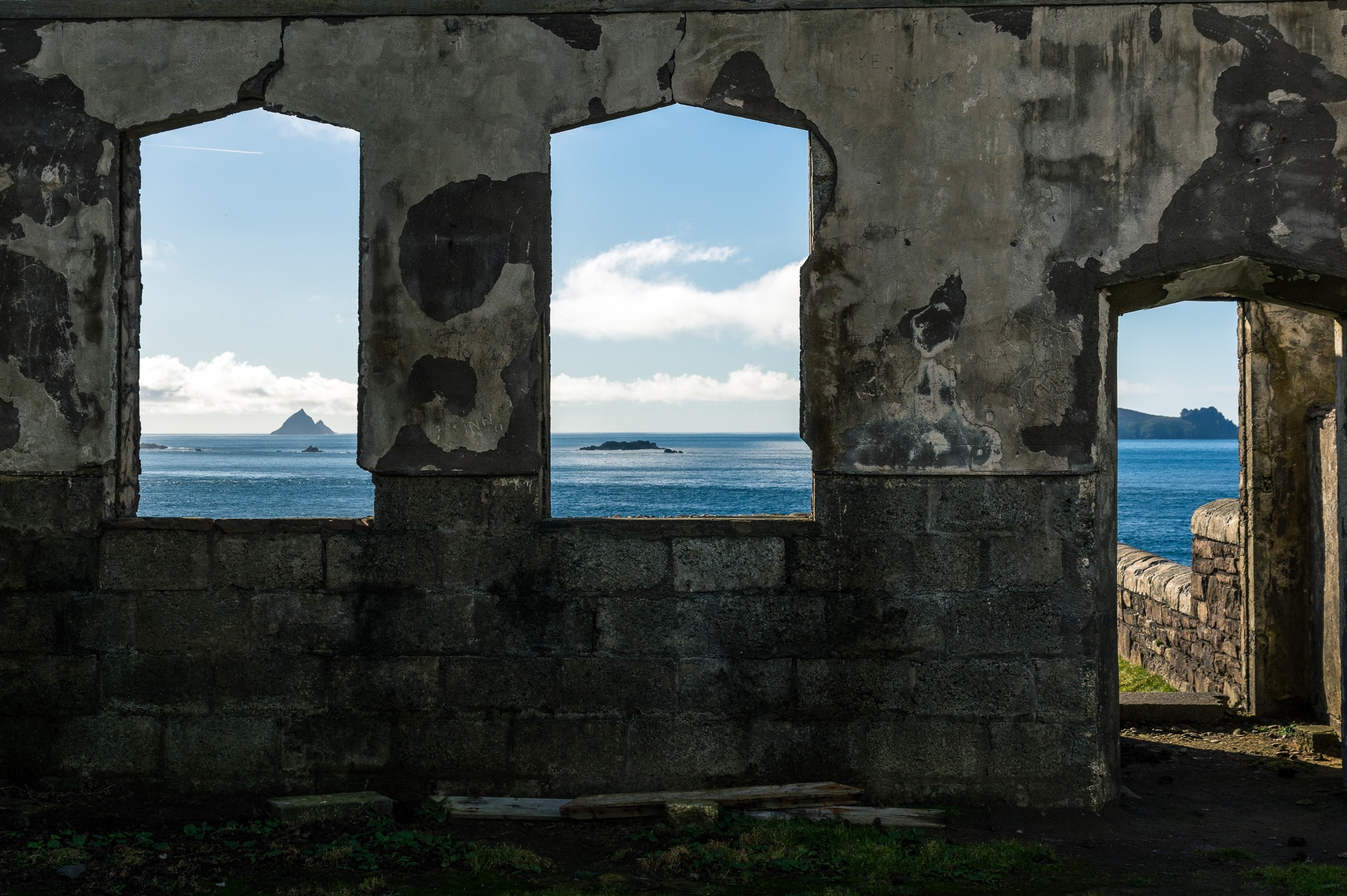 The old schoolhouse from Ryan’s Daughter


Resuming our little hike, we crossed the Slea Head drive and climbed a small hill southeast of Clougher Head the top of which gave us a great angle on the headland and the scenic beach that goes by the name of Clougher Strand. The weather was great and the sky was mostly clear with just enough clouds, far into the horizon, to make the photos interesting. The Atlantic ocean had a very bright navy blue color that day. 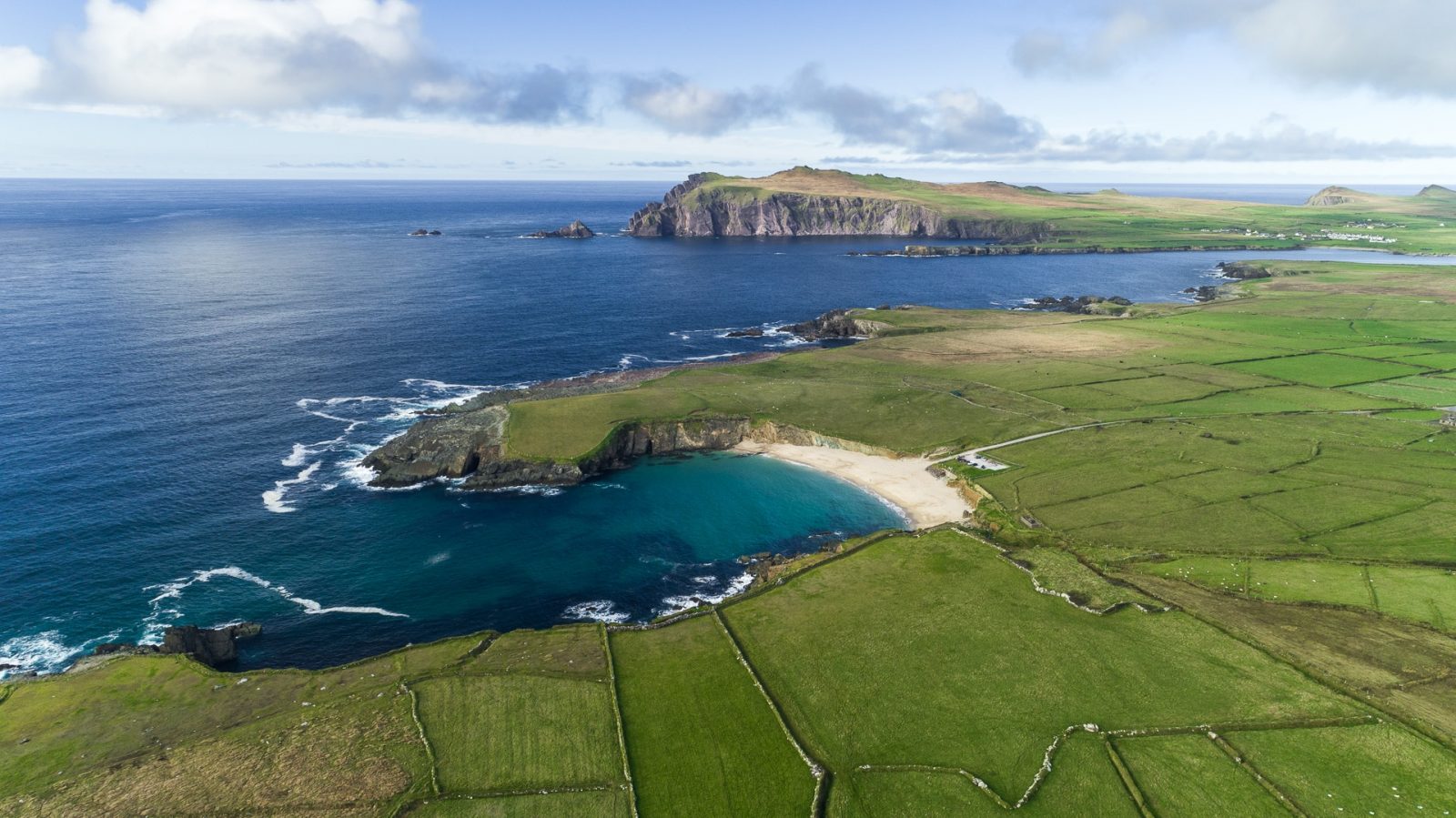 All in all, we spent more than five hours hiking around Dunquin which passed really fast. A short stroll through the village took us back to our place for a quick shower before hitting the village’s pub for a pint.
Kruger’s pub is known as the birthplace of CAMRA (Campaign for Real Ale) as well as for being the westerner pub in Europe. In reality it’s a proper village pub with very simple decoration and a dark mood. The locals go there after work to have a drink and socialize—always in Gaelic. The lady behind the bar was very jolly and the pints of Guiness were as fresh as anywhere in Ireland. It doesn’t get better than that. 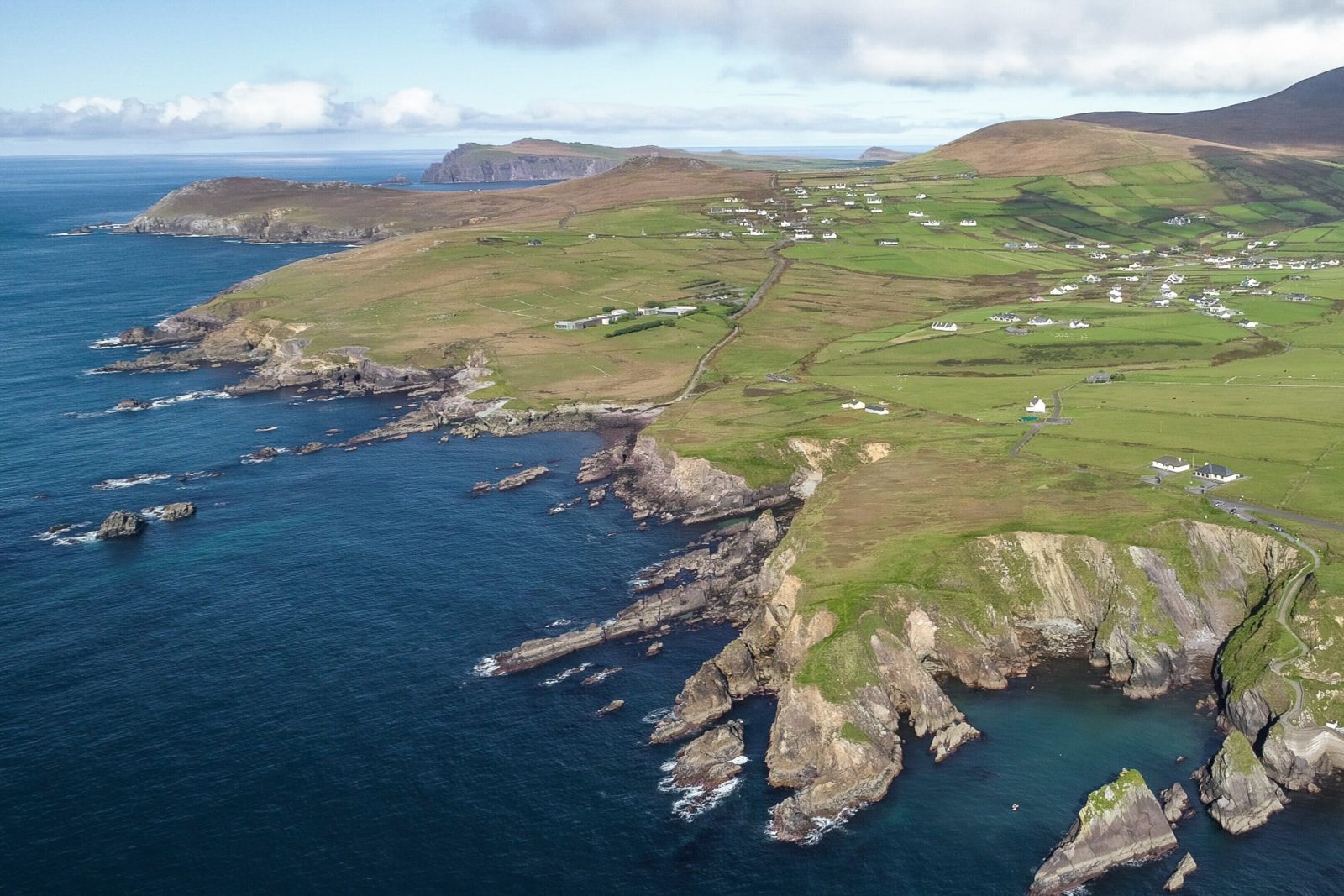 Why you should go

I have a soft spot for small places like Dunquin, and the fact that it was the highlight of my trip to Ireland says a lot about this amazing little corner on the verge of the Atlantic Ocean. For me, Dunquin has more value for the traveler than other, more famous, but still great places like Killarney or the Cliffs of Moher. It is the heart and soul of the Emerald Island. 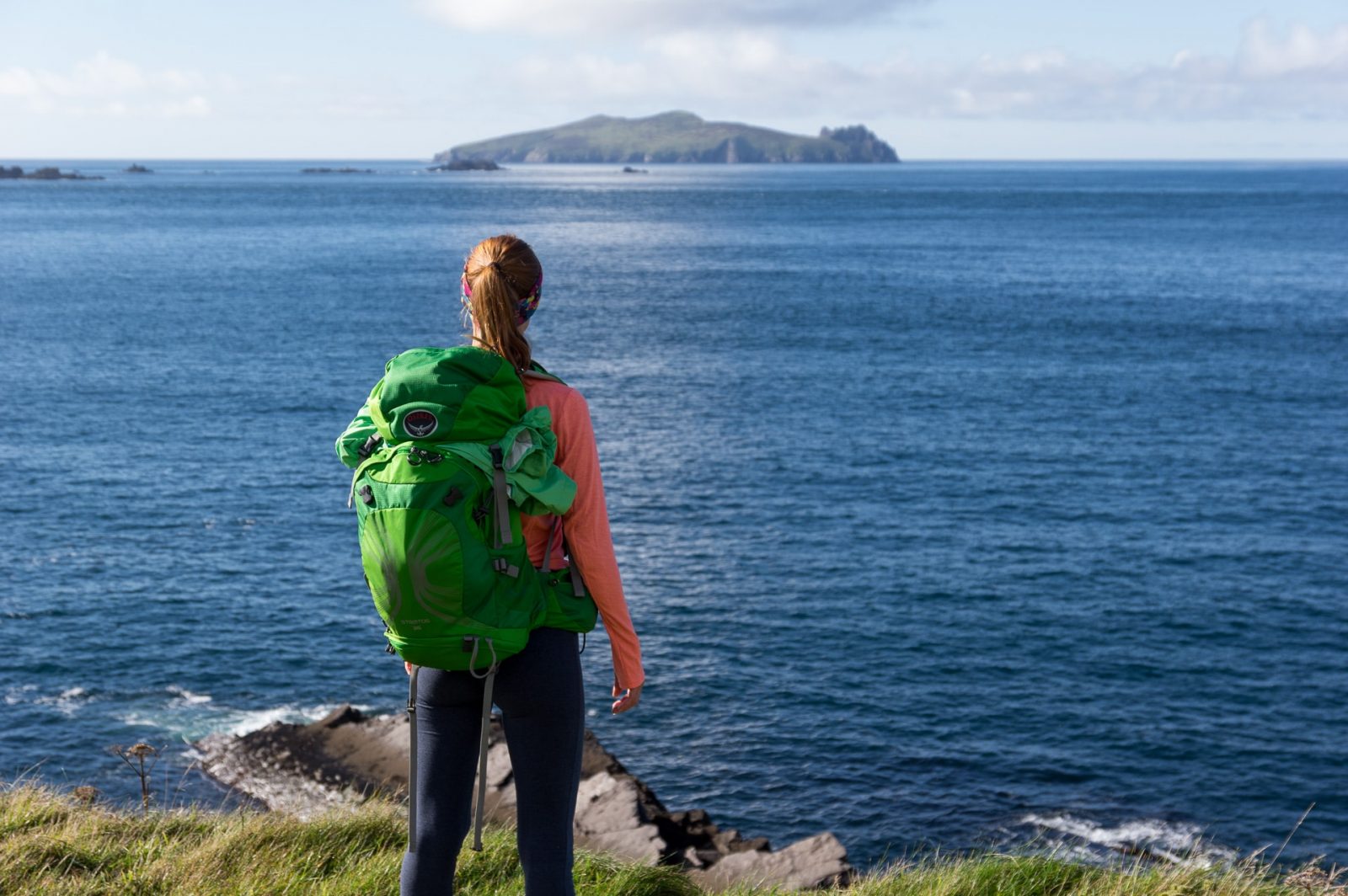