Even though today would be something like a day off. We still agreed to walk for a couple of hours, so that our legs wouldn’t get stiff.

The guys from Hikes4all had arranged a small route to Dilofo village just to stretch a bit. After having lunch there, a car would pick us up and drive us back to Kipi. That would be all for the day.

Needless to say that we woke up just in time to make it for the breakfast. It was Sunday and the hotel was busy with guests who had come for the weekend. Suddenly it seemed strange to be surrounded with people after a week in which our daily encounters totaled mostly in single digits. 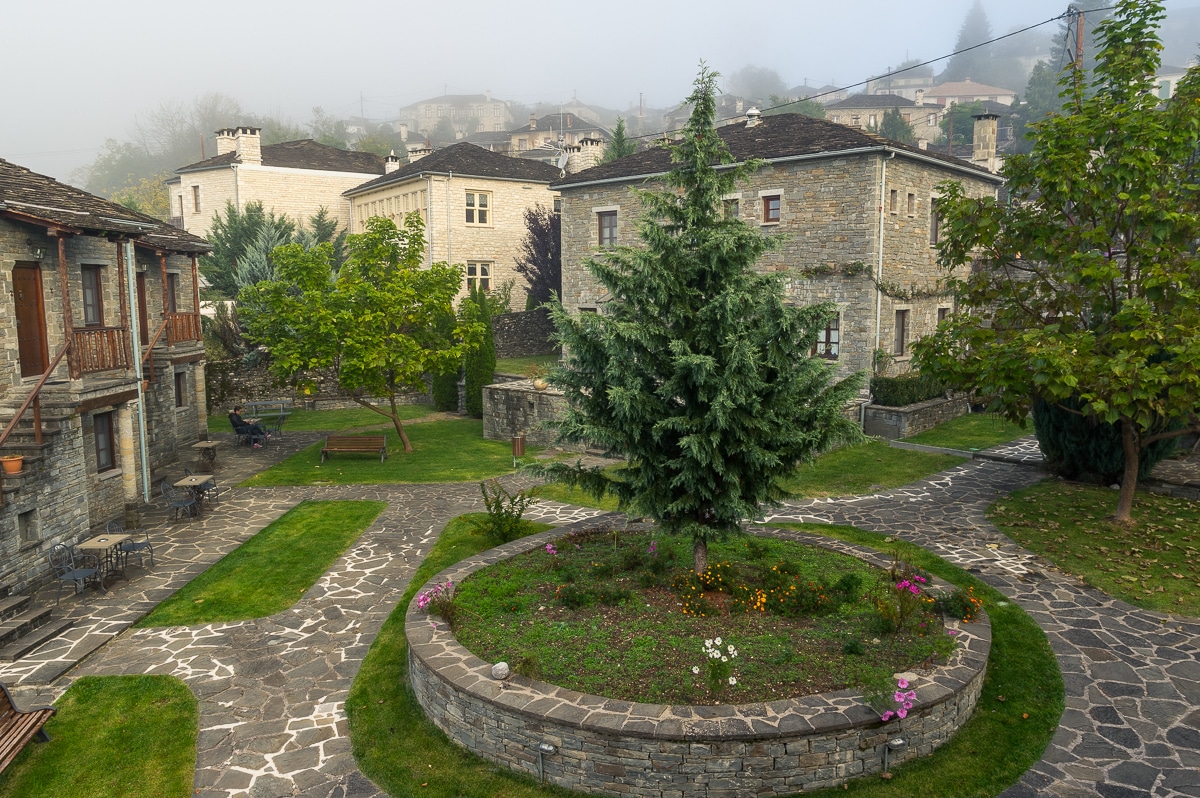 We put on our backpacks which for a change weighted next to nothing and off we went. The trail was five minutes outside the village next to the most famous and iconic bridge of Zagori. Kalogeriko or Plakidas’ bridge is a three arched marvel that connects the banks of Vikos river since 1815 when it took the place of the previous wooden one. Its wavy top makes the bridge look like a crawling worm and makes it very distinctive. 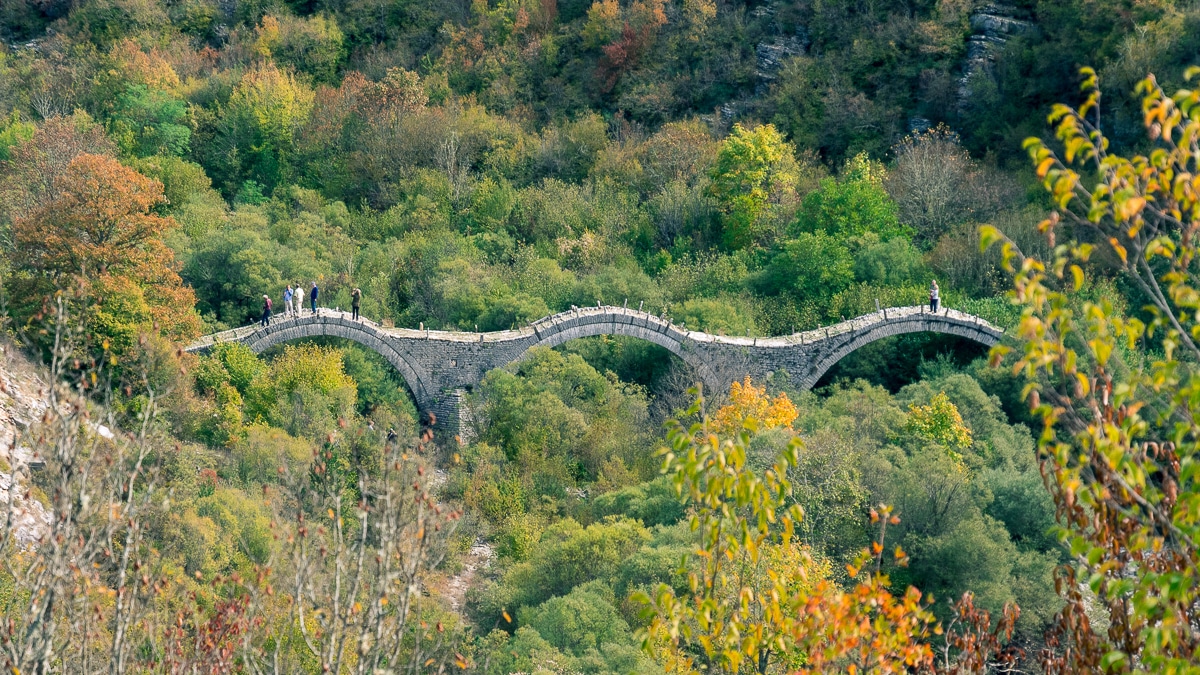 The fact that it is exactly next to the main road means that lots of people stop there to get a picture of the famous landmark. Some of them were even having a swim in the river. We crossed it and found the trail leading to Dilofo on the other side. The path was zigzagging through the dense forest that protected us from the sun which was strong that day. We met at least five groups of people, many of them were picking mushrooms. We greeted and were greeted by everyone.

People have no social tightness in nature, it subsides and a more loose and euphoric disposal kicks inClick To Tweet 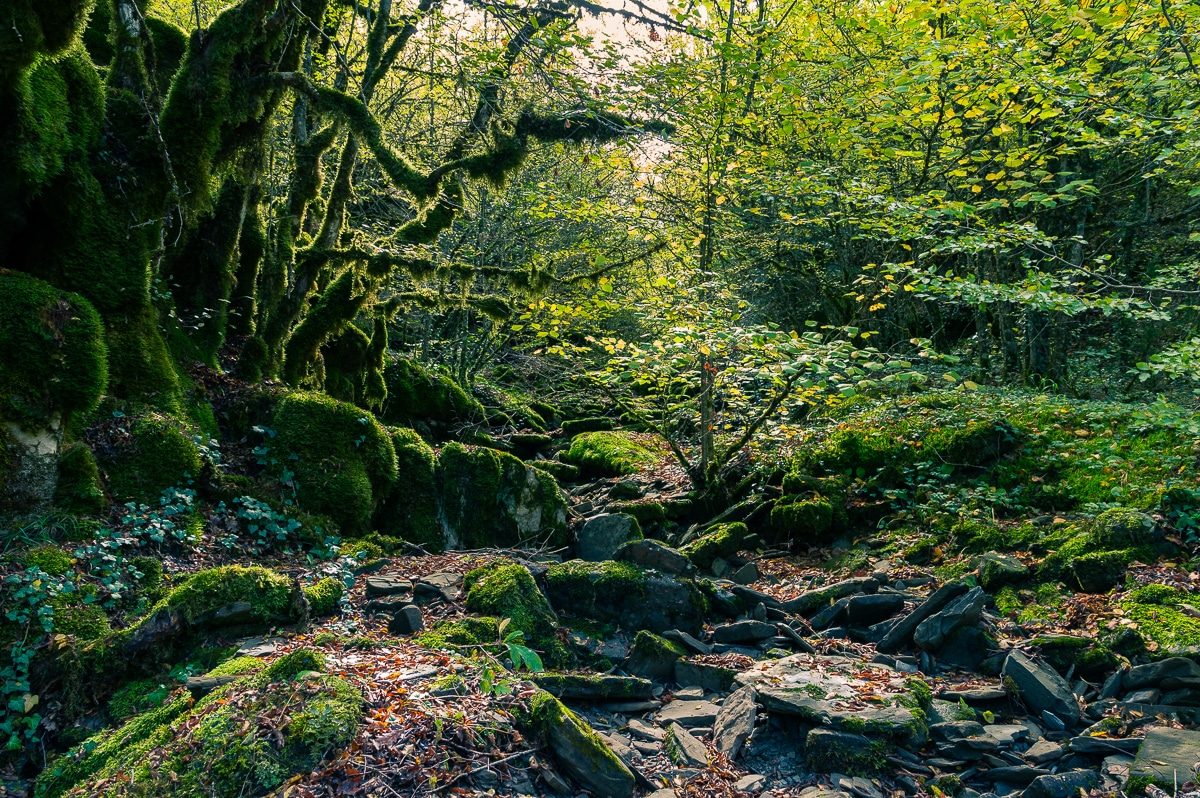 At some point the path led us out of the woods and stopped by the road only to continue after Arkoudas’ Bridge which was across.

Captain Arkoudas was a chieftain who took part in the Macedonian wars against the Ottoman Empire. He was killed by the Turks somewhere near the bridge and so the locals named it after him. He had actually been to Dilofo searching for one of his men before the Ottoman army ambushed him and his comrades. 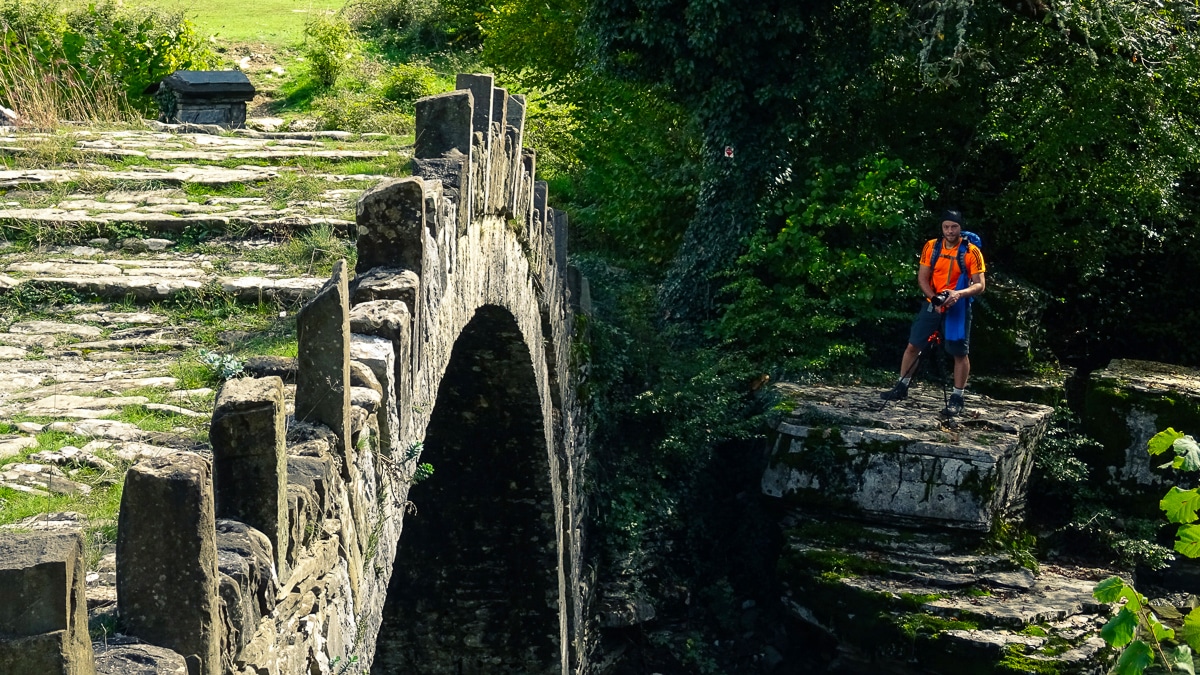 Dilofo was no more than forty five minutes from there. An enclosed stone water tap next to the trail signed its entrance and a few meters after we turned right, a calderimi started and took us all the way to the square. Even though it was a “busy” day, there were only two tables with people sitting on the small restaurant. Just in front of it was a massive plane tree—one of the biggest we saw that week and just next to it was the empty school building which had apparently been closed for years. As was the post office with its yellow letter box worn and rusty from many years of uselessness. The owner was friendly as is almost always the case around Zagori. We ended up talking about Dilofo and the life there. 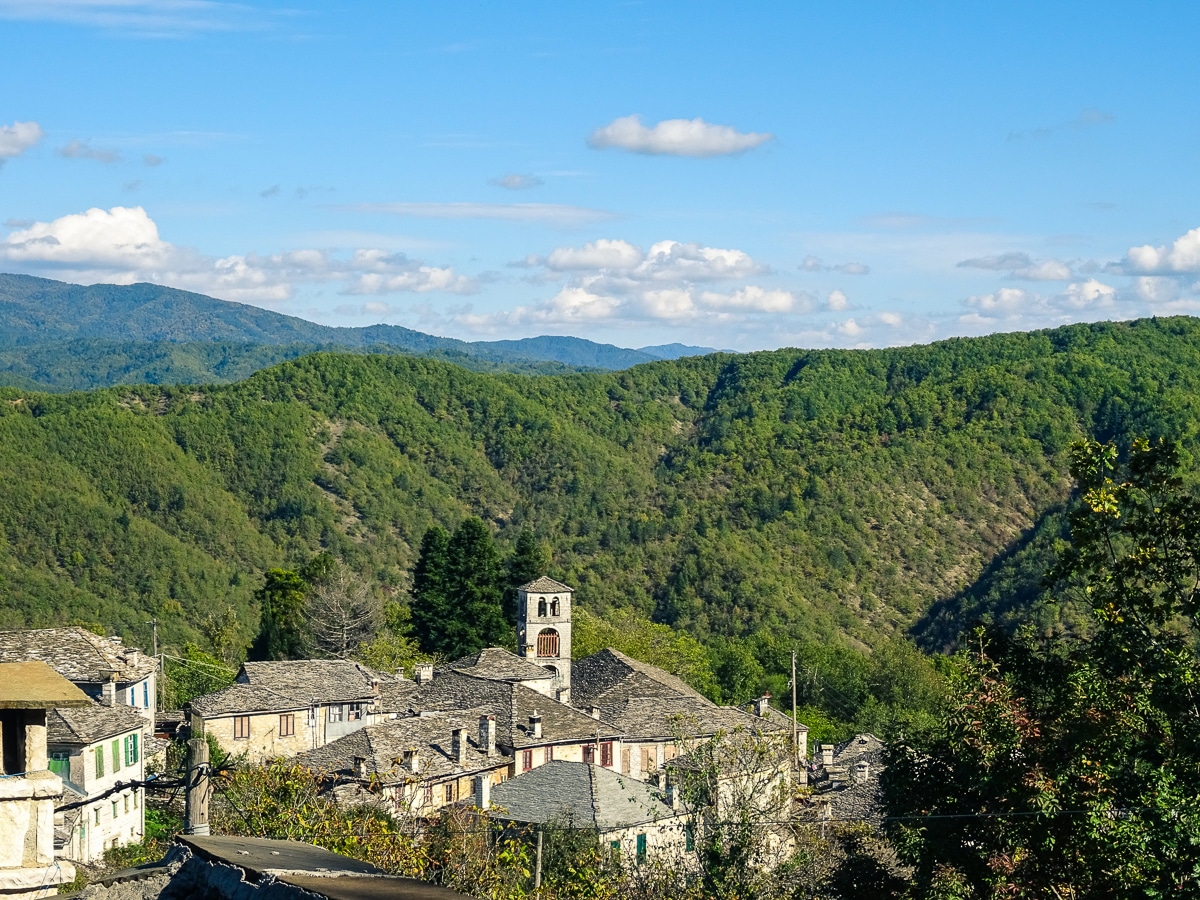 Our lunch was on the table soon and it was really something. Wild boar sausage with eggplant salad and tyrokafteri—a spicy cheese dip. I can’t stress enough that for once more the food was exceptional even for Greek standards while the prices were extremely low.

After finishing our meal, we paid the bill and went to see the rest of the village. Actually there were some people around, but all of them were sitting on the two cafes by the main road. That’s also where the rendezvous point for our pick up was.

Once back in Kipi, having a couple of hours before the sun would set, we decided to explore the village a bit. First we went to Milos bridge which just outside the village to the east.

The particularity of this bridge is that along with its two arches there is a third smaller one which doesn’t make it a three arched bridge though. Next to it, was the old mill (milos) which had a water ditch in front of it. The ditch was spanned by a tiny stone bridge—not more than three meters long. Between the two bridges a small dirt road passed through forming an “s” before ending on the river bank. Talking about rural landscapes, this would probably be one that John Constable would sit and paint. 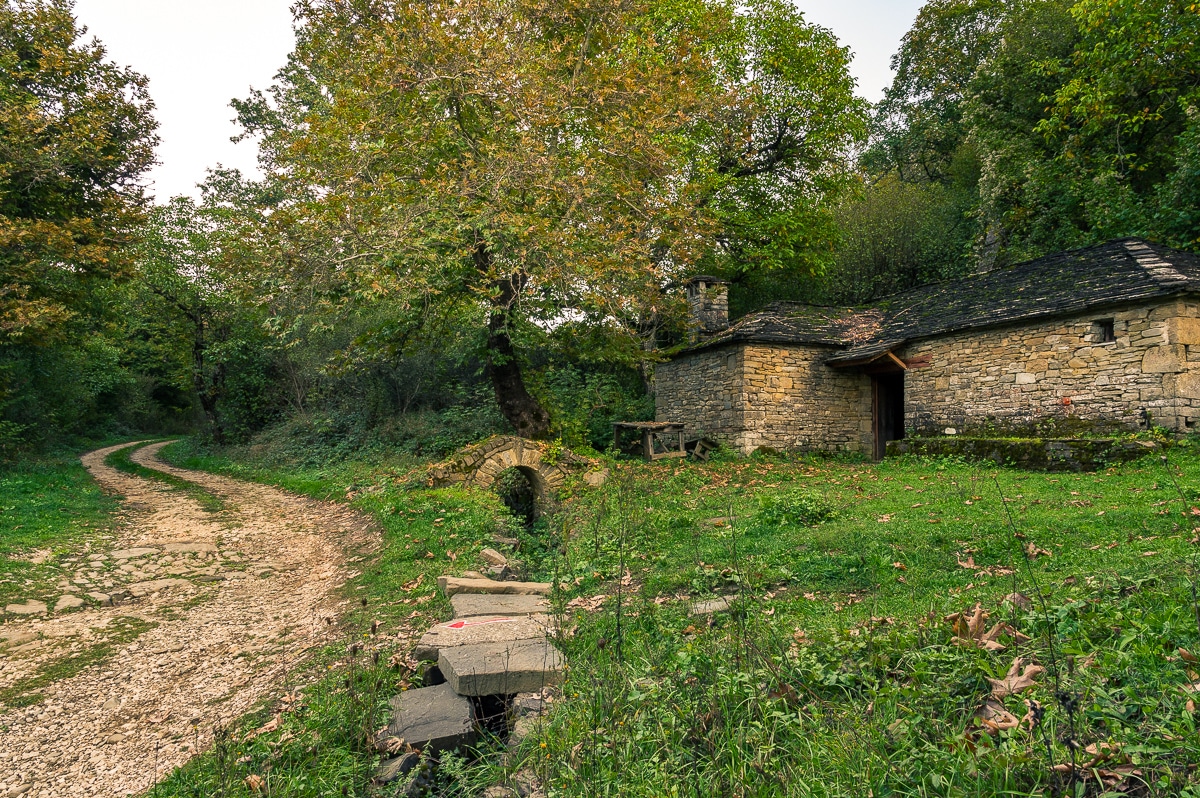 The sun was almost down and the village lit, by the time we took the road back. We didn’t feel like going for dinner yet, so we wandered on the dark alleys of the village which was deadly quiet. Once we reached the top, we looked on the stone rooftops that covered the slope all the way to the road and our hotel. It was pitch black and the time for dinner had come…

Next day : The Return 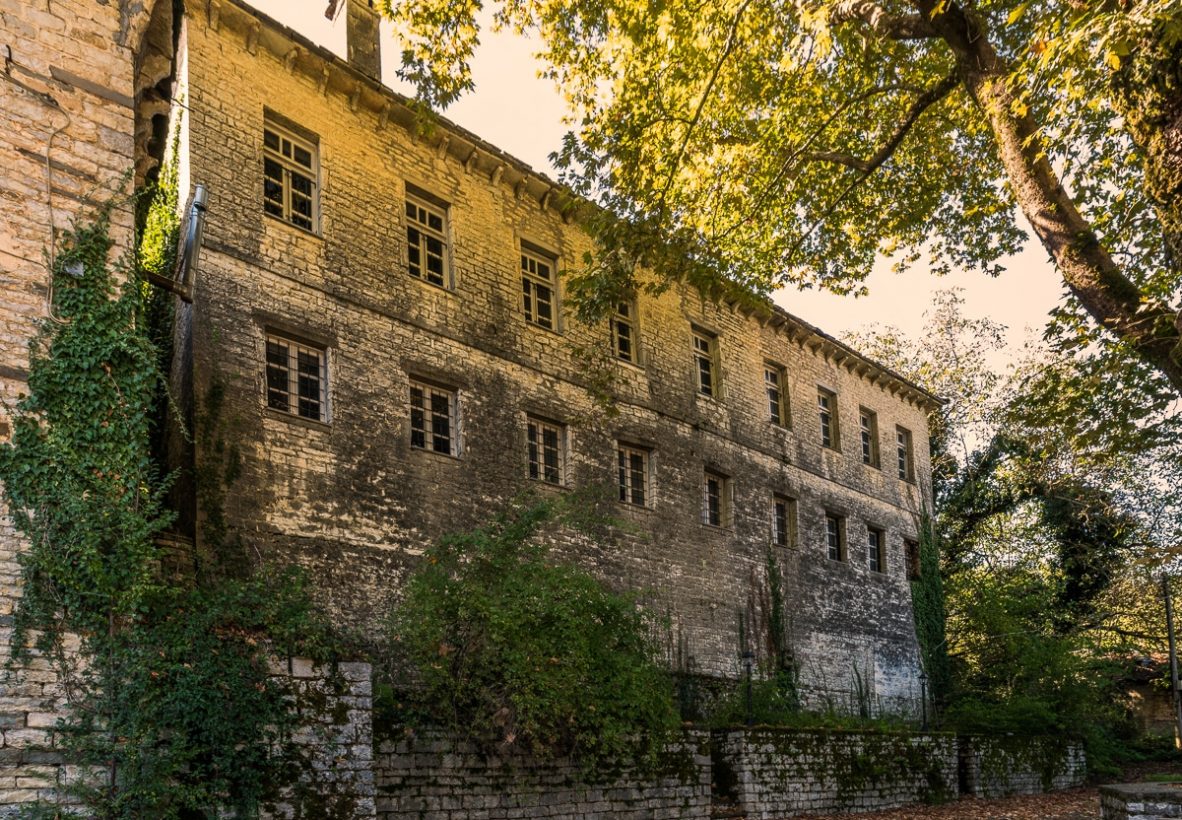 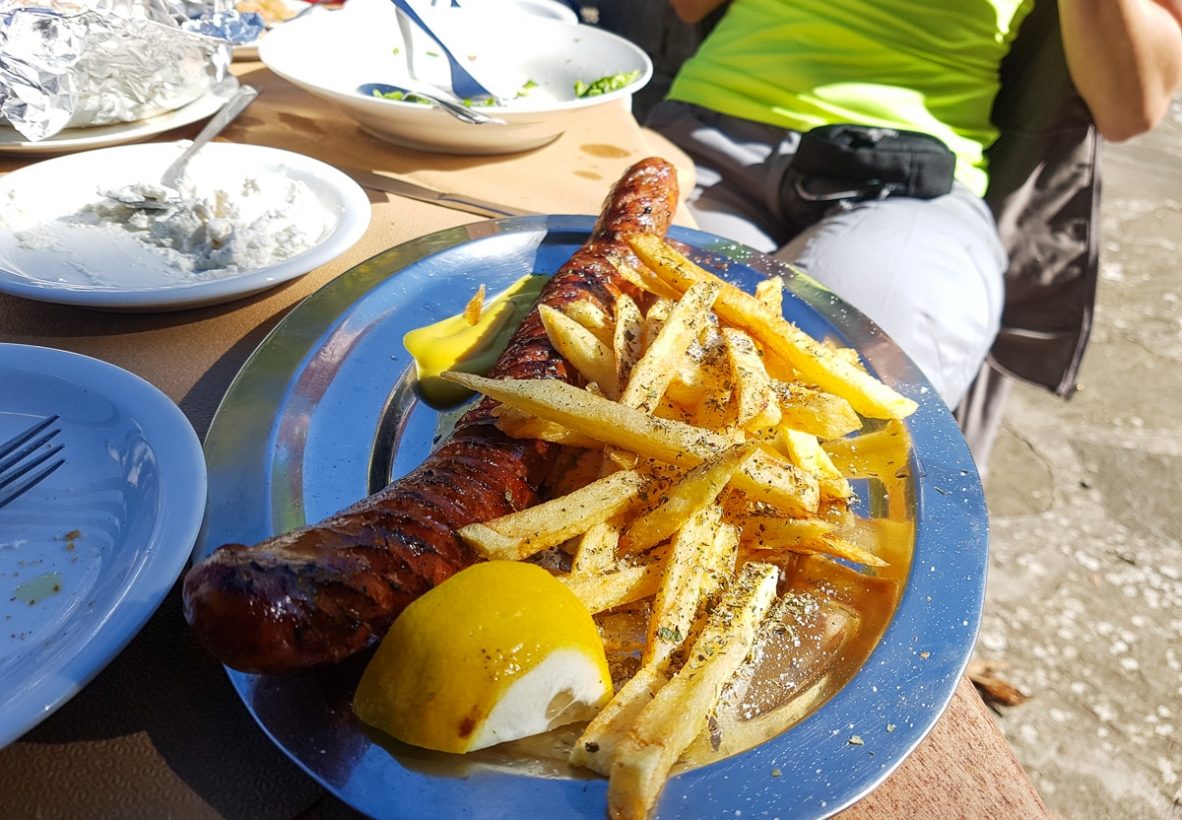 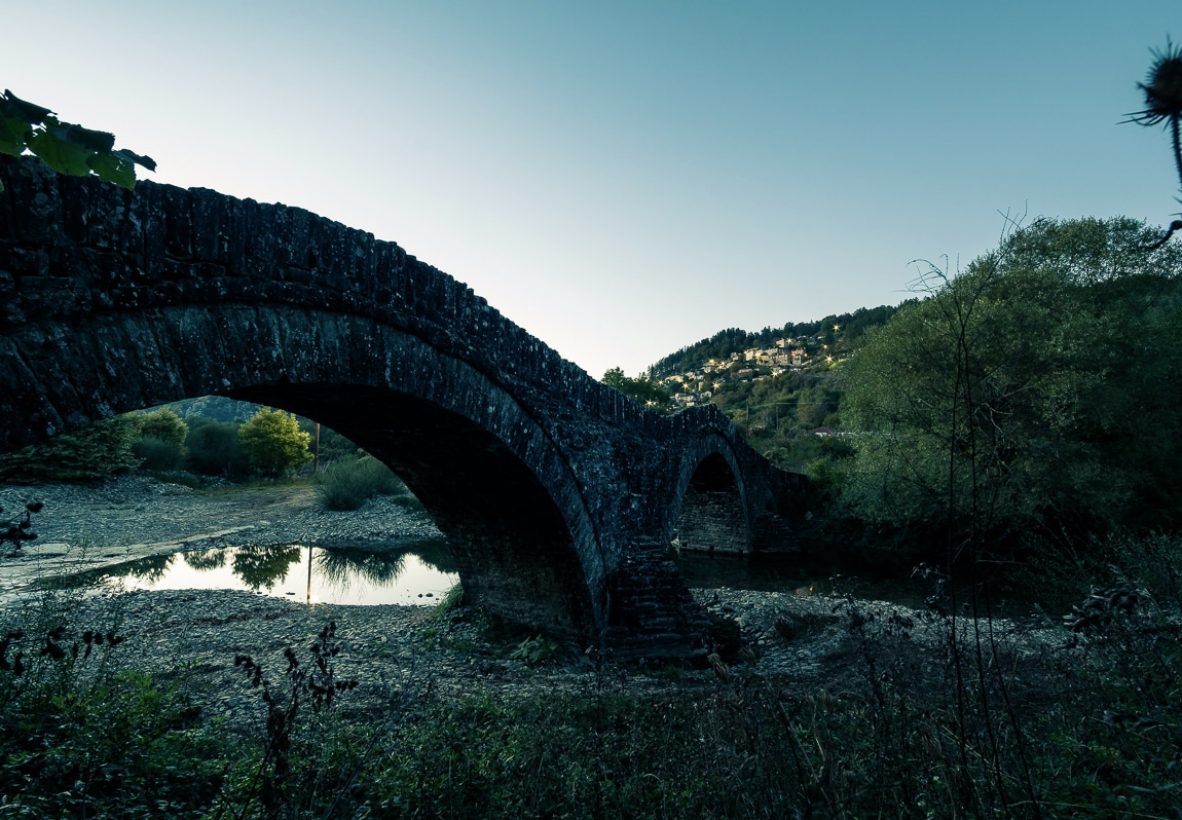 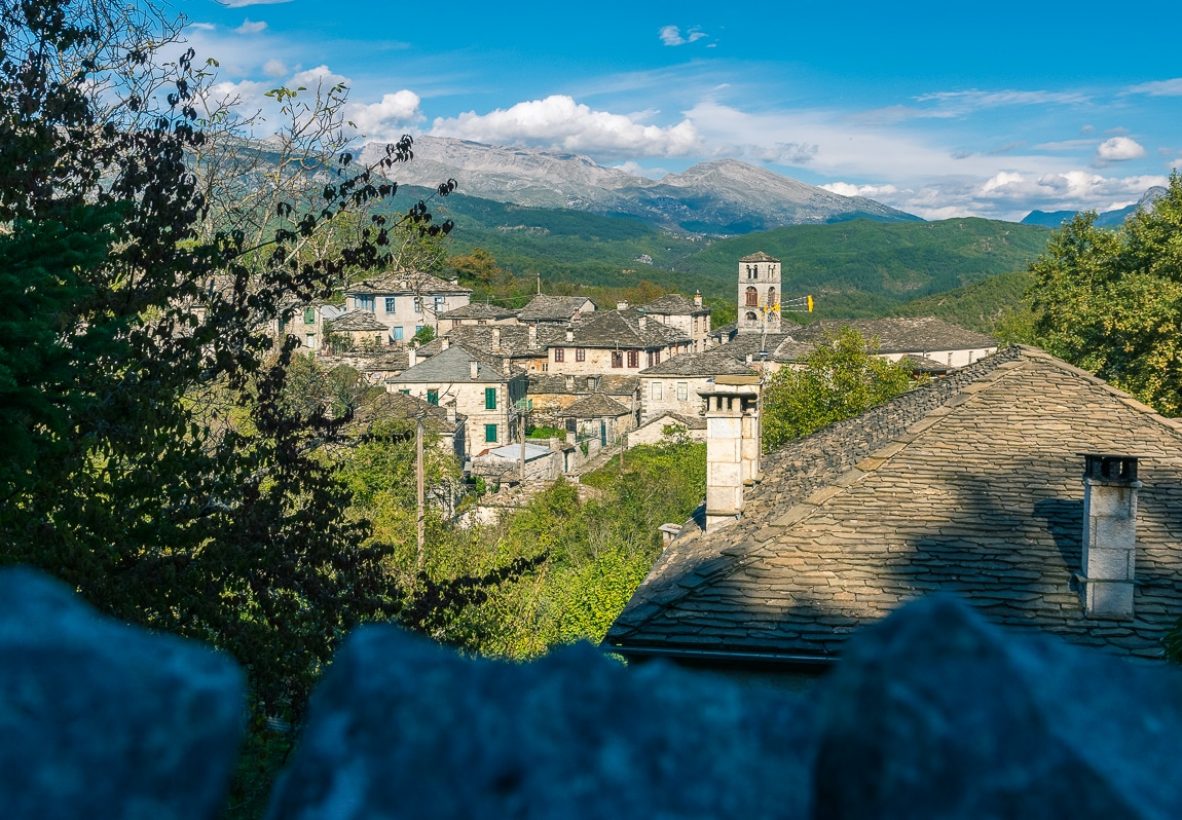 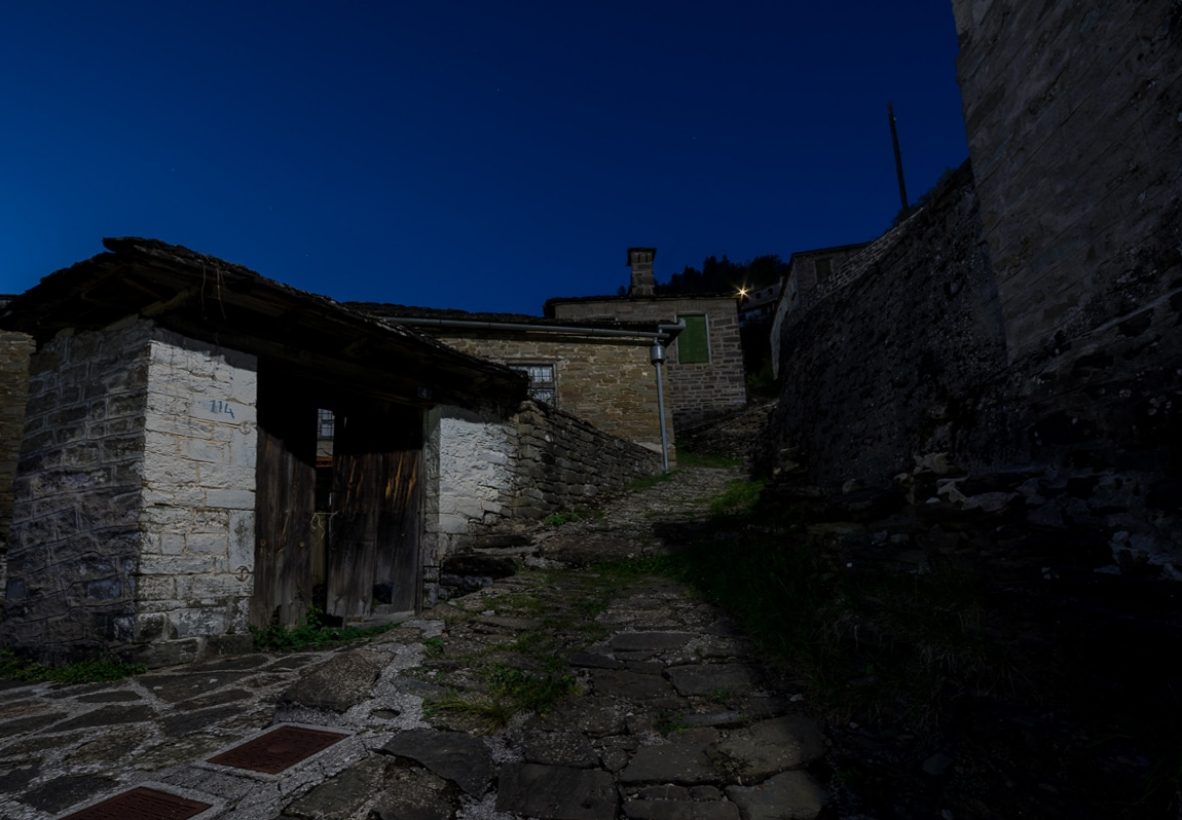