Deep in the heart of Greece, at the north western edge of the fertile Thessalian plain, is a place of mystical awe and medieval mystery. Meteora is the plural of a Greek adjective meaning “hovering above ground.”

This word perfectly describes a number of monasteries that are built on the top of monumental monoliths made of dark grey sandstone, some of them five hundred meters high. 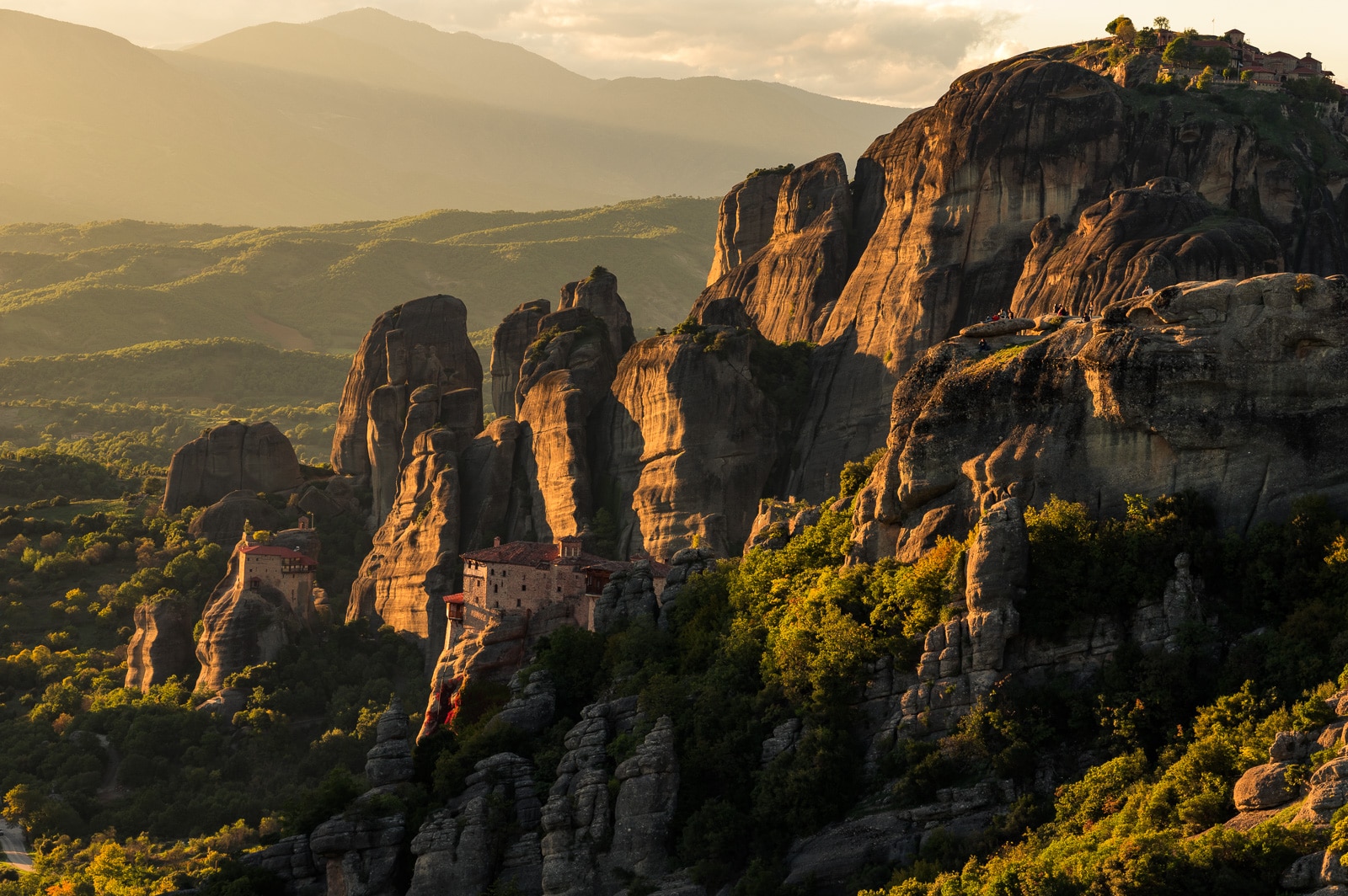 People looking at pictures of Meteora for the first time, often think that they are some kind of artwork out of a fantasy novel. The monasteries are built like forts on the sky with no apparent entrance. It just puzzles the mind: how did they get up there, and even more mystifying, how did they build them? Back in the 14th century, when the first ones where constructed, there were no bridges or steps nor cable cars. The rock walls are vertical and look buttery smooth, how?

It all started at the end of the first millennium when the first hermits arrived on nearby caves and soon after created the first sketes (small monastic communities). Later, they turned into bigger monastic communes, and its then when the first monasteries were build. It is indicative that the monastery of Holy Trinity took around seventy years to be completed. 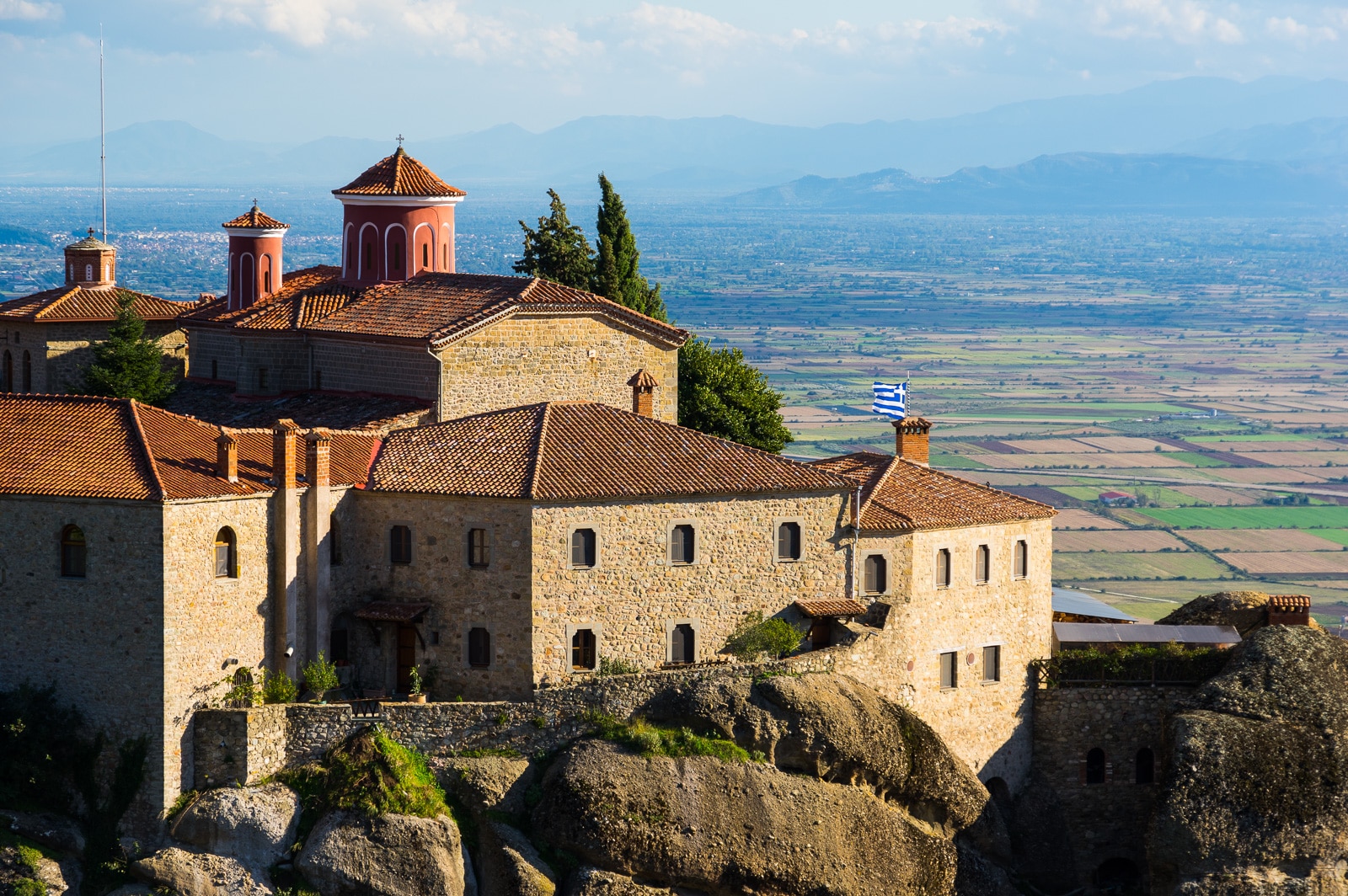 Initially, the monks wedged beams into the rock and connected them with scaffolds. That was the only way for people and materials to reach the top; an extremely risky business. Later, they were replaced with nets and baskets that the monks pulled up with a rope. Still, a leap of faith was needed. According to the legend, the monks didn’t replace the rope until God decided that the time had come, both for the monk in the basket and the rope.

Today, from a total of twenty four monasteries, when monasticism was at its peak (15th century), only six remain. Among them the monastery of Transfiguration on top of “platis lithos” (wide rock) which a monk first named, “Great Meteoron.”

Normally we would use the trails to reach the monasteries but coming straight from a 100km hike in Zagori we decided to go around by car leaving the trails for another time. We arrived mid–afternoon in Kastraki—a small settlement just outside Meteora. The gigantic formations stood impressive above the little village, their long shadows covering the fields like mourning veils . There was still time to catch the sunset so we left immediately. One of the best places to set a camera is outside Varlaam pointing south to Rousanou monastery with the city of Kalambaka far away in the background. I wasn’t disappointed. As the sun went down, the light turned warmer by the minute and its strong contrast got mild. It was all you could hope for, a true golden hour.

A couple of hours later in Kastraki, the night had fallen and the clear night sky was ornamented with millions of twinkling stars that were visible despite the fullness of the moon. The great monoliths had turned into sinister dark figures against the sky, which oddly enough, still retained a dark shade of blue. 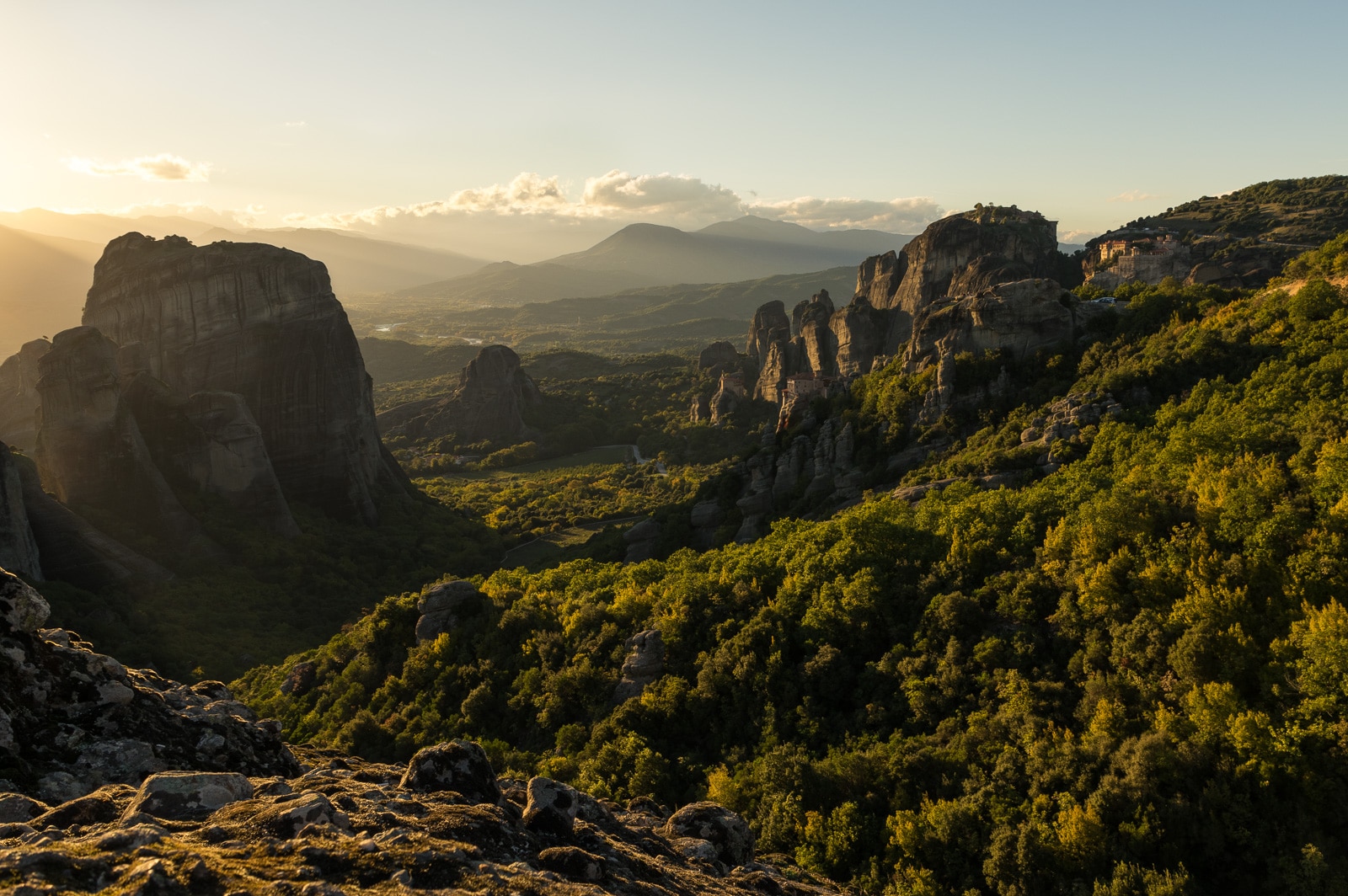 In the morning, we decided to visit the Great Meteoro, the biggest monastery of them all. It had some very interesting historical exhibitions including one for the Greek revolution and the resistance in WWII. Now, for people who want to visit the monastery for religious reasons, there may be a slight disappointment. There were numerous buses outside, and a flood of tourists waiting to get in. Basically the whole experience is more museum-like than religious. As for monks, I didn’t see any. Obviously they were isolated in the forbidden areas of the monastery.

The Great Meteoro is renovated and all its structures are in excellent condition. The monasteries of Meteora were so isolated that were also used for safekeeping many valuables like old books and several relics. 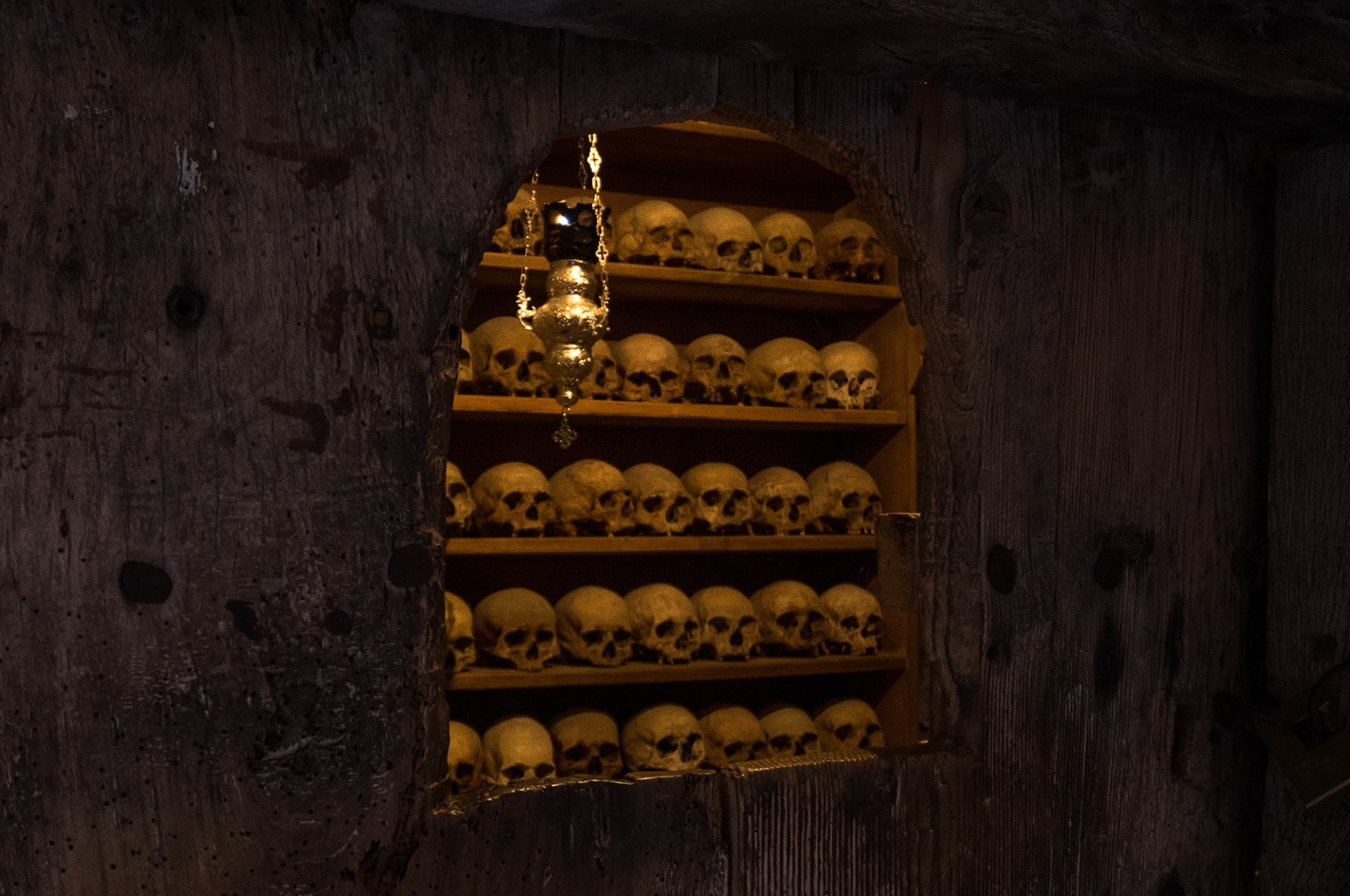 I was particularly impressed by the monastery’s codex collection. Codex copying was a great part of monastic life during the Middle Ages, and having no other means to duplicate these ancient books meant that everything was done by hand. The calligraphy and ornamentation in some of them is exquisite, and they are truly pieces of art, adding to the mystic ambient that surrounds the place. And, so does the skull chamber—a small room where the skulls of the monks who lived and died in the Great Meteoron are stored. The visitors can also see the monastery’s old kitchen, which is intact as it was centuries ago, and the cellar with the impressive 12.000 liter old wine barrel. 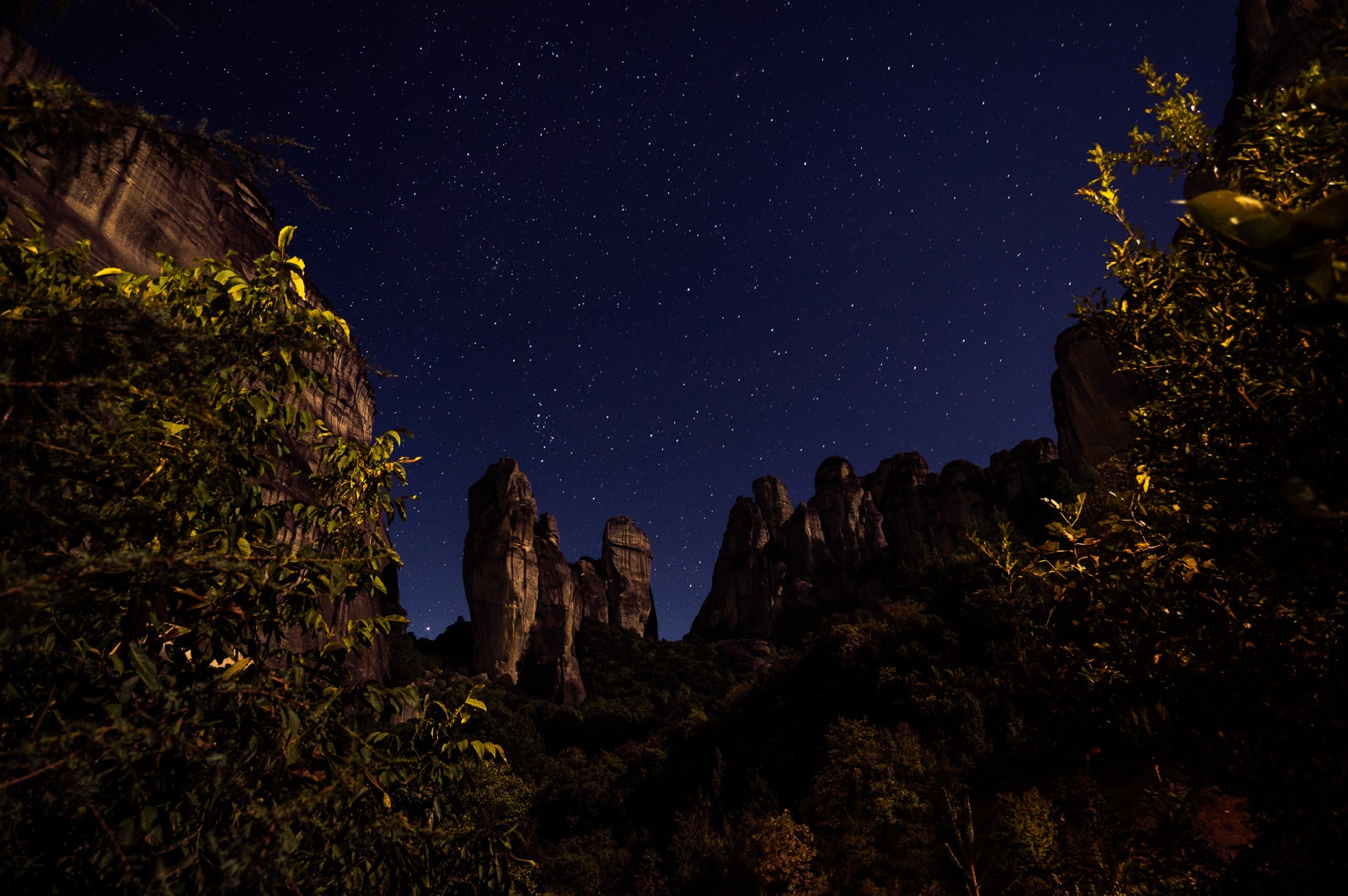 Meteora is one of the most interesting Unesco Heritage sites and undoubtedly worth a visit by anyone who plans to travel around the Greek mainland. An ultimate photographic destination, all year round. It is not very big, a day or two will be enough to explore most of it, but the spell it casts on the traveler will last for years. I would like to go again, this time to hike some trails and perhaps try rock climbing.

Where We Stayed
We had booked in advance and got a great price for Pyrgos Adrachti. A great hotel at the edge of Kastraki village which is literary between the sandstone monoliths. Basically we could see Meteora from our window. Service was also great, we highly recommend it.
Share989
Pin100
Tweet
Share58
1K Shares
Gallery 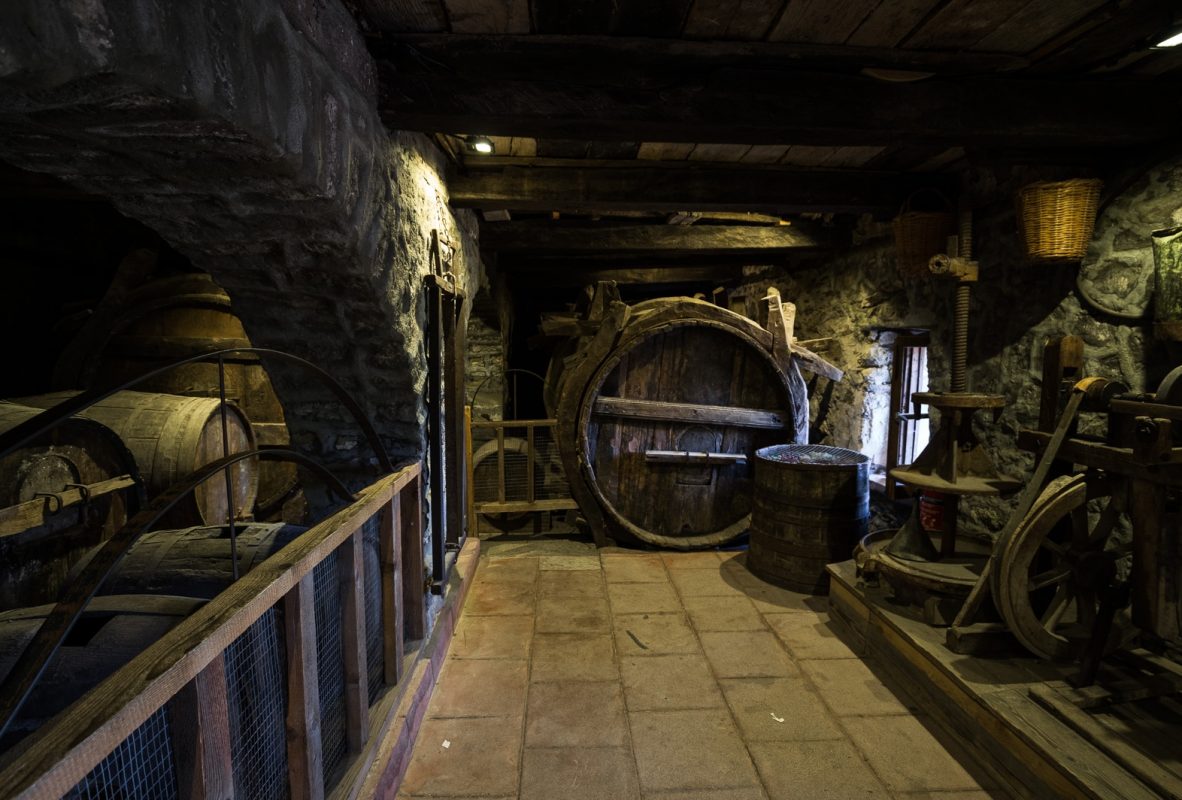 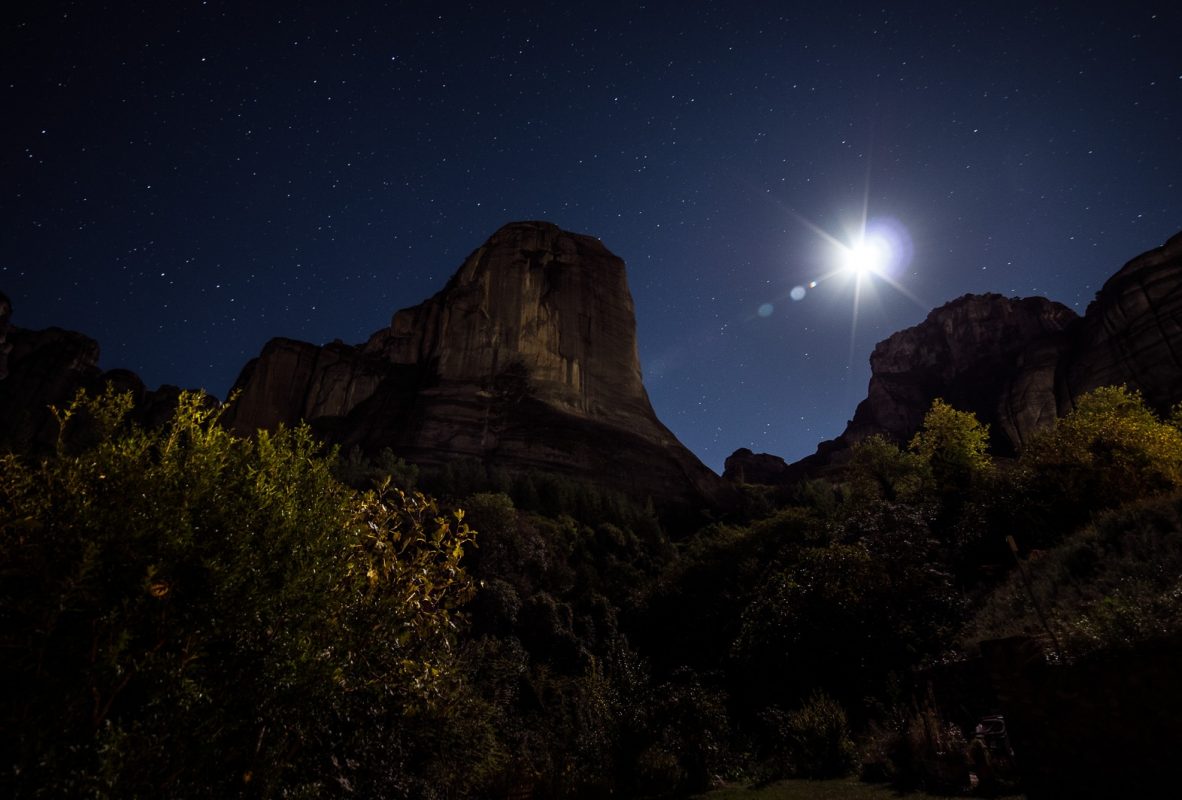 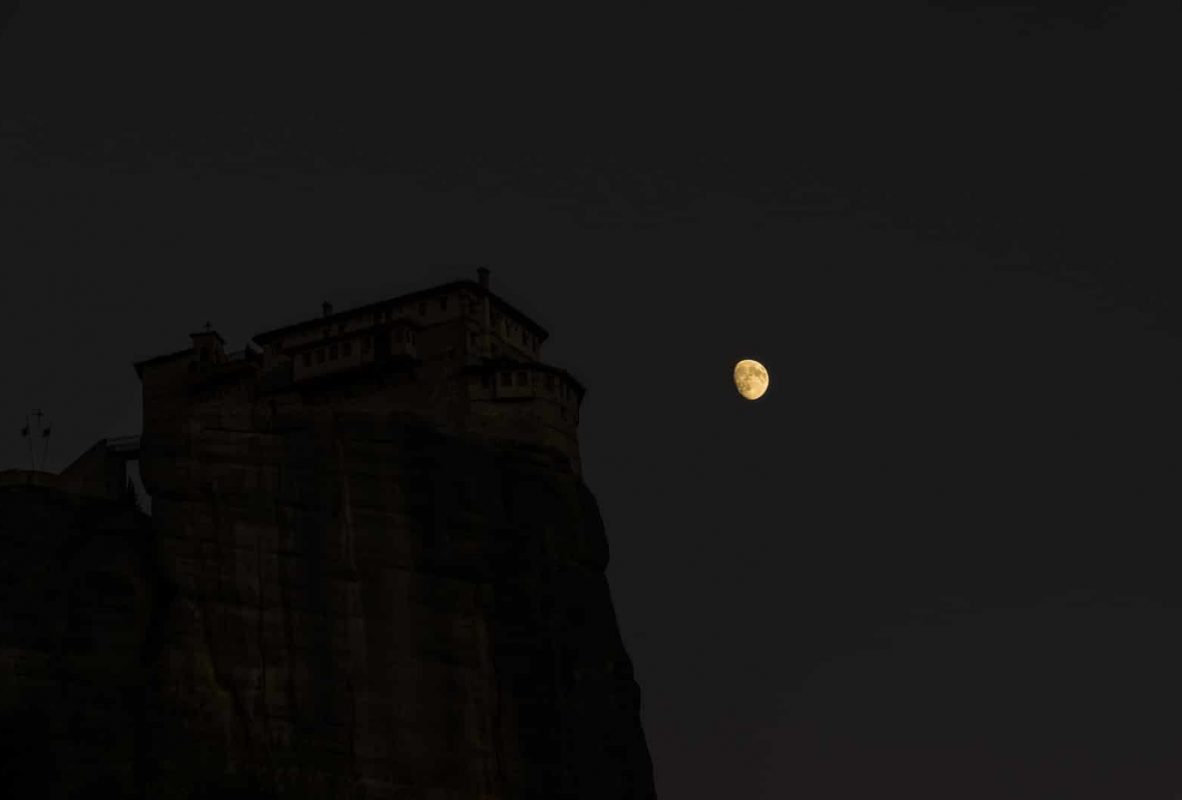 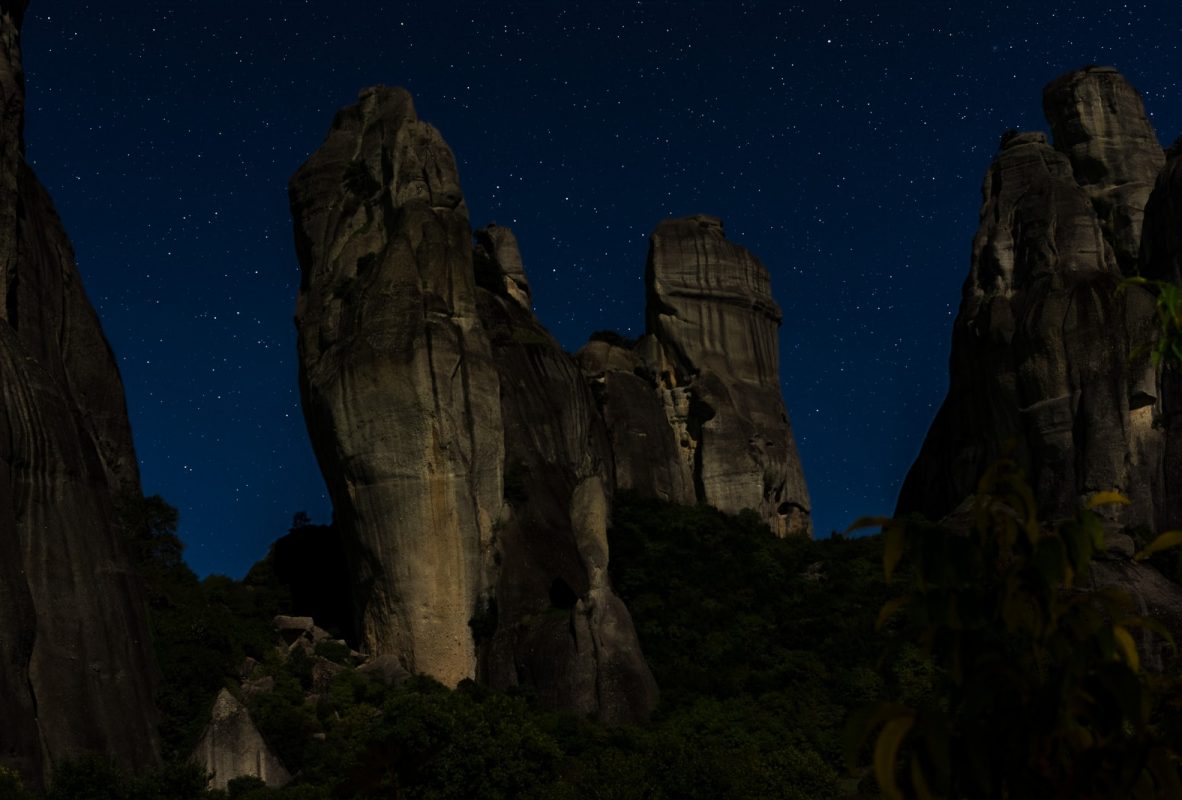 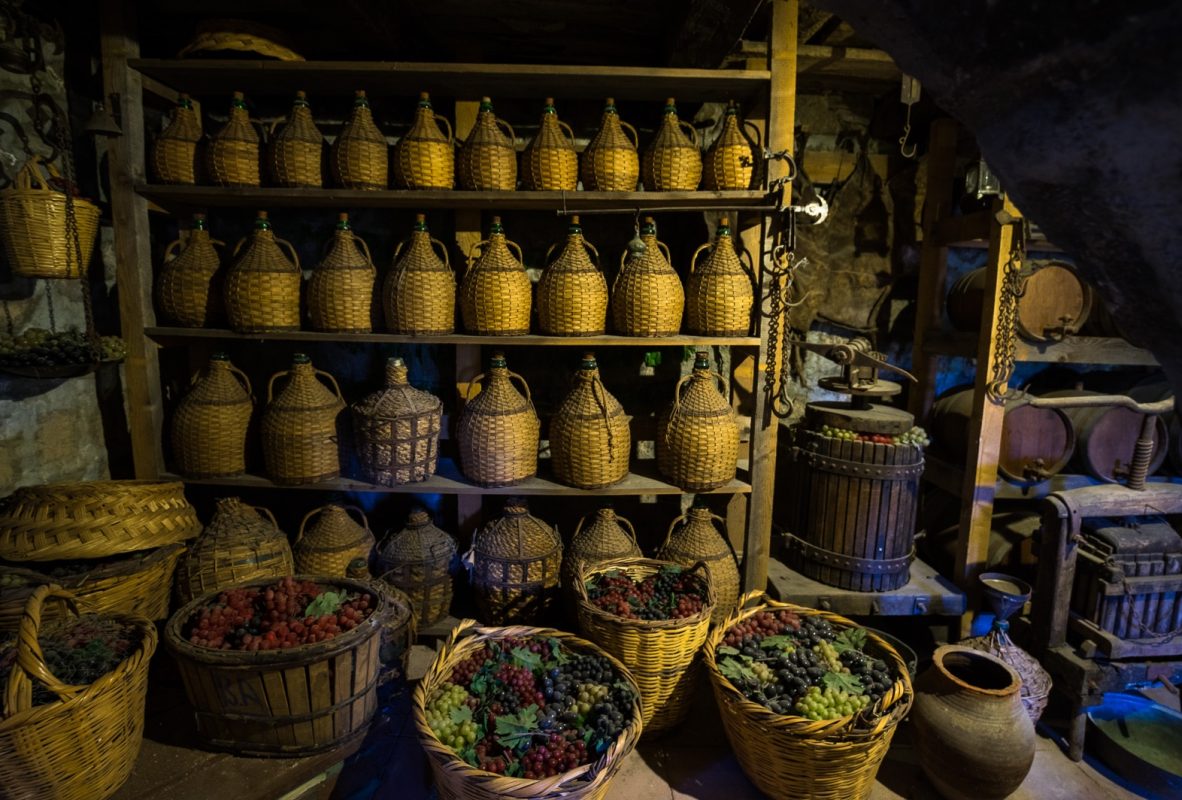 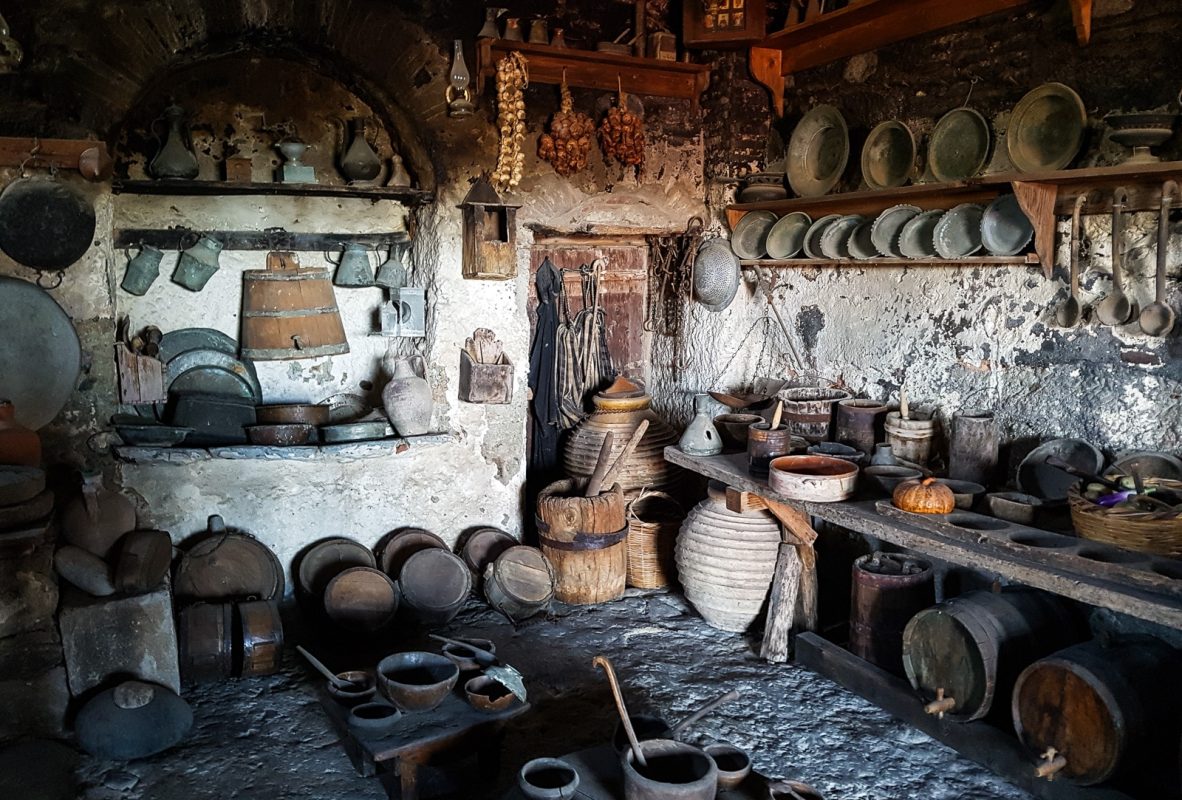 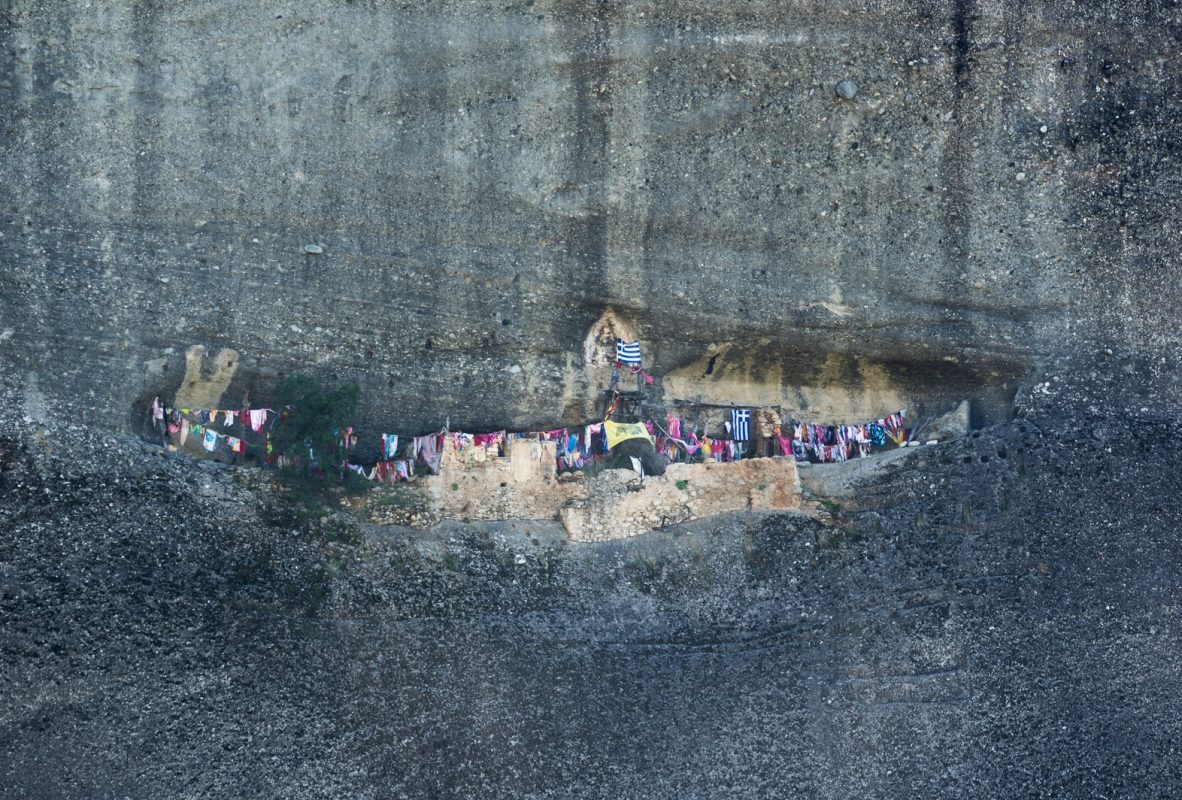