People and especially media people tend to tell stories about epic journeys and successful accomplishments. But truth to be told there are much more to be learned from a failure than a success thus the reading of a defeat is much more useful to a reader than an epic story of triumph.

Mount Brandon in Ireland is the highest peak of the Dingle peninsula. At just 952m, it is 87 meters lower than the country’s highest peak-Carrauntoohil. It’s also part of a pilgrimage called the Saint Brendan march and the way to the top is well-marked with crosses and white poles in between. An easy climb that shouldn’t pose a problem even for beginners. The low difficulty was the only reason we attempted to go up there in what the forecast predicted a rainy and windy day. It would be our warm up before attempting Carrauntoohil.

We left the scenic Dunquin and drove for half an hour through green hills and little villages to Baile Breac where we would start our climb.

As we were parking our car just next to the path of St. Brendan another car was turning around and leaving. They probably didn’t like what they saw. The mountain was covered in fog and light rain was falling from time to time.The wind was biting. We put rain covers on the backpacks and set for the mountain following the path next to the altar of Virgin Mary across the small bridge. 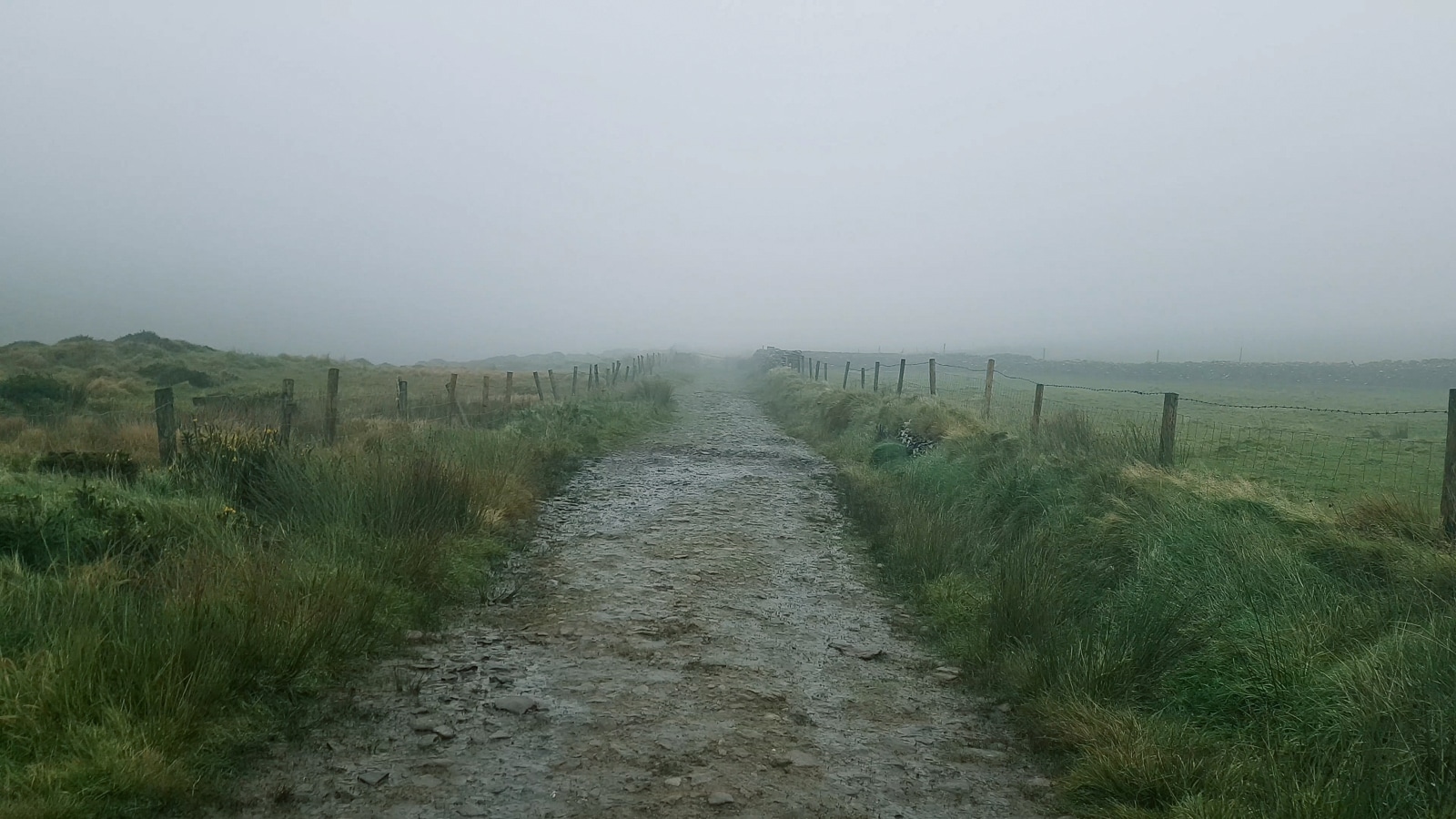 After a hundred meters on the dirt road we saw the first white pole to our left and turned to meet it. We walked through a prairie in the rain which was now a little more intense. The fog allowed us to see the next pole or two but no more than that. The fresh air smelled of wet grass and the small stream in front of us gurgled.

We crossed by hopping on a few stones that were lined there. The next prairie had nothing around except a flock of sheep which sat down quietly and endured the weather. Not long after, we saw the first wooden cross. If it was not for the poles we would have turned around at that moment since the next cross was hidden under the heavy fog.

Walking next to the stream was initially easy but soon the soil became boggy along the way and the mud covered our boots to the ankle in places. Sheep, grass and mud. Welcome to Ireland! 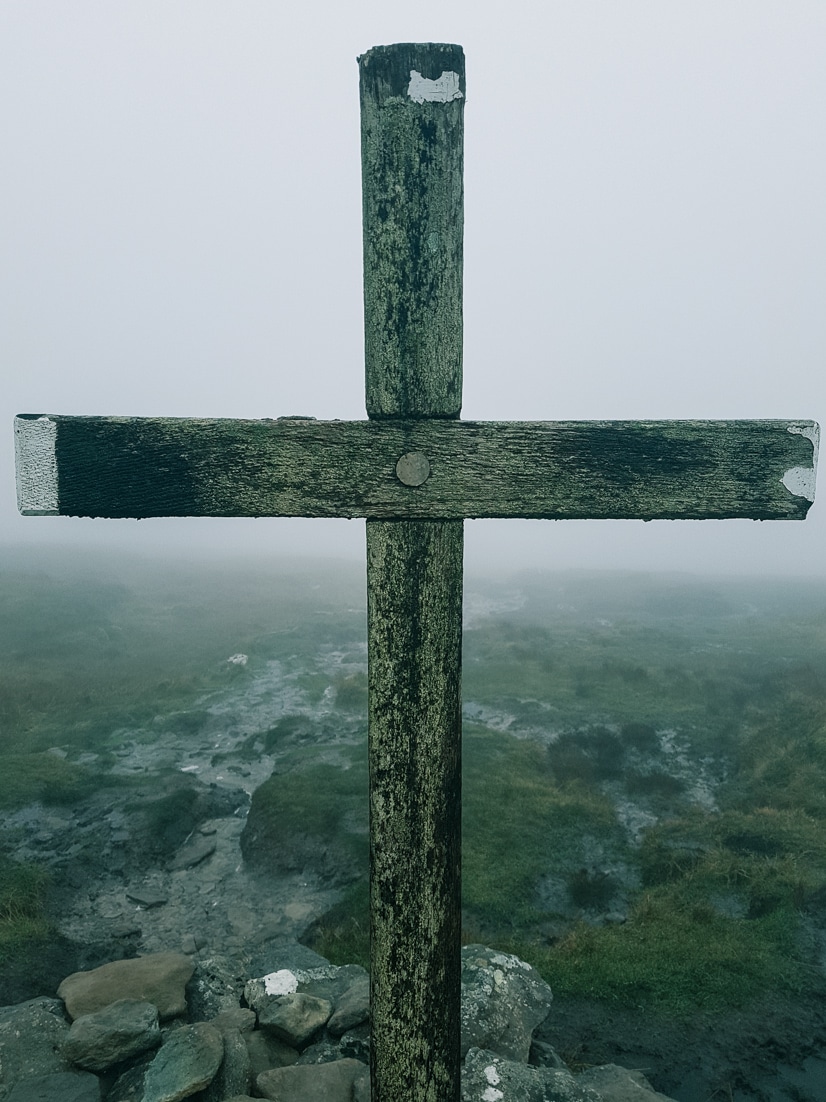 It didn’t look good but we agreed that as long as we could see the next pole we would keep climbing to the peak which was a couple of hours away. After about fifty minutes we had a little break for tea. The weather was cold and miserable but we were ok as long as we kept moving.

Veronika was wearing her Irish outfit today. A green rain jacket and a green backpack covered by a green rain cover. She looked like an elf jumping from rock to rock trying to avoid the mud and the streams of water coming down the slopes.

The wind was picking up but still we pushed on. After the fifth cross the terrain became more steep and the rain more intense. Fortunately the wind was blowing from behind but that meant that it would be on hour faces on the way down.

To make things even worst, the water found its way in my pants and slowly inside my boots. We couldn’t see more than a pole ahead anymore but hoped that the weather would calm down or at least stay as it was. It didn’t. At some point it felt like a storm was raging on our backs and the visibility deteriorated even further but we didn’t want to give up yet.

Water was stealing our body warmth in conjunction with the strong winds. We talked about what we would do and agreed to climb over the next slope and see how thinks were looking from there. If the conditions remained as they were, we would turn back.

Indeed after that slope was the seventh cross but the winds were even fiercer now, and being less than an hour from the top we decided that it wasn’t safe anymore and that the time to go back was finally there.

Were we upset? Definitely not. We gave our best shot but the mountain had other plans that day. Every mountain, even a relative easy one like Mount Brandon has to be respected. We could probably carry on to the summit like that, but what if the weather had gotten even worst? What if the visibility dropped to a few meters and we were pinned up there? Hypothermia is always around the corner especially when you stop moving. 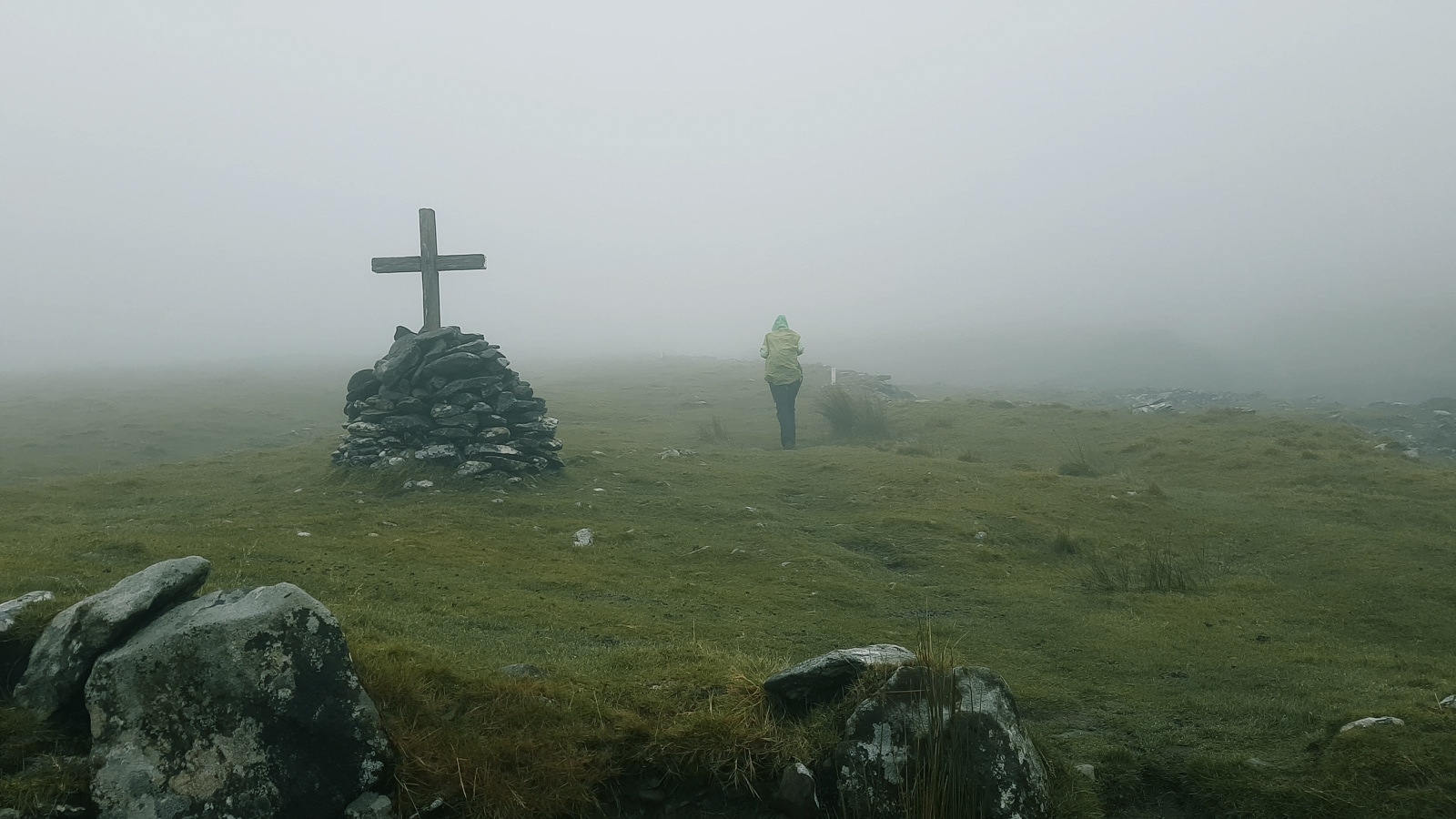 One of my worries when I write about hikes, climbs and general outdoor activities is that I might make them look easier than they actually are. It all looks peachy when we shoot pictures but truth to be told, on our hardest moments the last think we feel like doing is shoot a video of each other gasping for air or stopping every few meters because our leg muscles can’t cope with that steep uphill after having climbed a vertical kilometer already.

So even if a climb is not finished it can still be a successful climb. We took it as far as possible without putting ourselves in danger and we still had lots of fun even though we didn’t step on the top. There will be hundreds of hikes and mountain climbs in the future. Why risk it all for one climb?

var OneSignal = OneSignal || [];
/* This example assumes you've already initialized OneSignal */
OneSignal.push(function() {
// If we're on an unsupported browser, do nothing
if (!OneSignal.isPushNotificationsSupported()) {
return;
}
OneSignal.isPushNotificationsEnabled(function(isEnabled) {
if (isEnabled) {
// The user is subscribed to notifications
// Don't show anything
} else {
document.getElementById("subscribe-link").addEventListener('click', subscribe);
document.getElementById("subscribe-link").style.display = '';
}
});
});