It was pitch–dark and I could only hear the intense activity that took place in the refuge. Time was half past six and most people were already up, getting dressed and fixing their equipment. Me and Veronika were the last ones as usual. The majority would cross Mt. Tymfi and get down to Tsepelovo from the southeast.  The weather was clear at the moment but we knew that it was about to change. We had to reach Megas lakos gorge before it hit us, so naturally everybody was in a hurry.

After a small breakfast, we said farewell to Giorgos and got out, half an hour after everybody else . The wind was blowing with a furry but we were not worried. As soon as we descended below the ridge, it was gone. We followed the path down to Tsoumani pond as we did the previous day on the way to Dragon lake, but this time we turned right before getting there and started climbing to the ridge at the southeast between the peaks Gamila and Astraka.

After that it was mostly flat with the exception of a few small hills. There were marks and signposts with a red triangle on, every few meters but I could see that if the place got foggy we could easily miss the trail by a few meters to the left or right. Low visibility on flat terrain can be disastrous.

Of course there was no phone signal out there but I had downloaded Zagori on google maps just in case. It’s a great safety net and many people don’t know that you can use it offline. I also had a paper map from a company called Anavasi which is the best map for the region and you can find it almost everywhere in Zagori.

We walked past some small ponds used for watering livestock and finally, an hour and ten minutes after we left the refuge, we were in front of Rombozi pond which is more like a small artificial lake. It was foggy and we couldn’t see the shore opposite but still we had plenty of visibility. It had an atmospheric Hitchcockian kind of ambient.

We crossed, walking on top of the small wall that acts as a dam. Ten minutes later, we got out of the mist. The terrain became rough and at some point, just before reaching Megas Lakos gorge, er found a small cattle herd grazing the grass around the trail. Some of them run away as soon as they spotted us but the rest (the big ones) stayed put, looking at as. They were not hostile but probably they weren’t used to people either. Veronika just walked between them saying “Ahoy” which means hello in Slovak. They didn’t seem to share her enthusiasm but let us pass without causing any trouble. 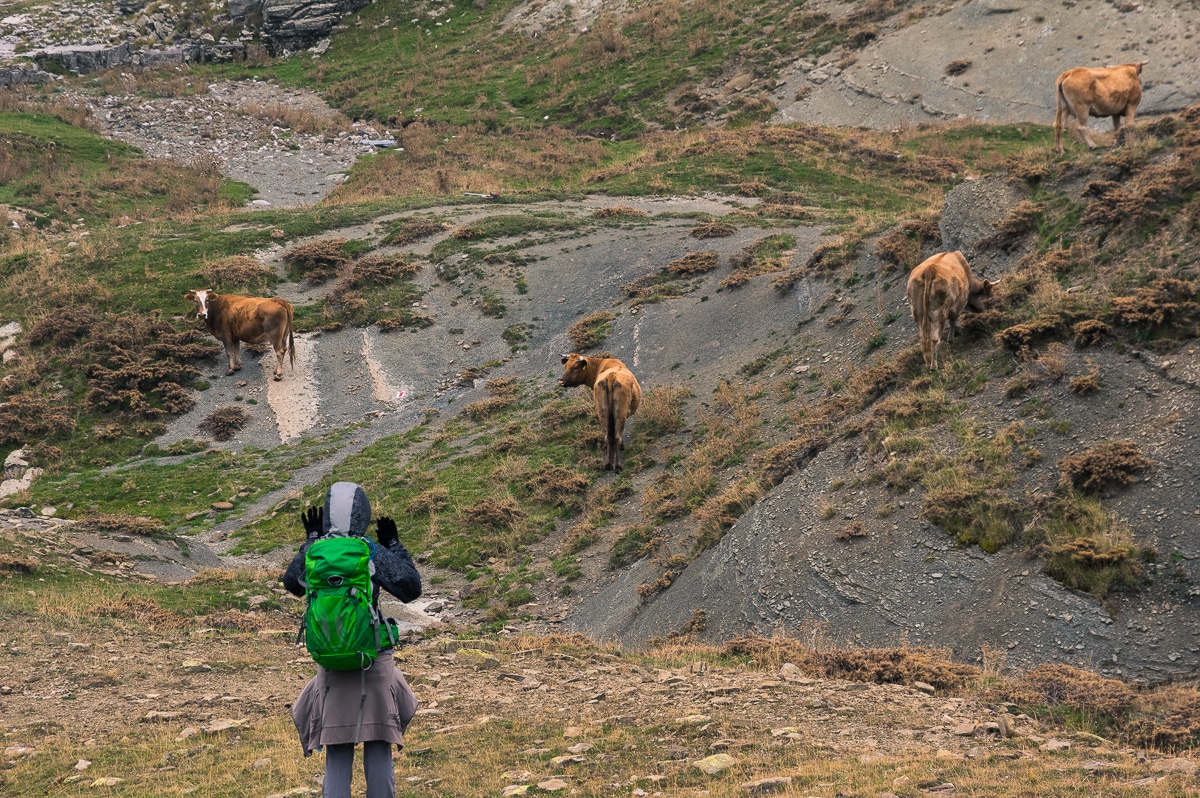 We come in peace

Finally we reached the gorge of Megas Lakos. The “great pit” as it translates in Greek, starts as a shallow gorge at the heart of Tymfi and ends up on Vikos, measuring more than six hundred meters in depth. We hiked on its right side for an hour and it was there that we felt the first drops coming down on us. We descended to its bottom and crossed to the left side which we kept for one more hour until we found a trail to the left leading outside the gorge towards Tsepelovo. That split is five hundred meters after a water tap and you can confirm you are on the right spot if you can see some big cavities on the limestone hills to your left that look like caves. 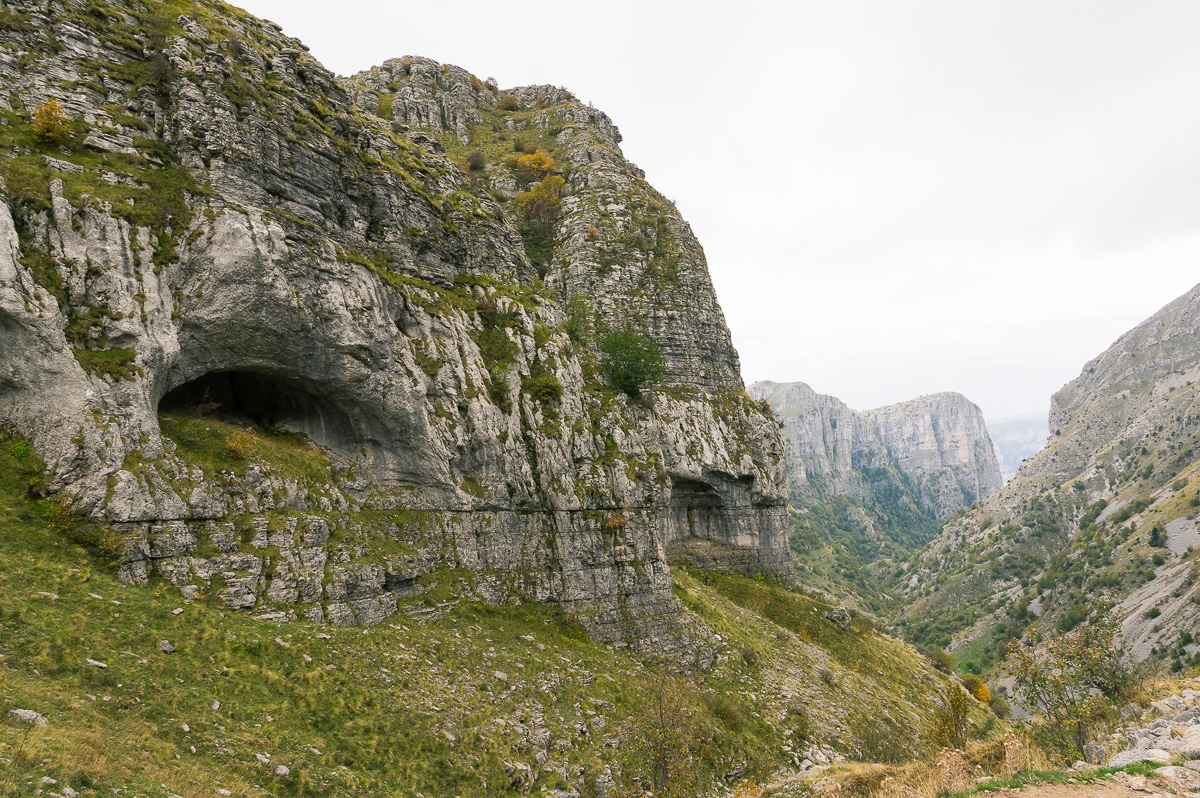 In the meantime the drops turned into proper rain. We put on rain coats and covers on the backpacks and kept going.

After turning left there, the path took us through an old limestone mining site and a few moments after, we saw Tsepelovo on our right, at the bottom of the valley. I confess that we got lost there for half an hour looking for the trail because I rushed to turn right towards the village immediately. I should have waited a bit more to find the blue marks of the next trail which to my defense were much older and less dense than the red ones that we were relying on so far. Fortunately after a short phone call to our guide and with Veronika taking the lead, we eventually spotted the marks further down the hill.

The rain showed no signs of stopping. This downhill trail is mostly used by animals and it was rough and slippery. After an hour and a half it widened and went through the first fields. A sign that we were near the village.

The path became even wider and a pair of grooves started to shape. For the first time we saw salamanders. These little black and yellow animals emerge out of their hideouts during rain and they tend to freeze when somebody gets near, making them easy to shoot with a camera from a close distance. 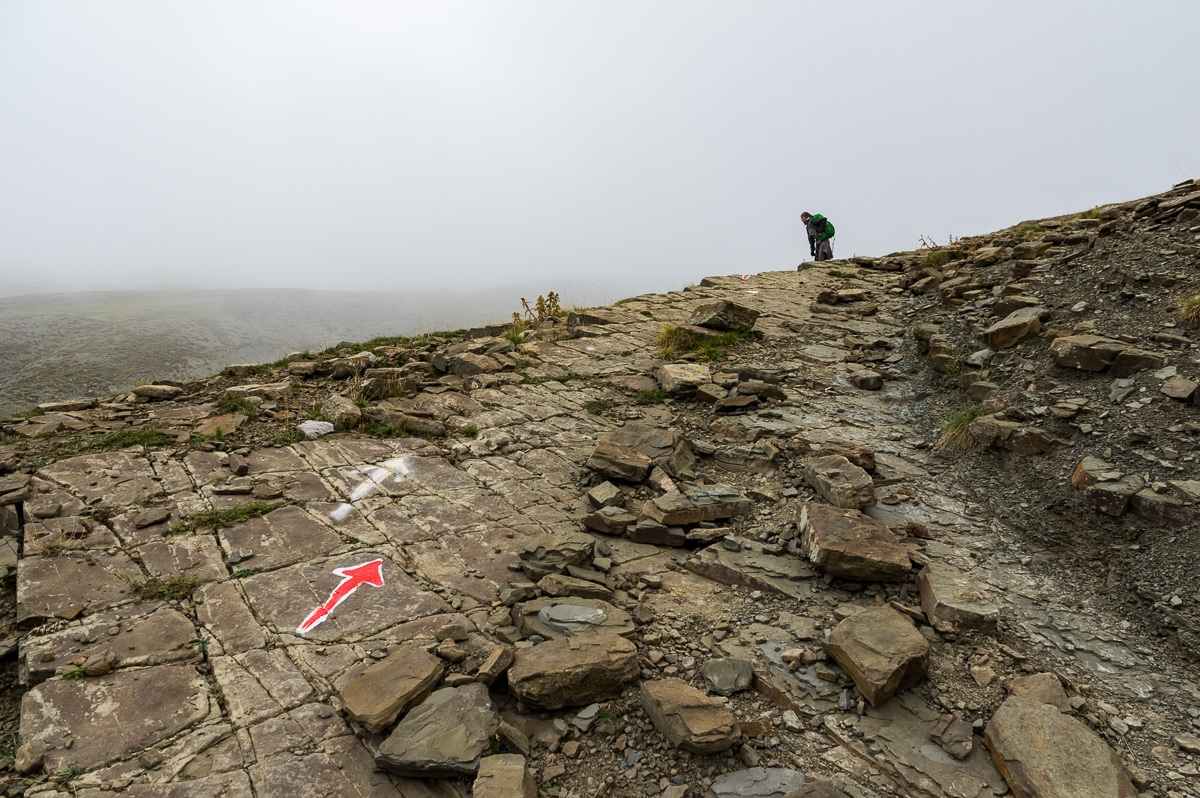 The trail eventually turned into a dirt road and soon we were outside the first building which was an old church. A farmer who was there loading a truck waved and smiled. We must have been quite a sight with our raincoats, hoods and covers coming down from a mountain under rain for the past three hours.

Tsepelovo is built at a thousand meters altitude and is the biggest village of Zagori with around three hundred people. Even though it is considered crowded for Zagorisian standards, we didn’t see a soul while walking the paved roads on our way to its central square and the classic plane tree. Truth to be told nobody would be out with this rain unless they had to. Like Nikos who was there waiting and smiling. We were pretty happy to see him too, after all this rain and mud. He drove us to Kamares Hotel which was less than two minutes away. 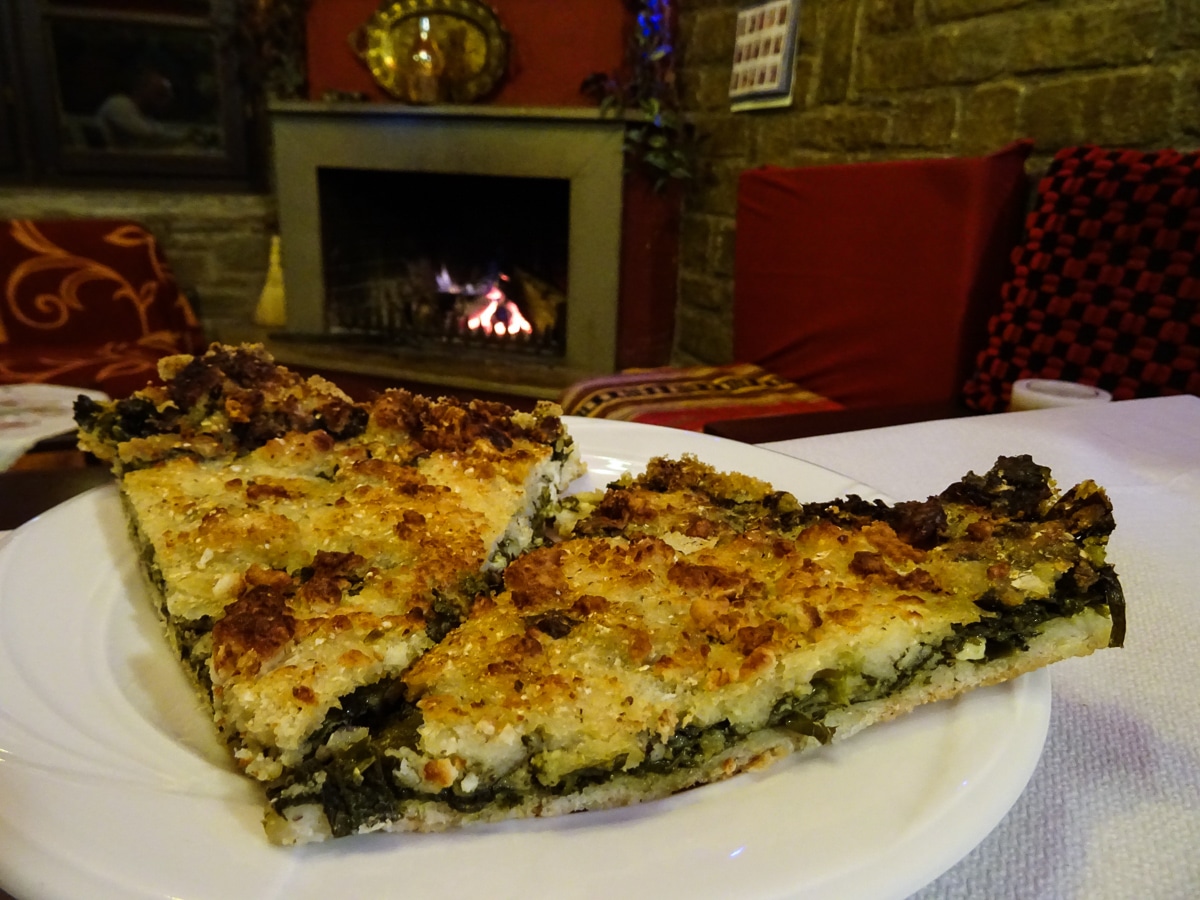 Jenny and Costas—the owners, greeted us and took us straight to our room where the fireplace was already lit. We removed our wet clothes and boots, put them to dry and had a quick shower to wash the tiredness off. After that, we went downstairs to the dining room where Jenny had set a traditional welcoming table with small plates and of course Tsipouro which worked wonders after a long cold wet hike. Jenny also works at Rizarios school for girls at Monodentri, a renowned and very old school for hand crafts. She offered to show us around when we would be back to Monodentri and we gladly accepted. Costas, her husband additionally raises sheep. He told us how they managed to build the hotel and about the pleasures and difficulties that come with living in such a wonderful but isolated place. His feta cheese was top of the line and so was Jenny’s cooking. Her stifado (stew with beef and onions) and batsaria (pie made of greens) were epic.

Next Day : The Viewpoint 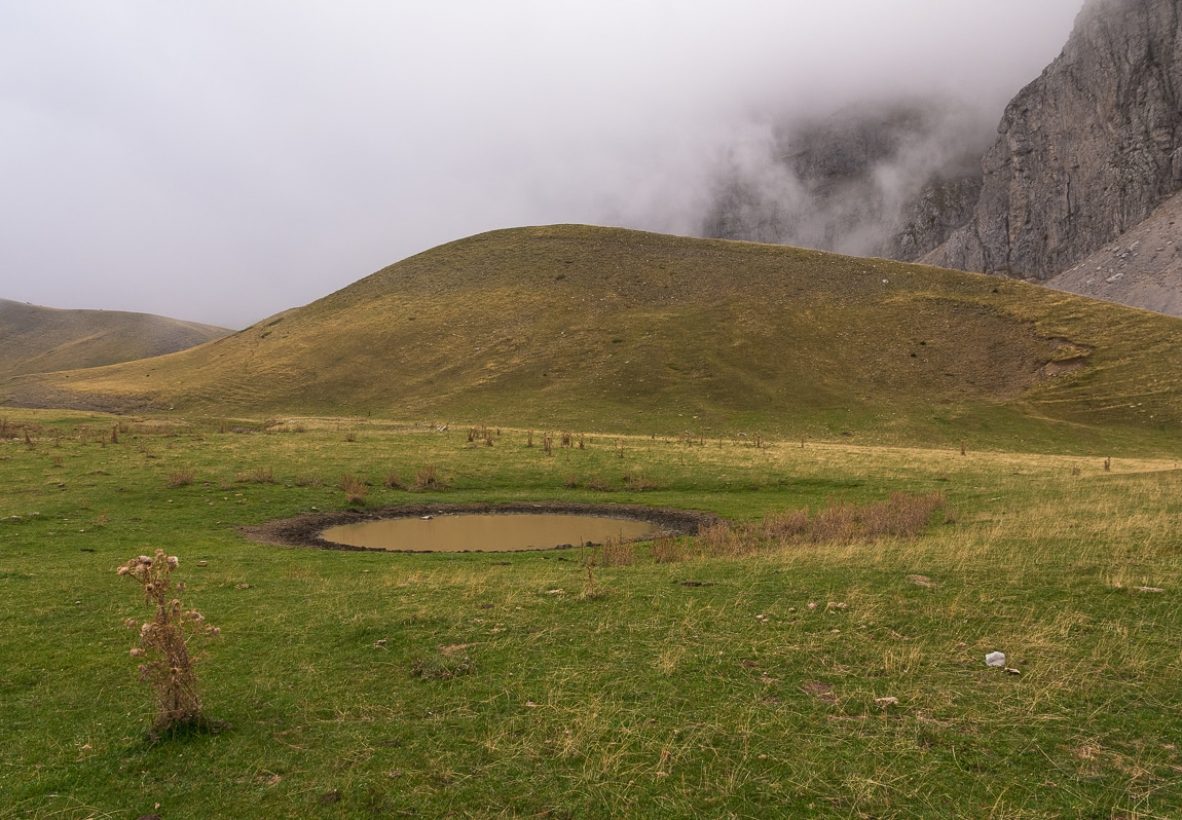 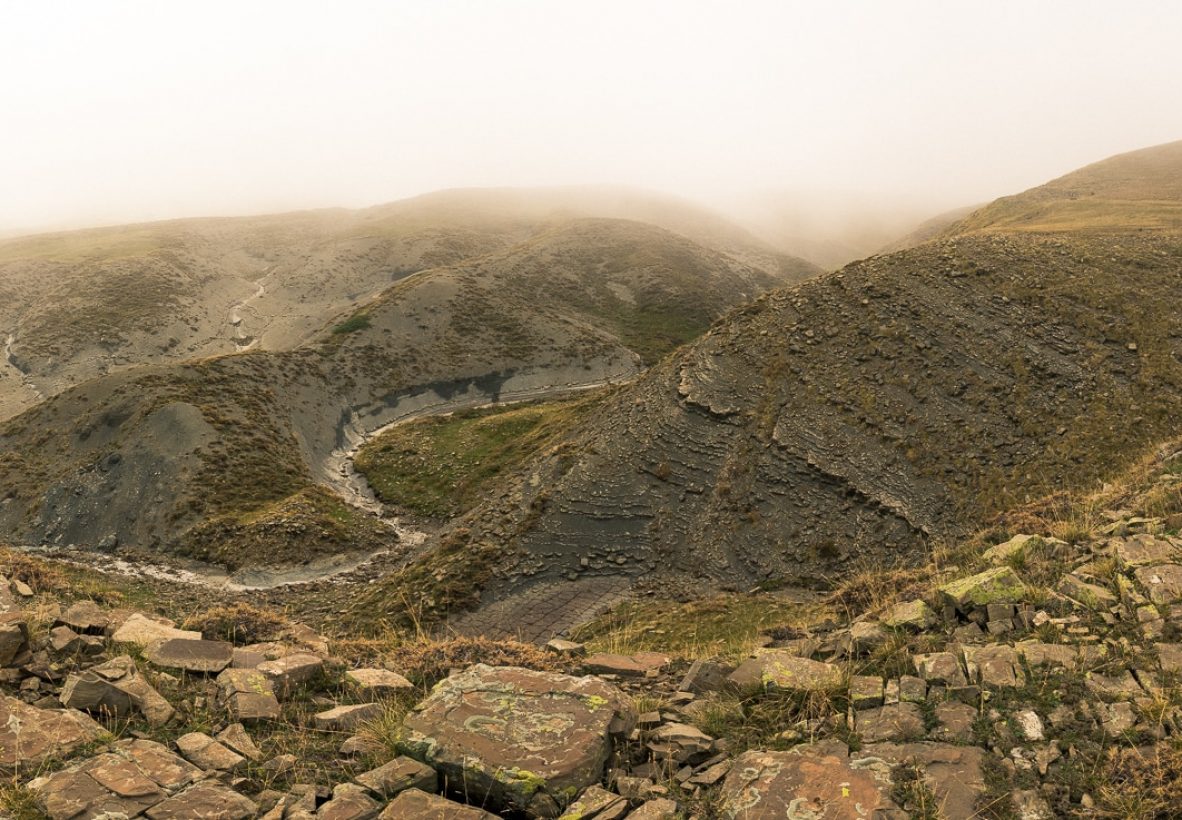 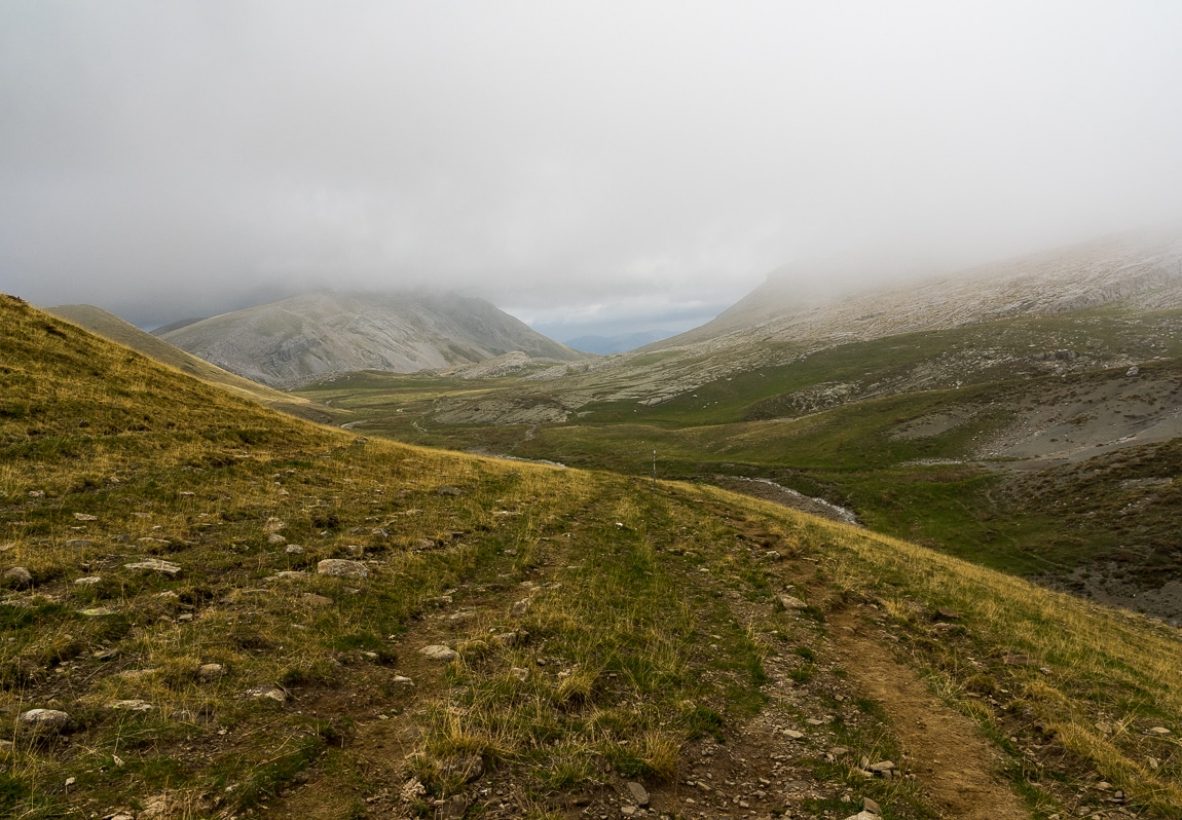 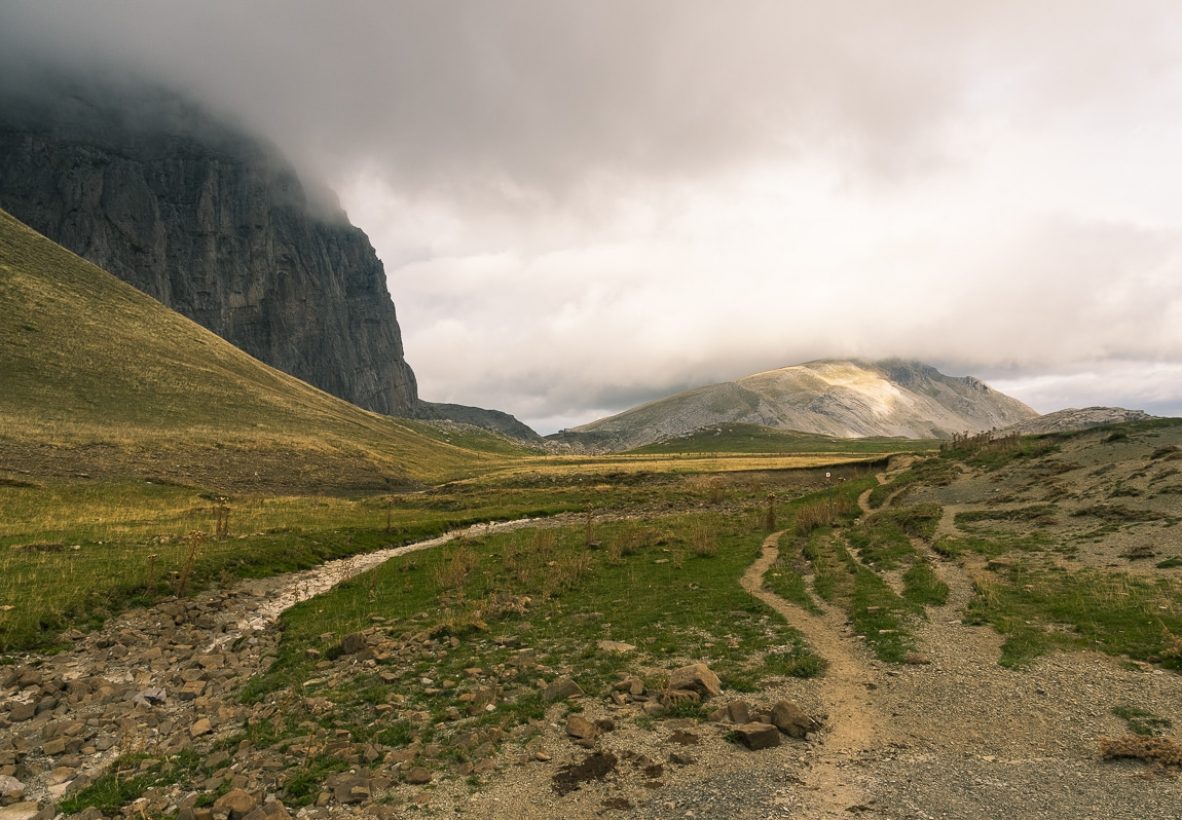 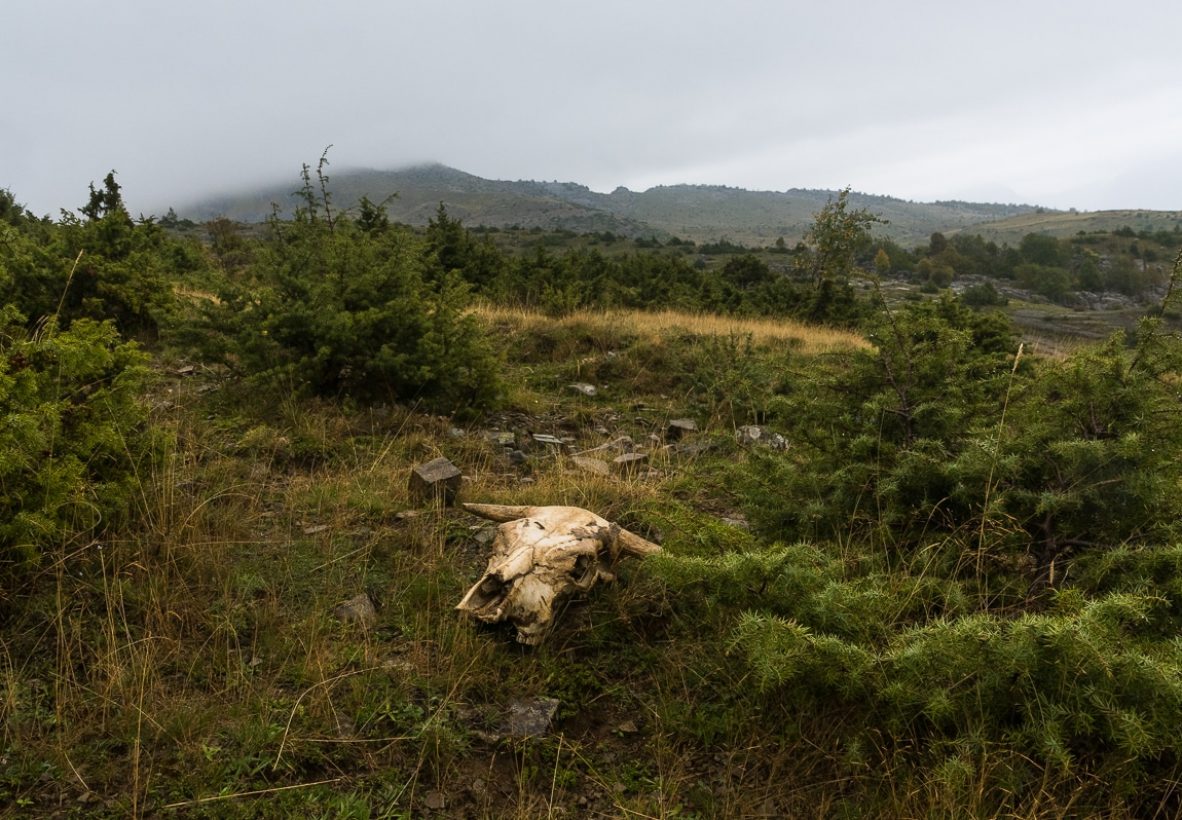 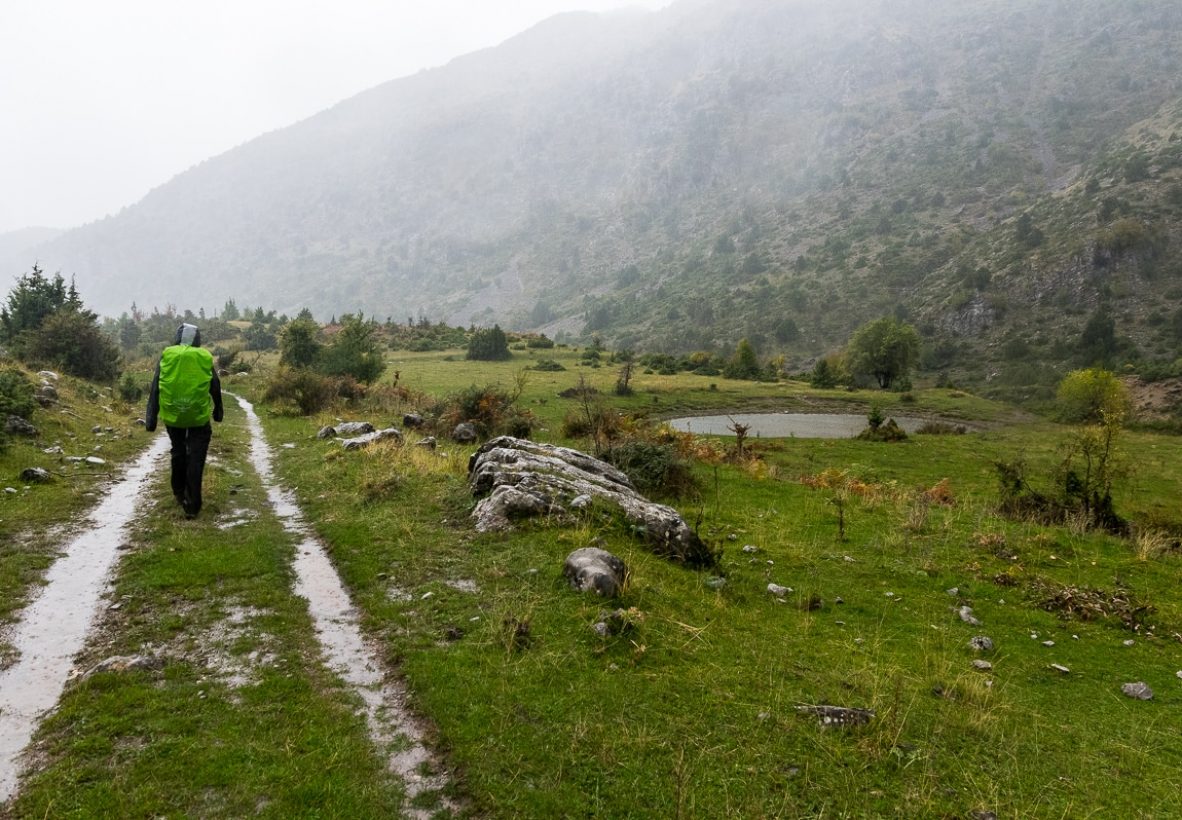 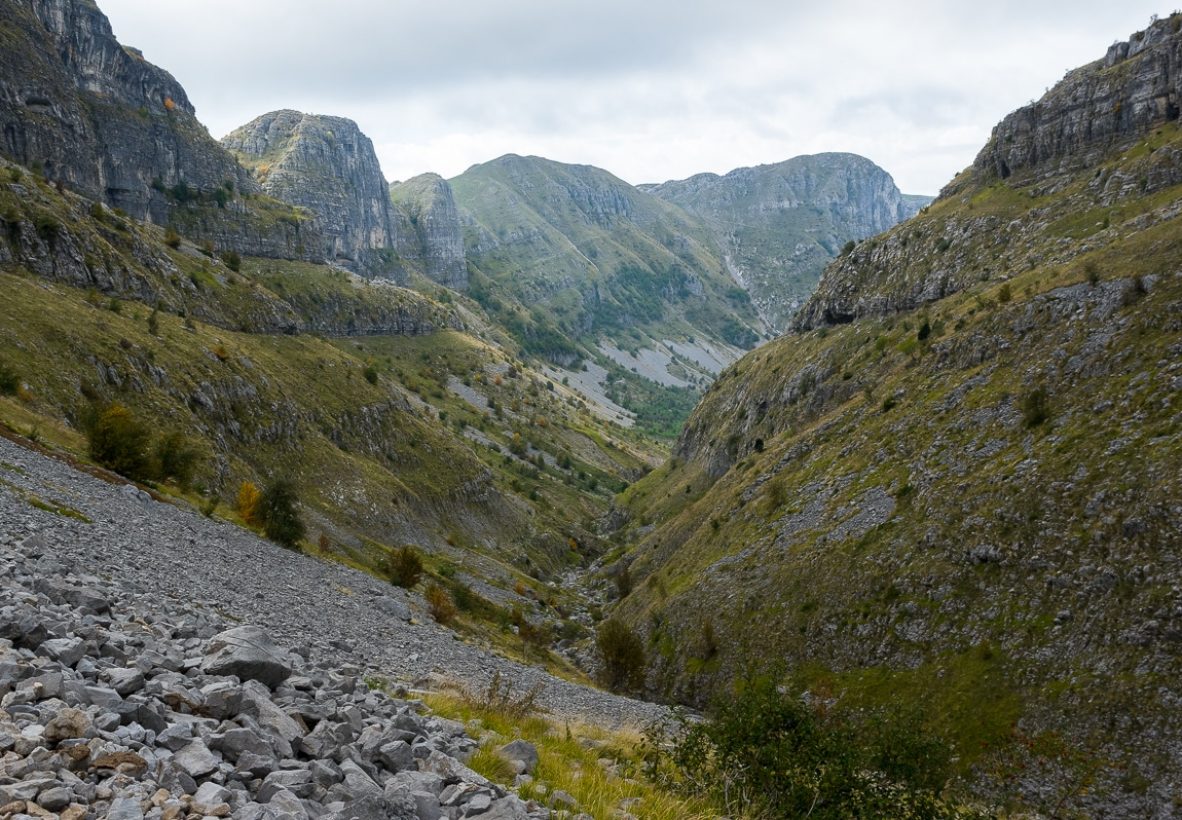 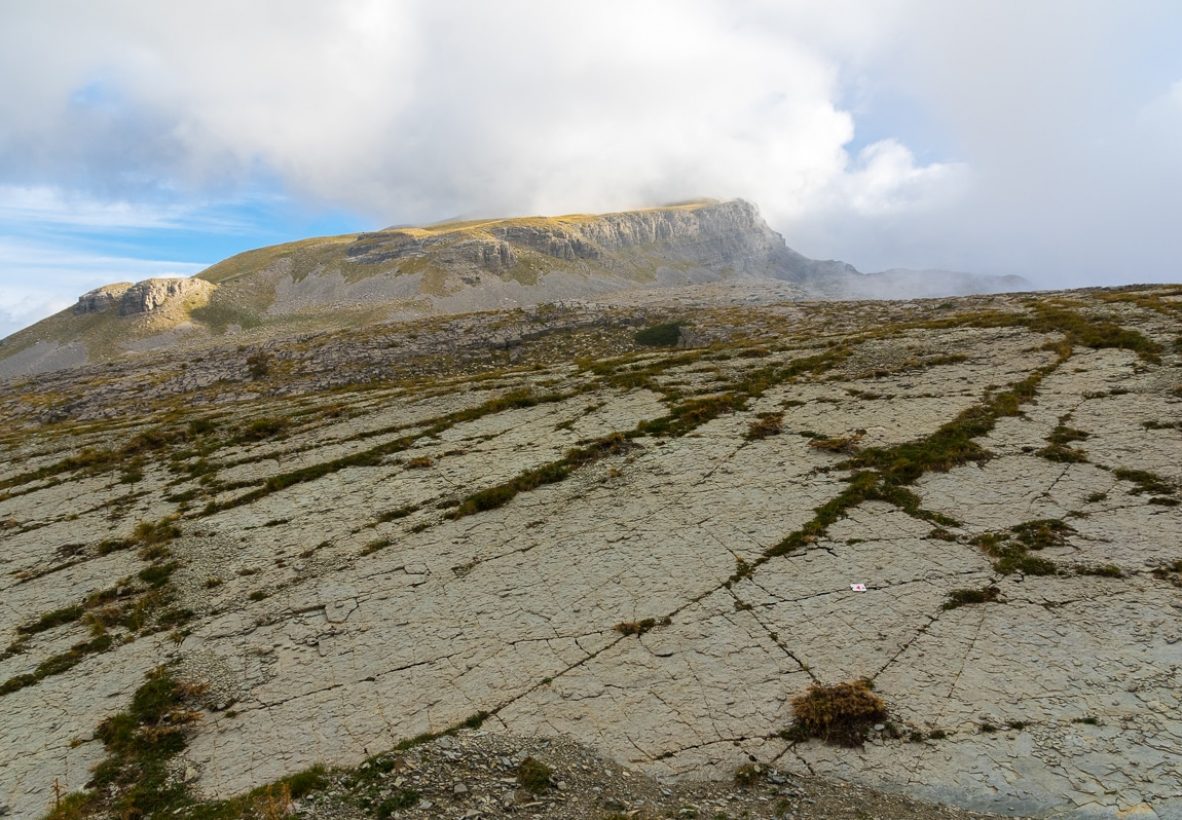 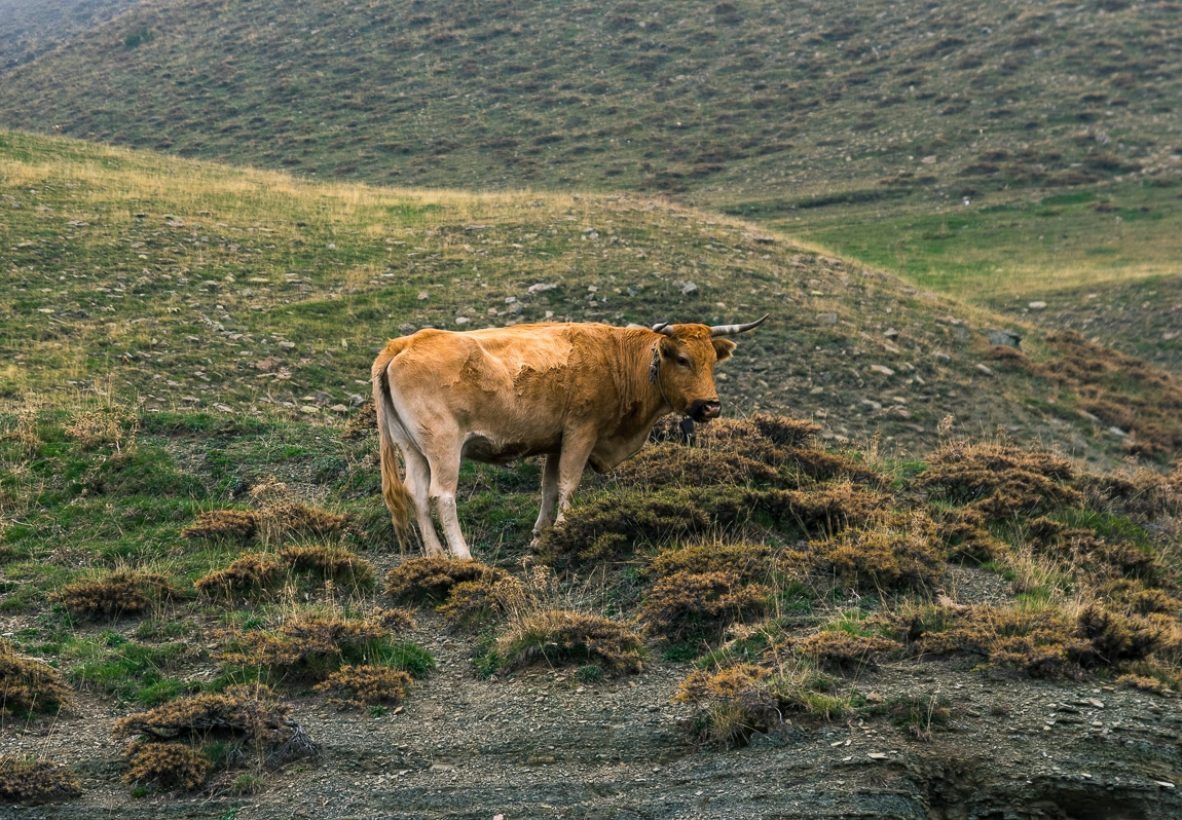 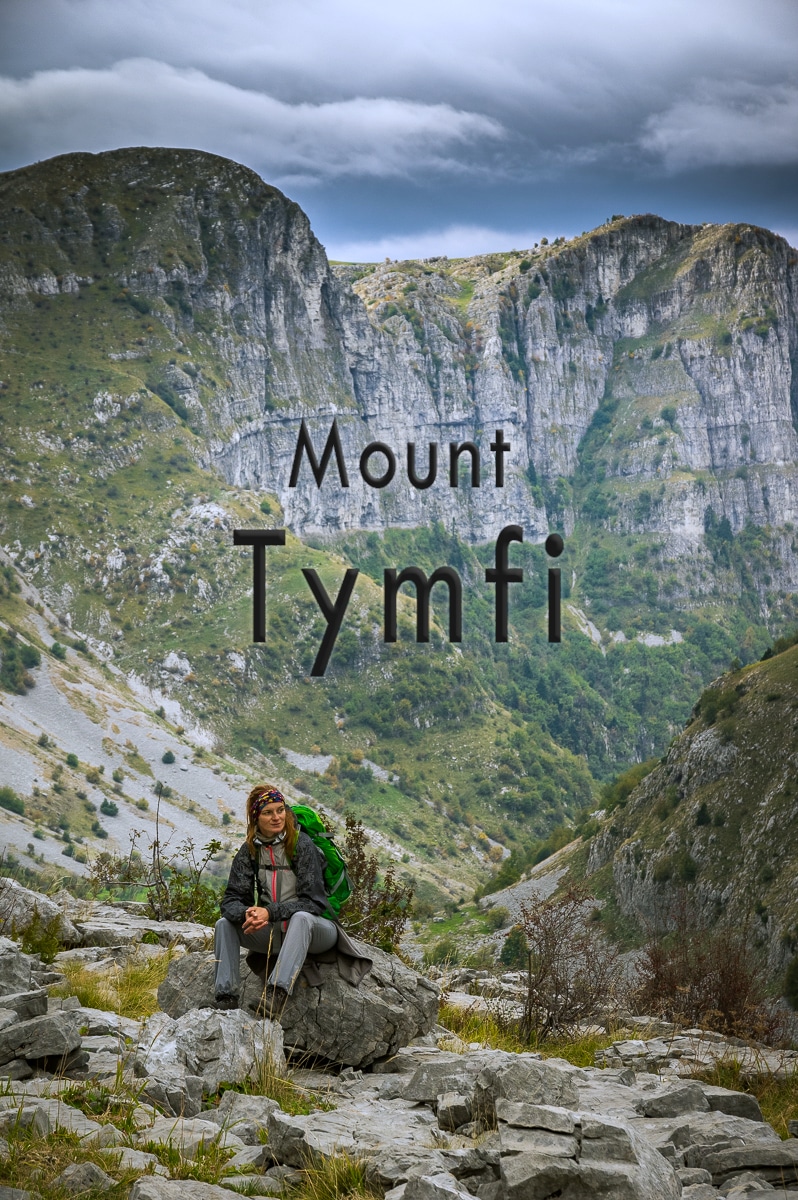