Hiking Vikos gorge under rain is treacherous because of the rock falls. So naturally the first thing I did when I woke up was to open the door and get on the small balcony. To my relief there were only a few small clouds here and there. “Good start”. The plan was to hike from Monodendri to Vikos village through the gorge; a perfect warm up for our seven day hiking trip.

Have you read our Hiking Guide? If not, take a look!

The trail starts with a 300m descend from Monodentri to the bottom of the gorge. From there, it gently descends, for most of its length, until it reaches the only uphill of the day, outside Vikos village which is located 250 meters higher. Our guide would wait there to transport us to Aristi for the night.

We checked our gear one last time, put the backpacks on, and headed to the central square. There, we turned left towards the church and kept walking until we left Monodentri behind. The trail started zigzagging downhill between the trees and at some points it was steep and a bit exposed, so we had to be extra careful.

Forty minutes later, we reached the river. Voidomatis’ bed was dry and pebbled. It hadn’t rained for days and the water from the spring didn’t have enough flow to reach that far. The trees were mostly green but yellow tones had started to show on the edges. It was the middle of autumn.

Vikos trail stays on the left bank of Voidomatis for its whole length and is part of the greater O3 national mountain trail which starts at the lake of Ioannina and finishes at Mt. Gramos.

Vikos is the world’s deepest gorge in proportion to its width. Its soaring walls make you feel humble—a tiny spot in the gorge’s belly.

The route is straightforward except for a bit of rock climbing at one point, but ladders and ropes were there to make it easy. The weather was sunny and the alternation of clearings and dense forest kept us cool. My mind had already started to clear from everyday stress and worries as the narrow path was leading us through the forest, turning slightly here and there to avoid a big old tree or a mossy rock. We felt we were in a microcosm, isolated from the rest of the world.

Vikos gorge is a natural paradise. 1800 species of flora can be found in the greater area making the place a rare ecosystem. Many natural healers used to handpick herbs for their medicines around here between the 18th and 19th century. They were renowned all over Balkans and Asia Minor, and were called vikogiatri (Vikos’ doctors).

Just before the middle of the hike, we came across another gorge called Megas Lakos (great pit) which starts at the highlands of Mt Tymfi and ends up in Vikos. At this exact spot you will find the only source of drinkable water in the Gorge. The location is known as Klima.

Astraka is the third highest peak of Mt. Tymfi. At the joint of the peak’s base and the gorge’s northeast wall, there is a series of huge vertical rock formations called “Towers of Astraka.” As the wall forms a right curve following the base of the peak so do these formations, acting as a spectacular background for one of the most beautiful villages in Zagori— Mikro Papingo.

By the time we reached this geological wonder, we had gotten hungry. Veronika proposed to stop for lunch and I agreed. The day’s menu had fresh bread, cheese, salami, eggplant salad, and local biological tomatoes and cucumbers. We used a big flat rock as table (Nikos had even put a tablecloth in the lunch pack!) and sat under the shade of the trees. It was peaceful. The only thing we could hear was the rustling of the leaves in the breeze. Some of them were leaving their branches falling onto the ground in a slow supple dance. Serenity.

Back to the hike, after fifteen minutes we came across another trail going to the right towards Voidomatis springs and Mikro Papingo. We kept straight and soon the path started to ascend towards Vikos village.

As a result this section provides some very good photographic opportunities. The gorge at that point takes a curve to the right and gets broader. The south east wall provides some spectacular viewpoints to the springs and the church of Panagia (Virgin Mary) but mostly to the gorge itself which now I could shoot from a higher and more central point.

That afternoon was overcast and the sky was mostly covered with clouds. Not the best conditions but not bad either. In travel photography you always work with what you’re given. 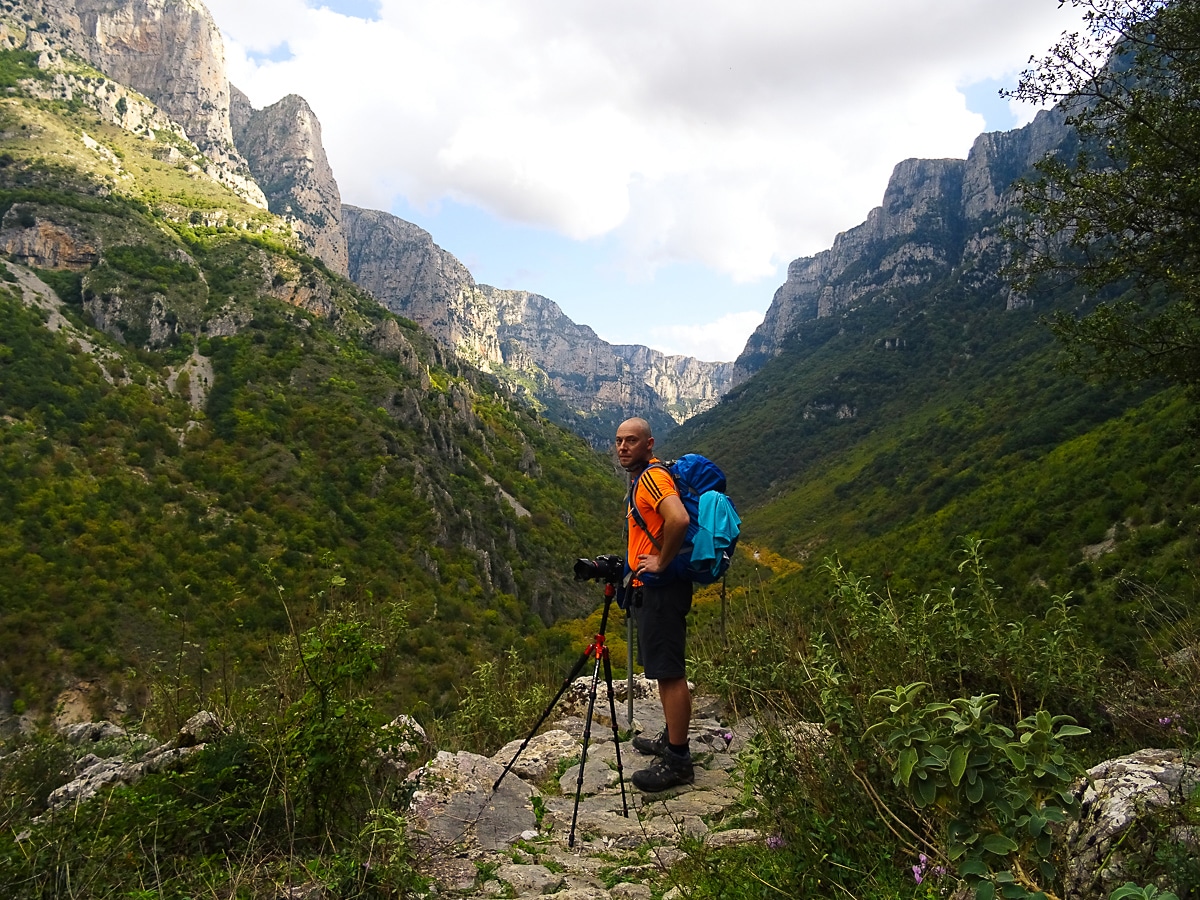 Fortunately, we were ahead of schedule so I took my time setting my tripod on several locations. Normally it takes around forty five minutes to the village from the gorge. It took us an hour and a half, and that with Veronika urging me to move all the time which is probably the story of our lives when hiking.

Nikos was waiting for us at the viewpoint by the end of the trail.

“How was it?” he asked. “It fulfilled our expectations and that’s quite a feat” I answered.” Aristi was less than a five minutes away. It’s a beautiful village built amphitheatrically on a slope.

We sat for a shot of Tsipouro before going to our room. As we watched the sun go down, I was thinking that we didn’t meet more than a dozen of people all day. It was Tuesday and I’m sure that weekends are more crowded, but still, considering that Vikos gorge is the most popular trail in Zagori, and one of the most famous in Greece, it is impressive. Being a part of Vikos-Aoos national parked has helped in keeping the place safe from over-development.

The night before the trail we stayed at Arktouros Hotel in Monodendri. Beautiful mansion with relative small rooms which are very clean and beautiful though. The ceilings are exquisitely painted; Zagorisian architecture at its best. The food was amazing and the small fireplace in our room was the cherry on top. You can book Hotel Arktouros here.

After hiking Vikos, we stayed in another gorgeous place called Zissis Hotel. A nice mansion with a beautiful front yard under a vine. The breakfast was also amazing and even though we spend there just half a day, I can definitely recommend it. You can book here.

The room was big and again it had a fireplace. It is always nice to have the luxury of a hot bath and new clothes after a day’s hike. Our dinner menu that night had trout with green pie and Greek salad. Again everything was homemade and delicious.

After finishing our hearty meal, we didn’t feel very tired so we went to explore Aristi a bit. The night was a moonless and the streets empty…

Next day : The River 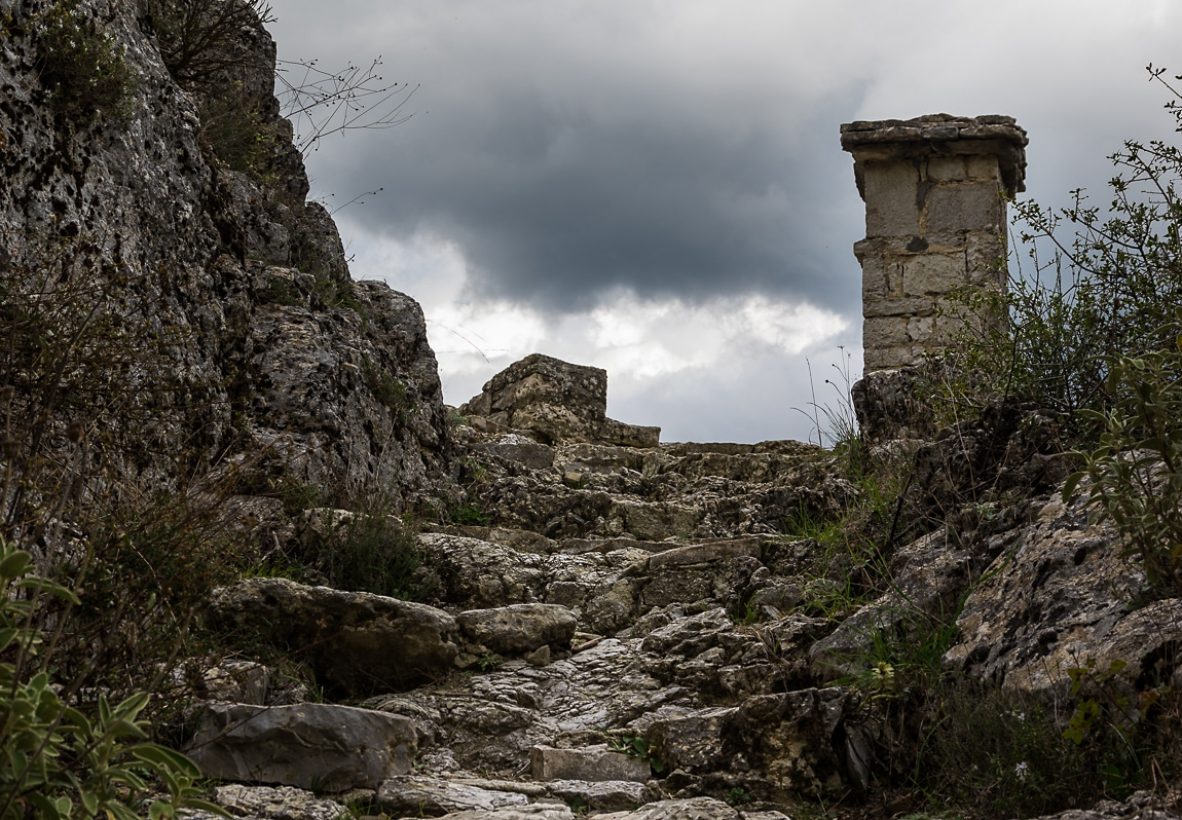 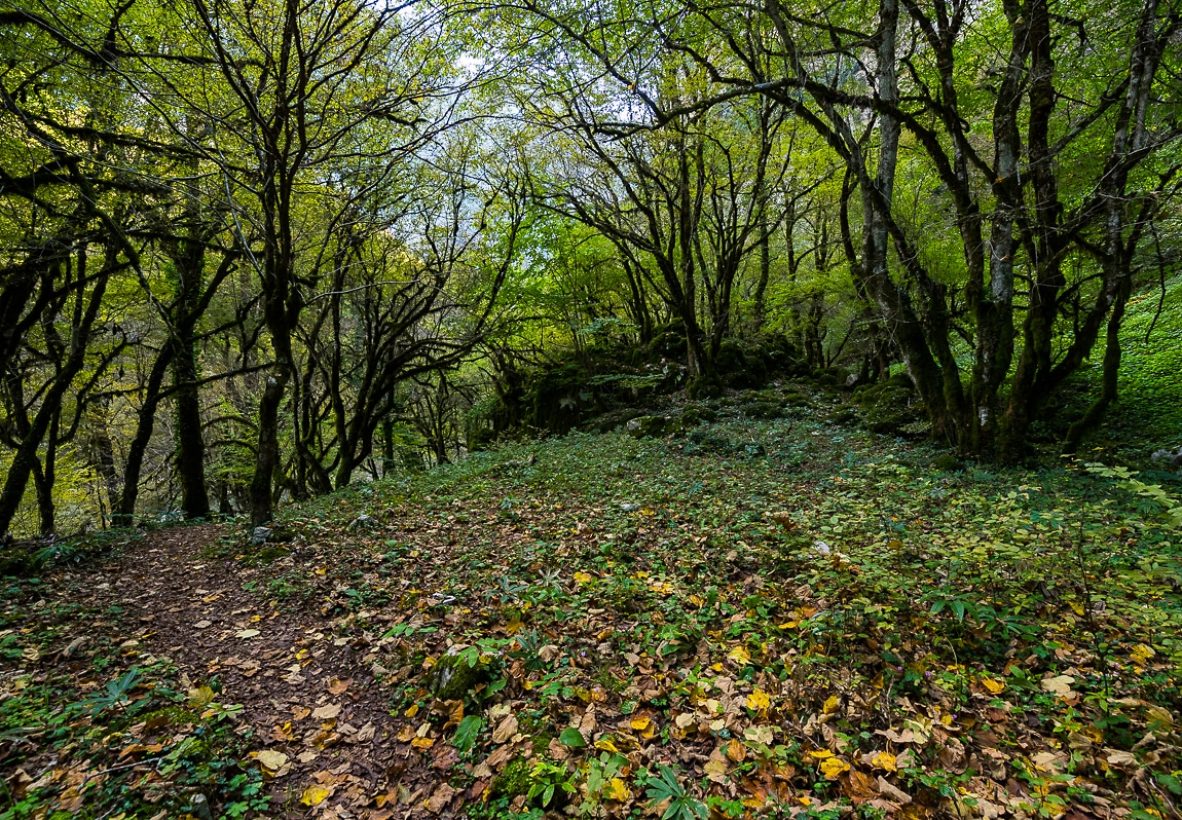 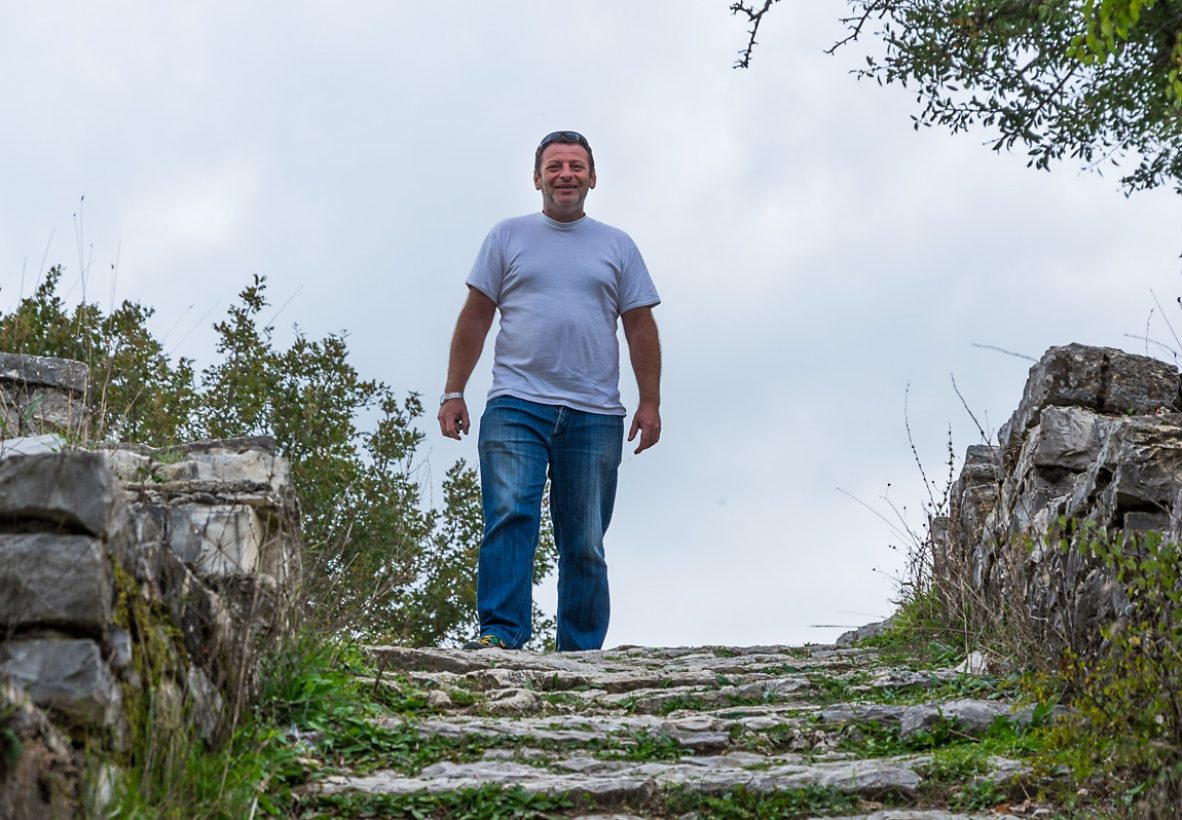 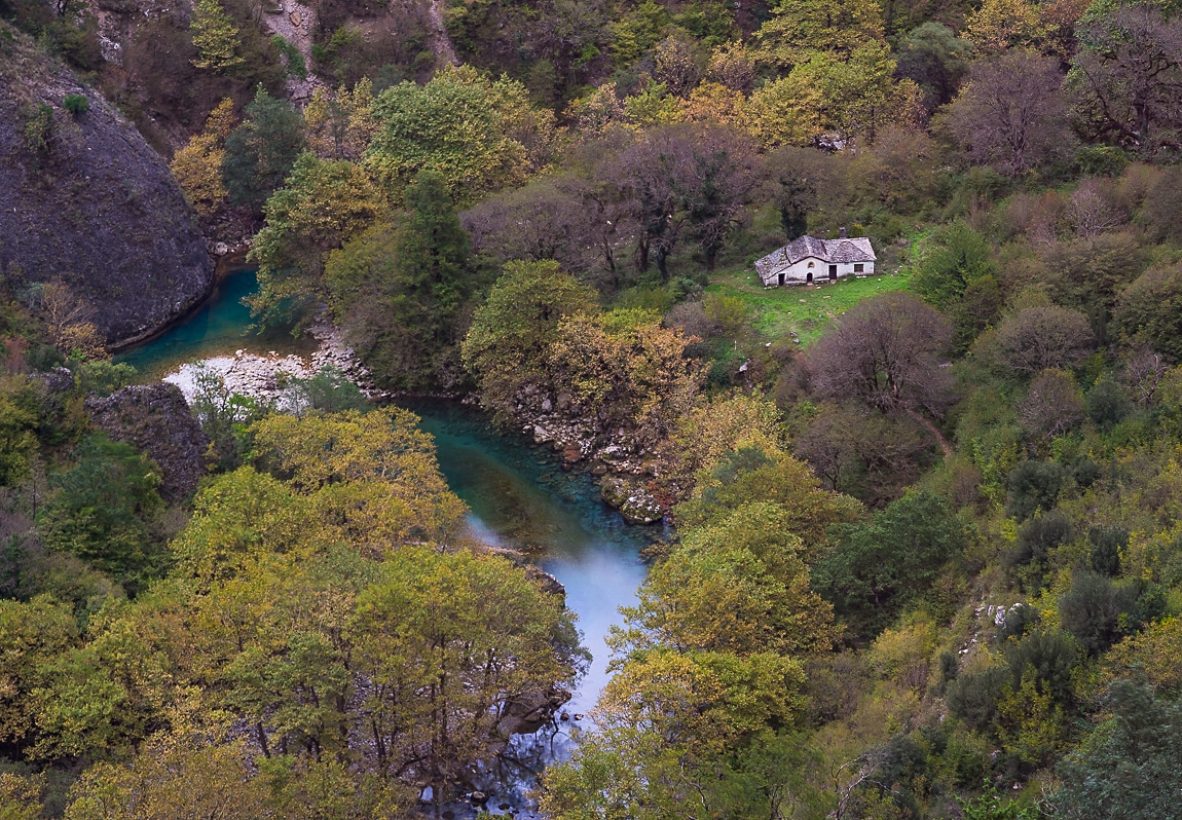 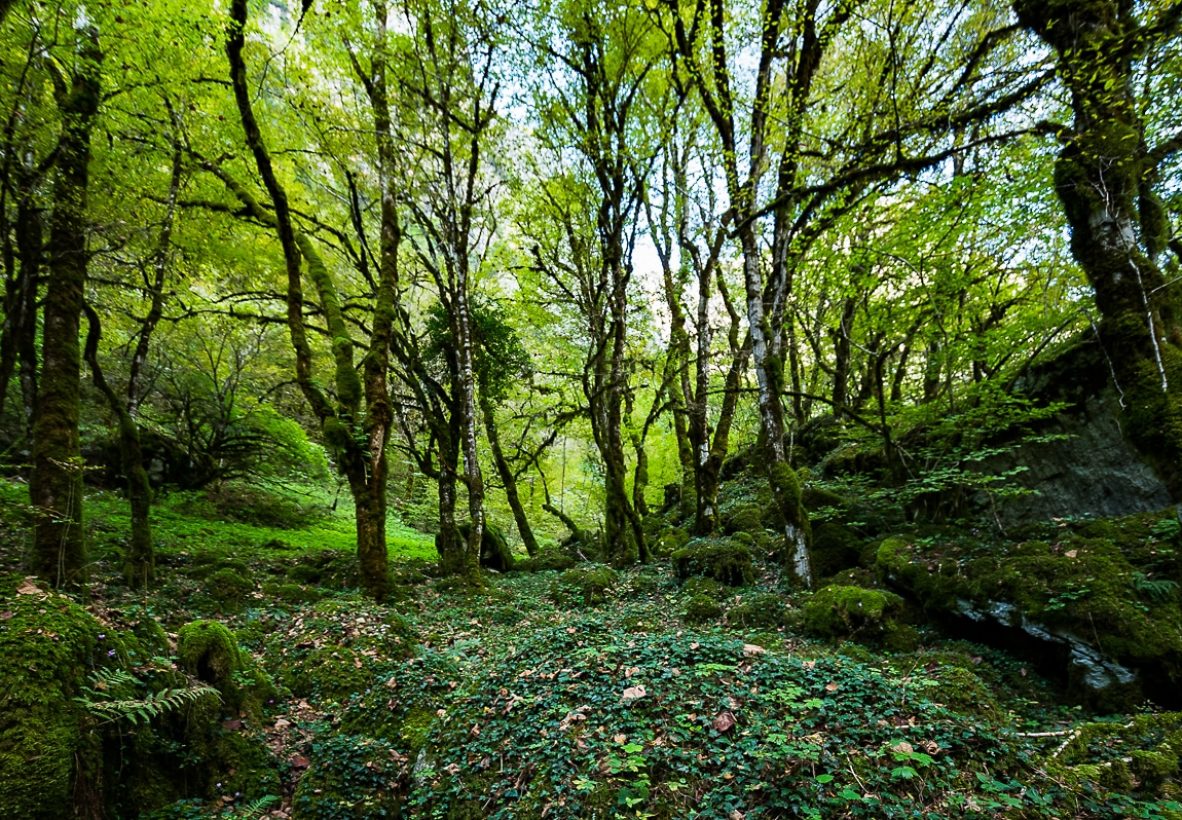 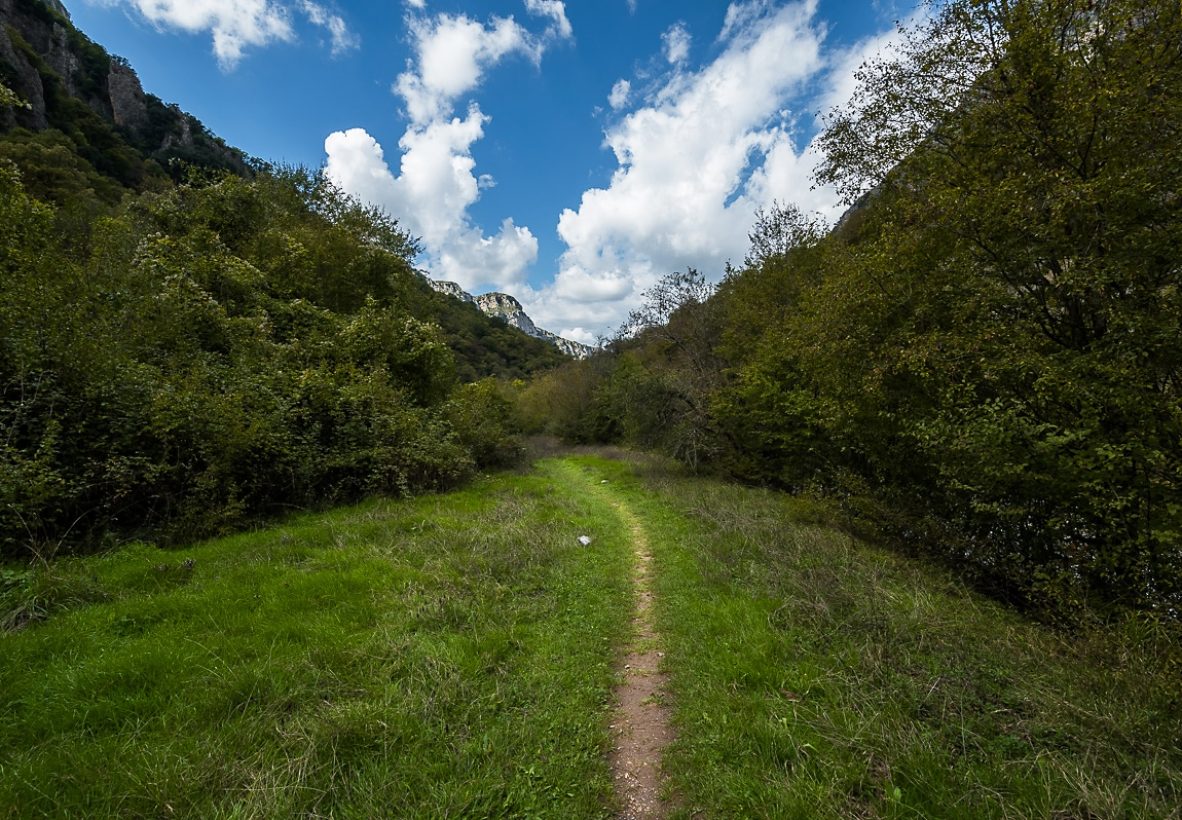 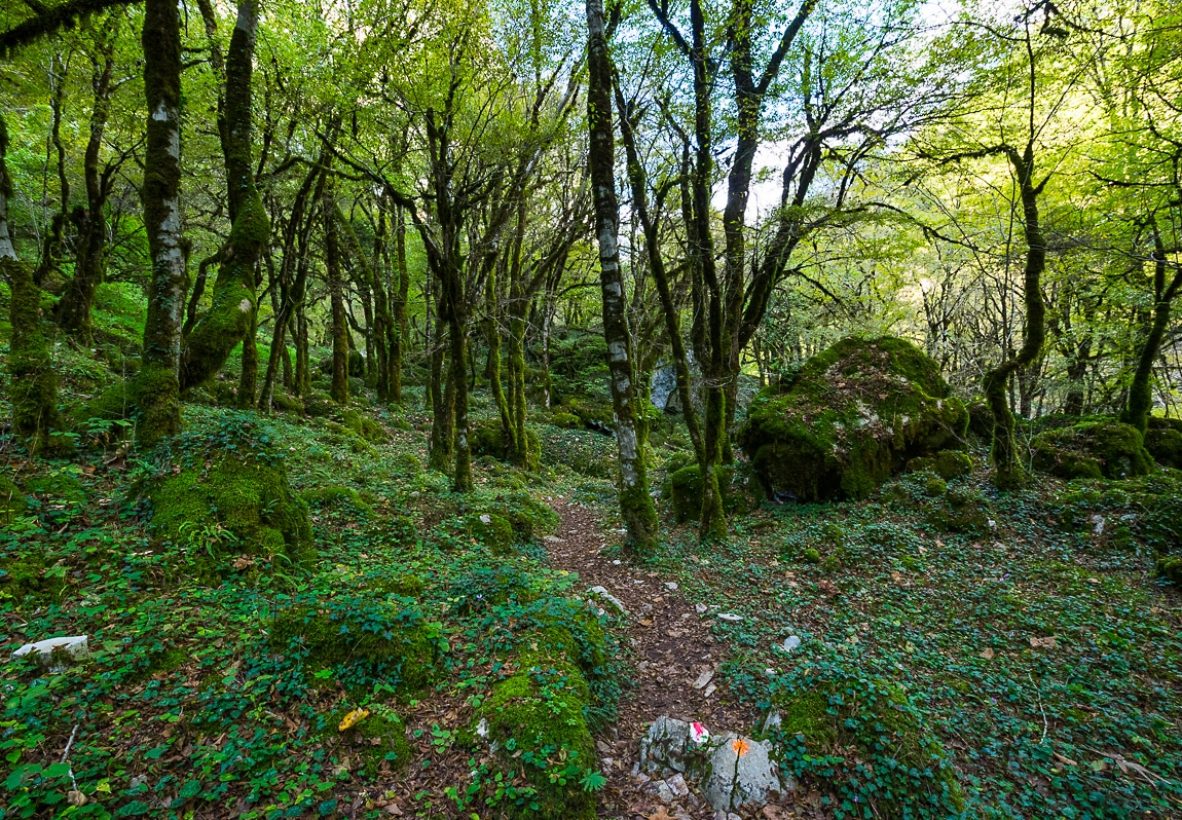 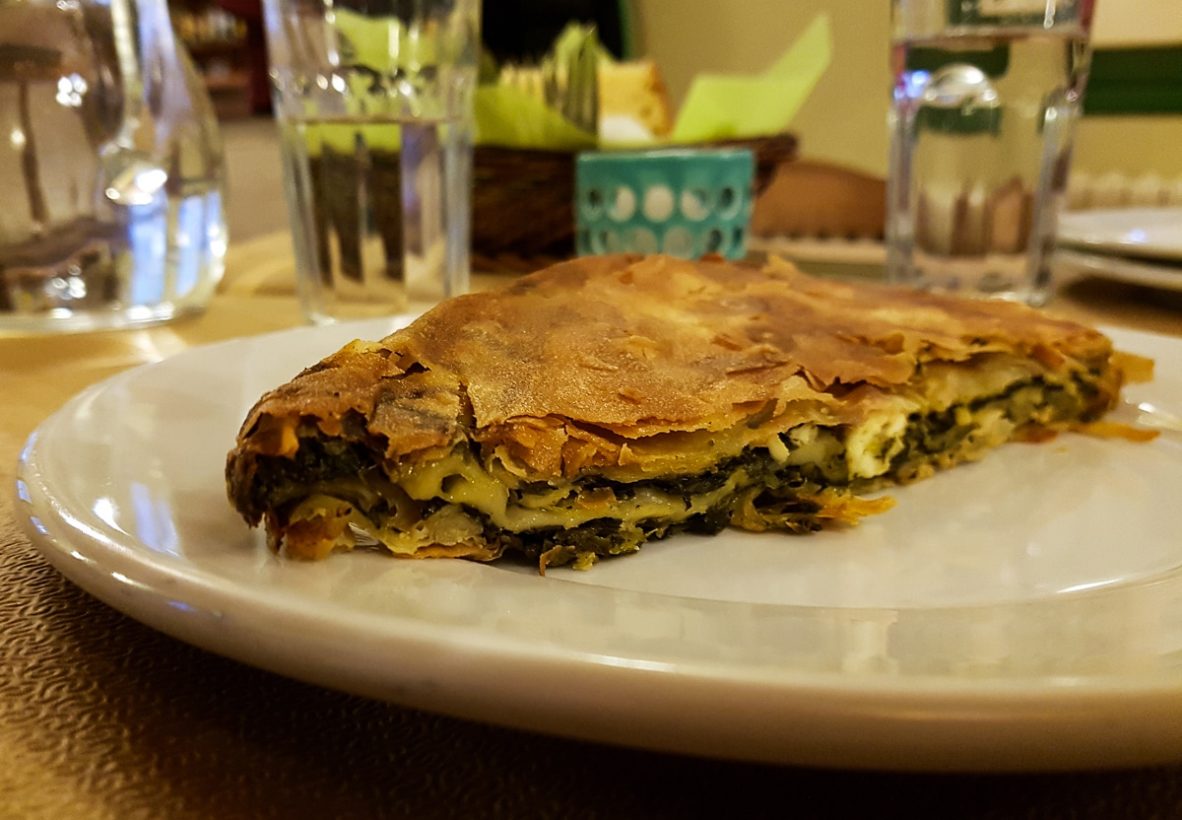