After a good night’s sleep, we woke up in high spirits. The euphoria of the previous day was still on and we couldn’t wait to start our second day in Zagori.

The day’s march would take us back to Voidomatis river and the infamous Kleidonia bridge. From there, we would be driven to the village of Kleidonia and hike to Ano Kleidonia—an old settlement which was abandoned for decades. Finally our path would end up in one of the most popular villages in Zagori—Megalo Papingo. From there, our transfer would take us to Mikro Papingo just across the valley, for the night. 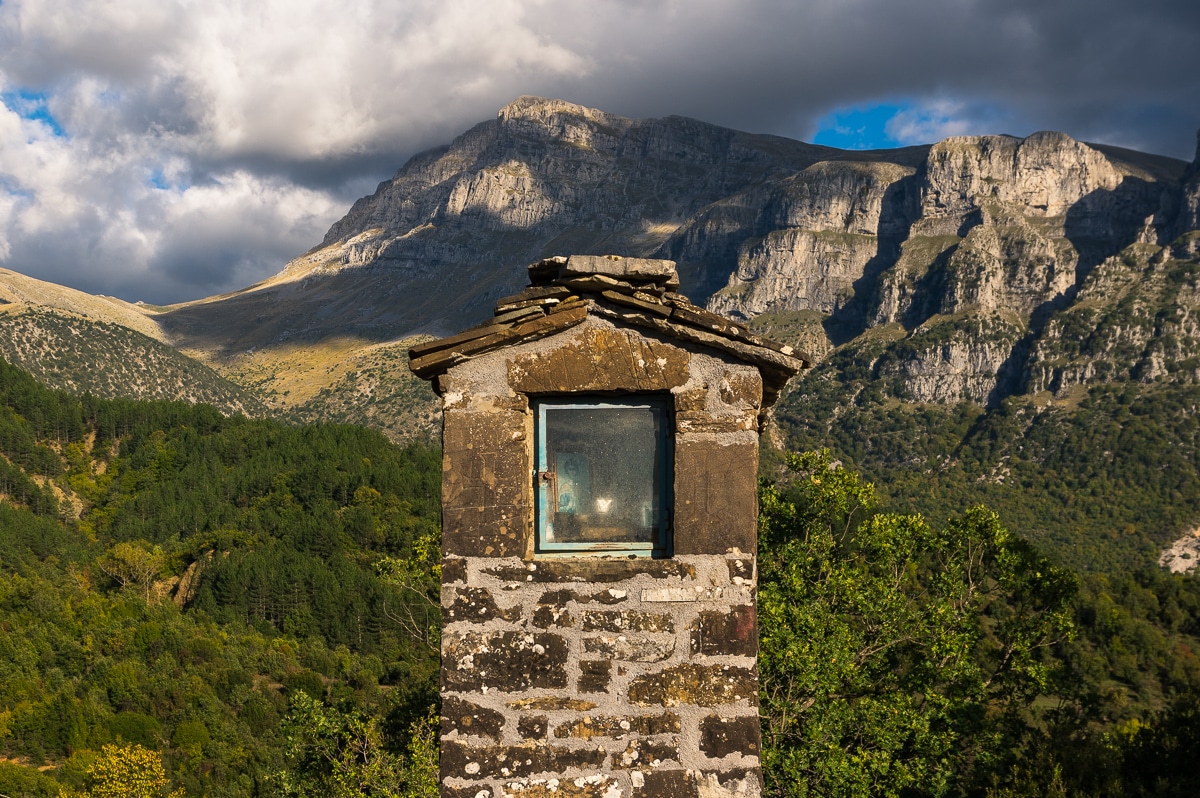 For once more the weather was perfect. We grabbed a last bite, loaded the car and set for the trail. Five minutes later, we got out on a small dirt road just past Aristi bridge.

It wasn’t long before we heard Voidomatis echo in the forest and soon we were hiking on its right bank. The turquoise gargling water of the river was flowing calmly through the landscape.

Again the trail was easy. Mostly flat and for the few sections where the path briefly deviated from the river, there were clear marks showing the way. I spotted a few locations that would make amazing camping sites for the summer. Except for some people rafting down the river, we didn’t see any hikers until we reached the bridge of Kleidonia. 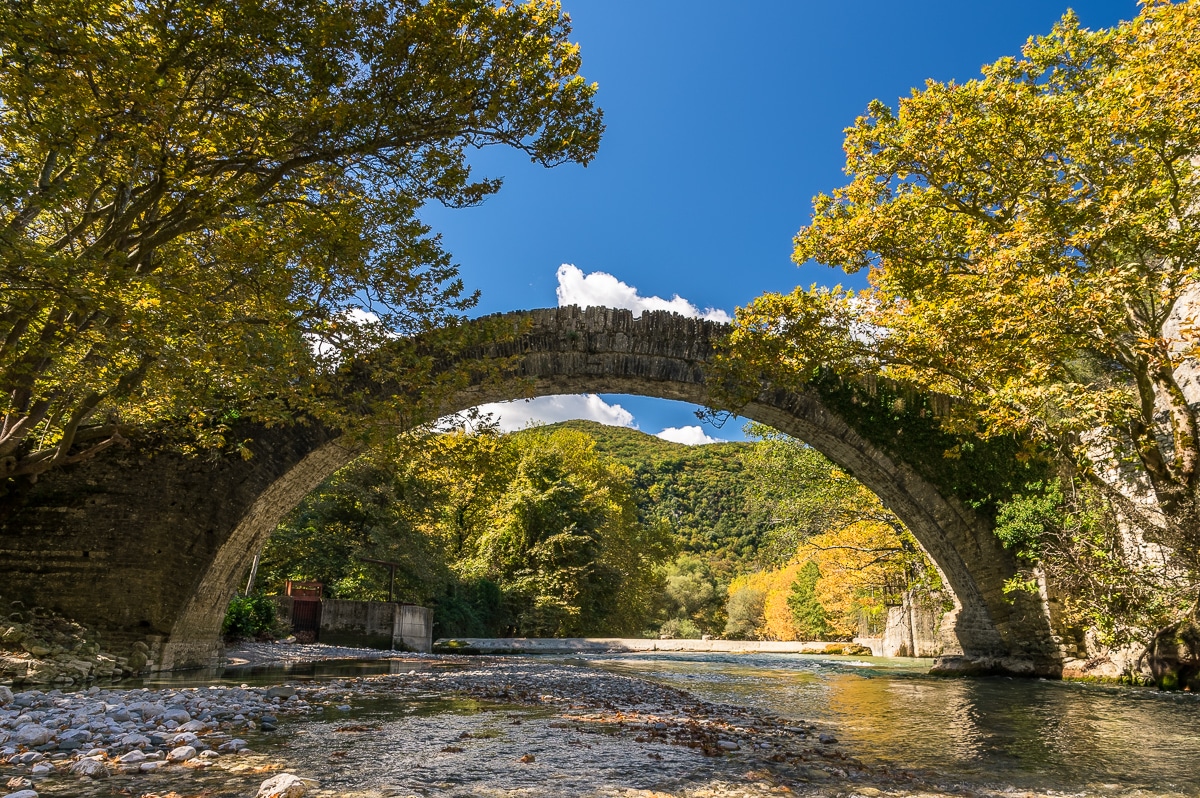 This bridge or more accurately the previous that stood on its place, is known for a crime that happened during the 16th century, and the bloody vendetta that followed after, deserting a village of 700 people.

That village was Agios Minas. Two big families lived and prospected there among others. They were called Gereni and Stamati and they even jointly built the village’s church out of their pockets. But a great rivalry creeped in. They say it was a matter of honor but nobody knows the exact reason.

It all happened on Gereni’s daughter wedding day. Stamatis who didn’t want the wedding to take place, set an ambush with some of his relatives and the moment the bridal march was on the bridge, they opened fire. Gerenis with his wife and two of his nephews dropped dead.

This incident ignited an unprecedented vendetta which lasted for years and eventually forced the residents to abandon the village since not even the authorities (Ottoman empire) could bring back order.

Nikos was there waiting for us and I asked him if he could wait a bit for me to shoot the bridge from inside the river. I took my shoes off and got in. The chilling water was up to my knees. Voidomatis is one of the coldest rivers in Europe (4°C all year round). 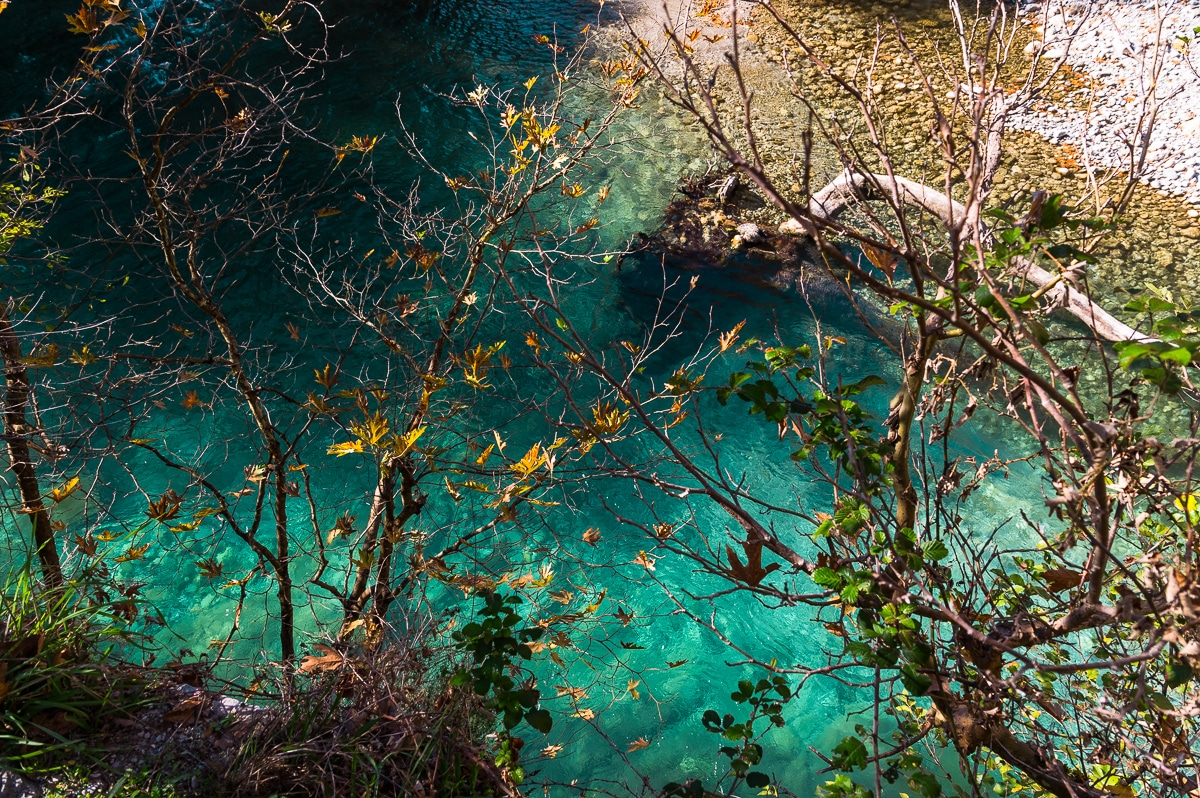 Nikos, seeing that our pace was a bit slow proposed to go straight to Ano Kleidonia by car instead of hiking so that we could take our time on the final section, and reach Megalo Papingo before sunset.

We both agreed. Rerouting is one of the luxuries you have when you are supported by a local guide.

Fifteen minutes later we were outside the village on top of a hill overlooking Konitsa plains where Voidomatis joins Aoos river. Ano Kleiodonia (or old Kleidonia) is a tiny little village which was abandoned for decades. Currently, less than ten people reside in it.

We sat by the beautiful church of Agios Athanasios and stayed there almost an hour enjoying the stunning view. I shot some pictures and a time lapse while having a bite with Veronika, who was ecstatic.

It was half past three when we packed and walked in the village. Ten houses and not a soul around—it looked like a far west scenery. Three dogs were barking at us but caused no problem. They were more excited than threatening, besides they were tied to the porch.

Out of the village we walked east, past a big antenna and found the trail for Papingo. It was ravishing. The path was marked with red dots, mostly on stones and was unfolding through the woods across the mountainous terrain.

The views to the east were breathtaking. We could see Vikos gorge and the Towers of Astraka standing guard at its exit. Also, for the first time the peak of Astraka was visible behind them. With my telephoto lens I could make out a tiny spot on the saddle just north of the peak. It was the refuge where we would spend the next night. Veronika couldn’t wait. Great ascends and mountain climbs are her element. 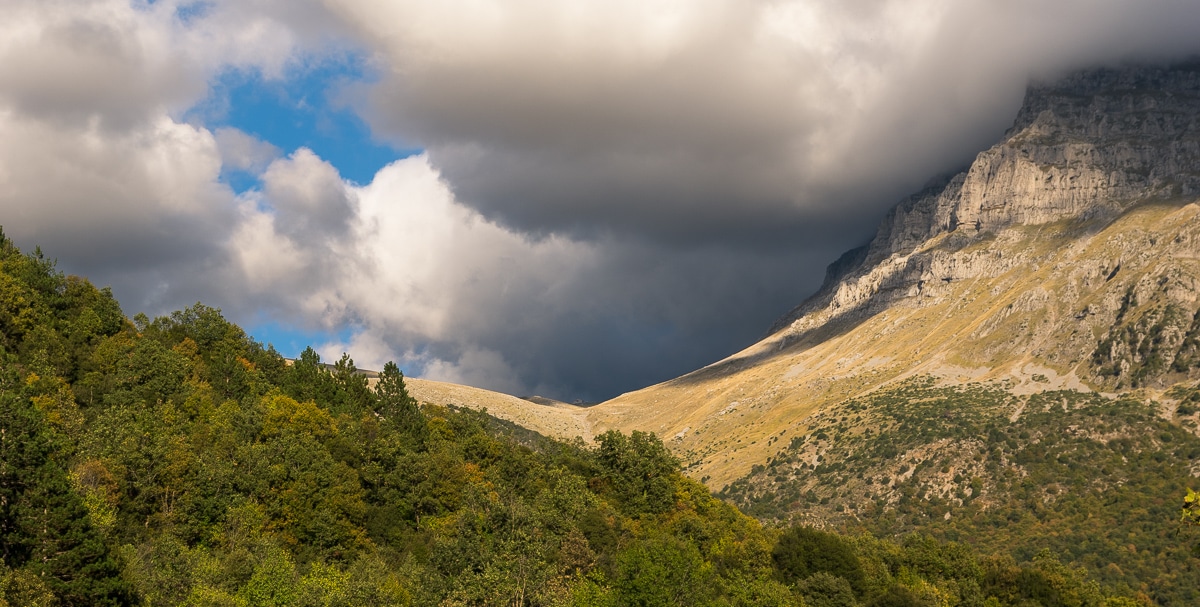 After an hour and a half we met a shrine and immediately, the beginning of a descending skala. This is a kind of stone–paved trail that people used to build on steep sections of the path network which connected the villages. The most famous is the one going up the highest village of Zagori—Vradeto. Since they are not regularly used nowadays, the communities stopped maintaining them and many don’t exist anymore.

The skala ended up on a dirt road which in turn led us to the old church of Agios Athanasios (it is devoted to Saint Athanasios like in Kleidonia) just outside the village. The view was magnificent. We were overlooking Megalo Papingo, with Astraka and its towers at the background. After two or three minutes, the dirt road changed into a calderimi which took us to the central square with the familiar plane tree. I called Nikos to let him know that we arrived and told him to send our transport after forty five minutes in order to have a coffee and watch the sunlight as it was fading away on the “towers.”

Our waiter was the first person we saw since Ano Kleidonia. The sunset was more than worth it and the coffee woke us up. I shot a short time–lapse and by the time we paid the bill, our transport had arrived. It would take us to Mikro Papingo, five minutes across the valley to spend the night. 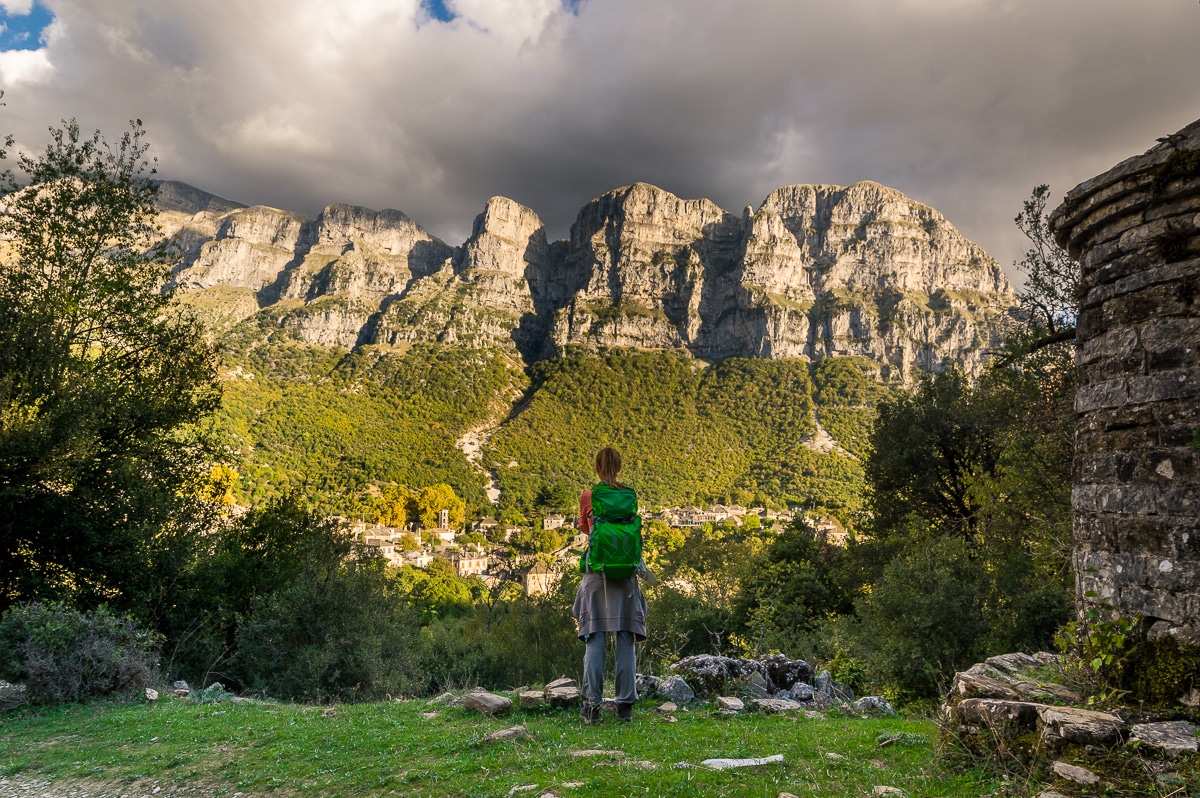 Mikro Papingo is probably the most atmospheric village of Zagori. It’s tiny with narrow alleys reminding a medieval settlement. Consequently, cars cannot go in and are left outside by the church of Taxiarhes

Our accommodation for the night was Dias Hotel. It was a cute little room with traditional Zagorisian decoration. We dropped the backpacks and went straight for a quick dinner which was good. We were a bit more tired than the previous day, so we went to bed early. I would wake up at six in the morning to shoot the natural pools of Rogovo stream just outside the village and then, we had a mountain to climb…

Next day : The Ascent 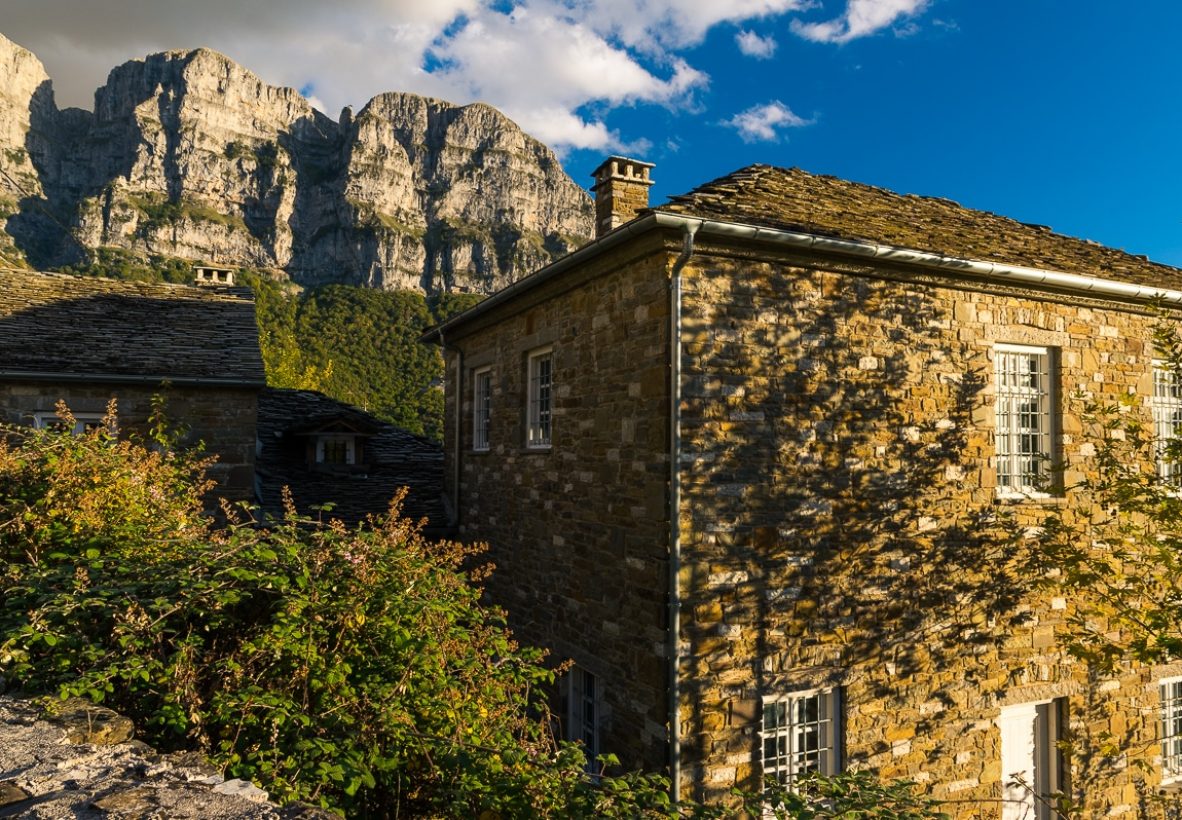 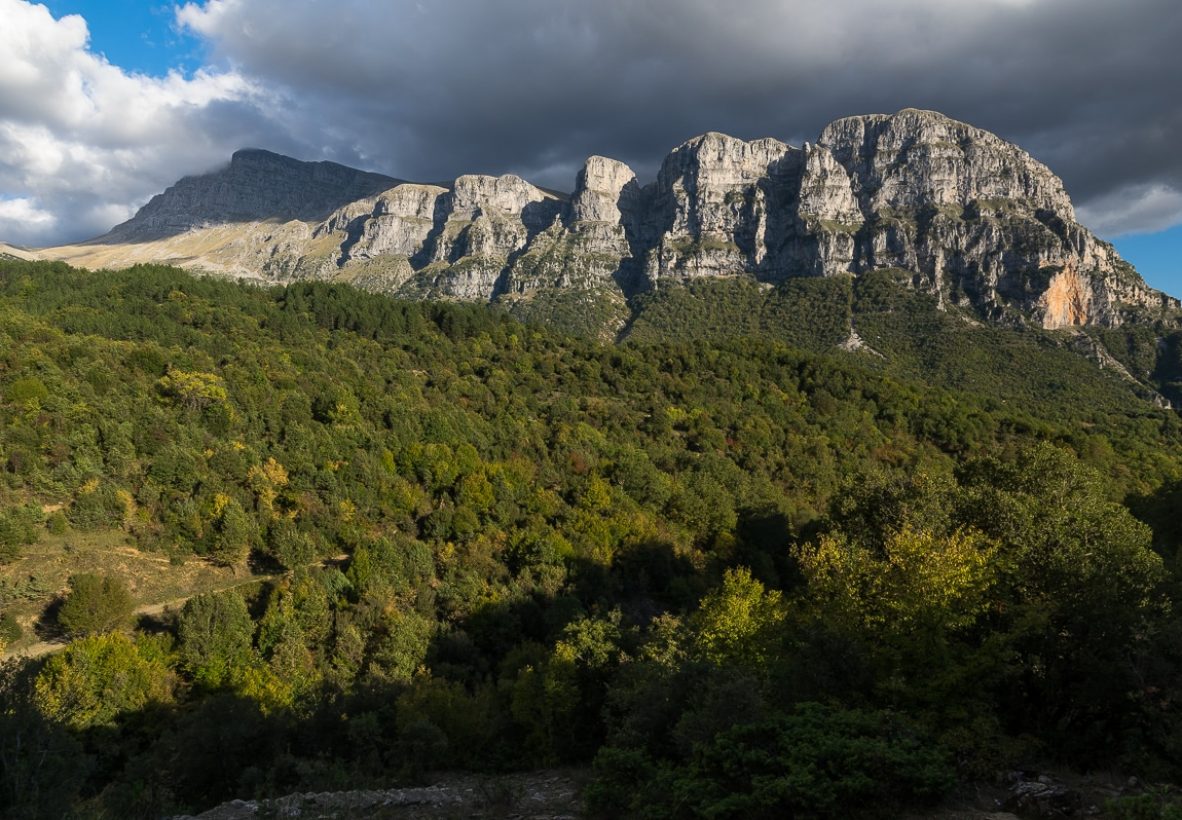 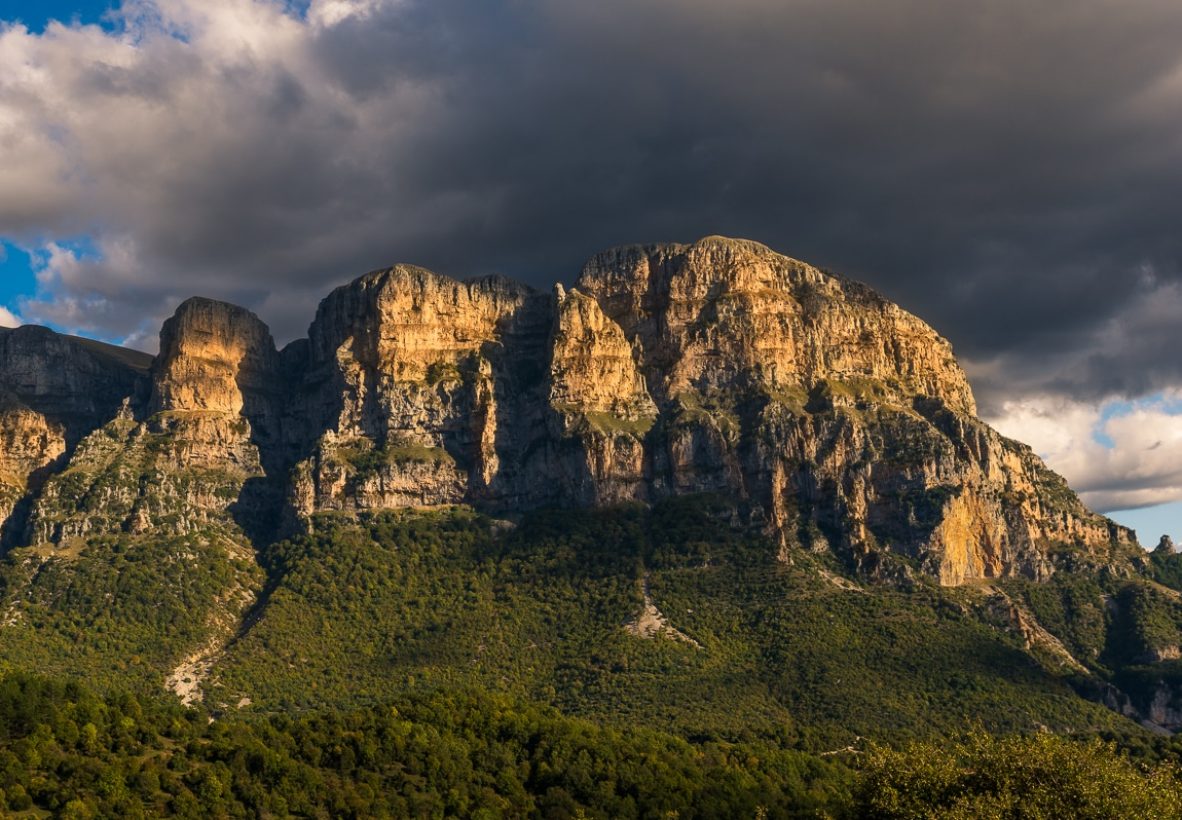 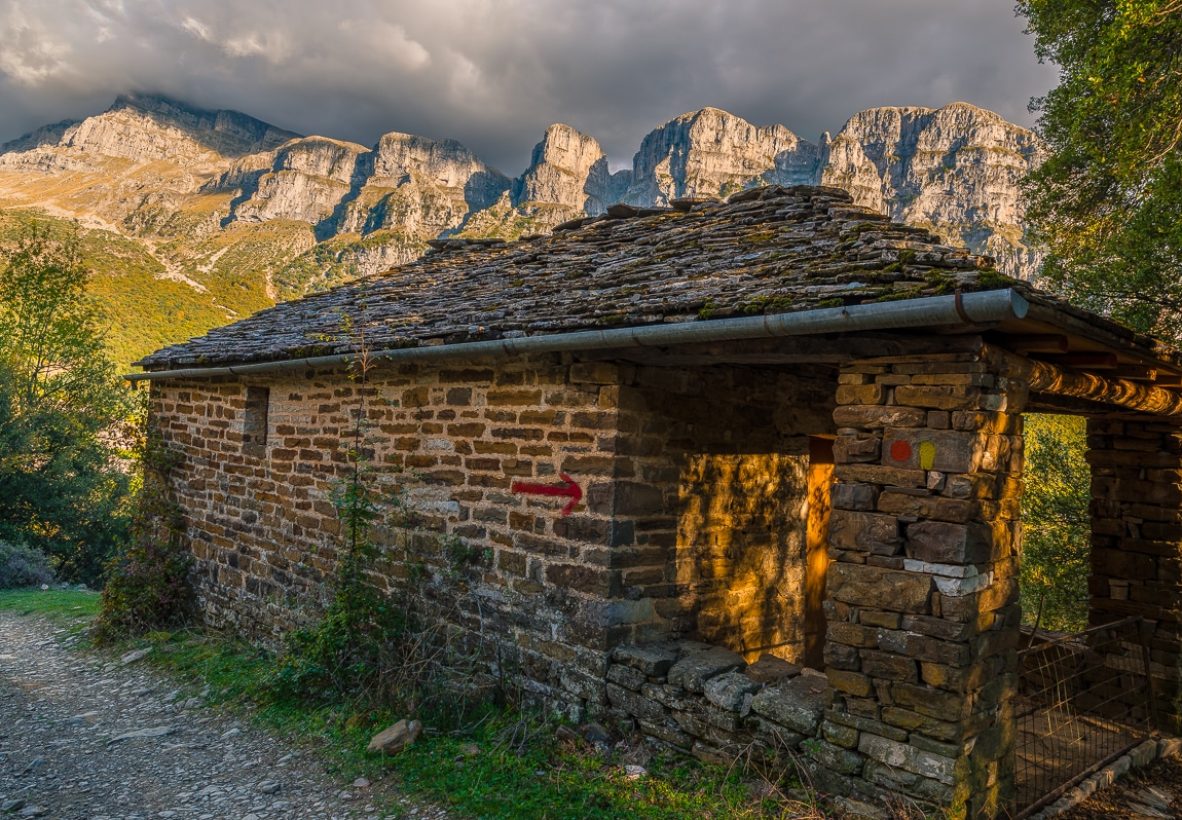 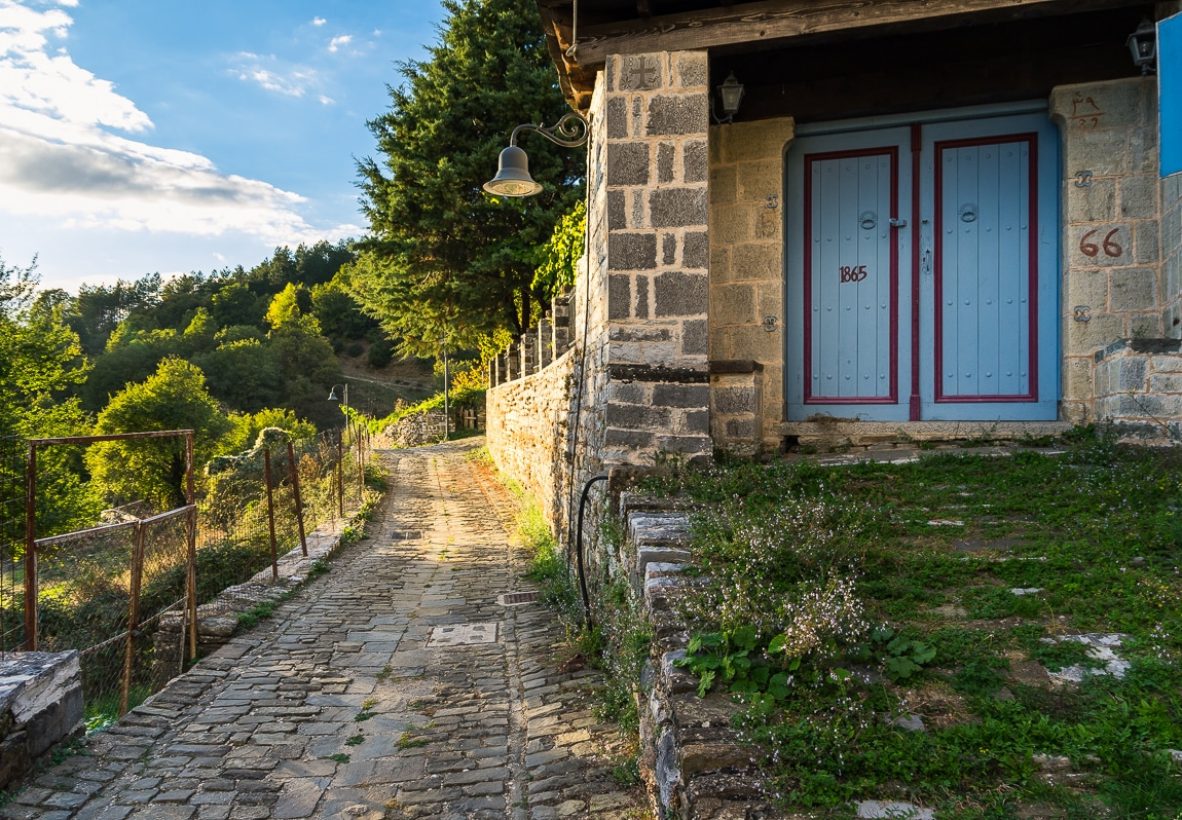 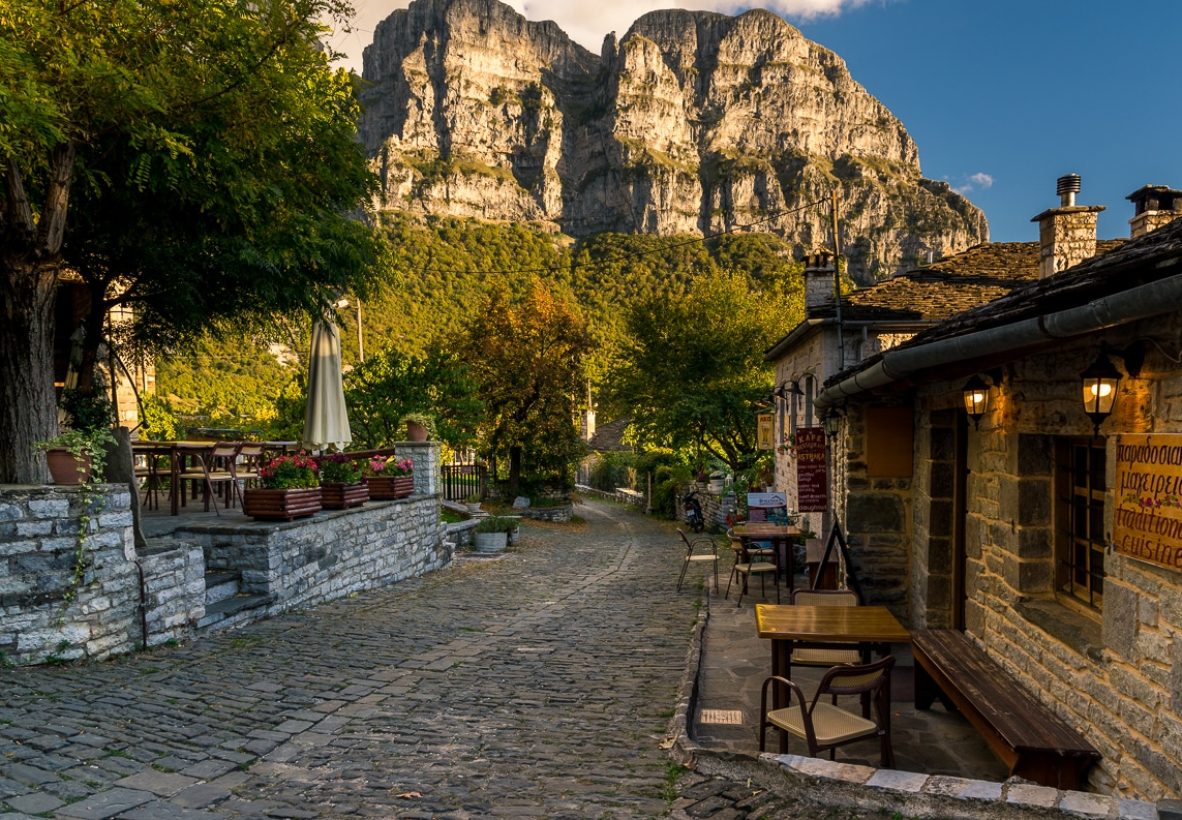